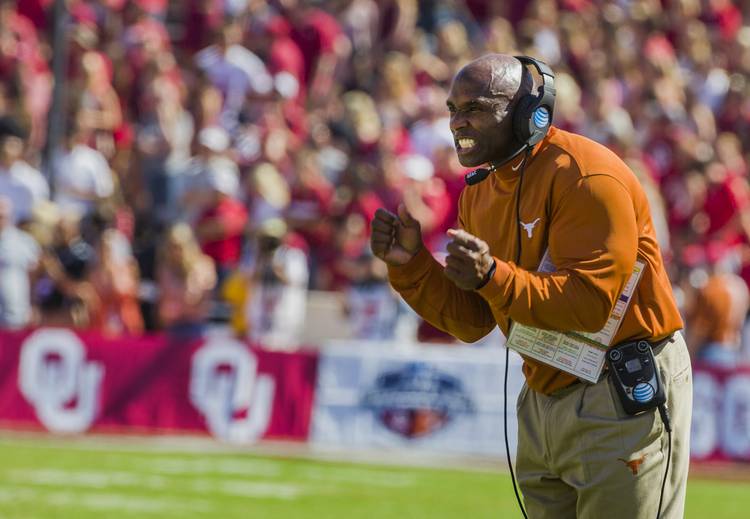 He awoke for no reason at 3:30 in the morning on Saturday, his mind racing. “I was wide awake,” he said.

So he arose from bed. He broke a sweat on the hotel treadmill, then went for a brisk five-mile jog on the grounds before the initial staff meeting at 5:45 a.m., just more than five hours before kickoff.

The Texas head coach could be excused for thinking about running all the way back to Louisville, given his poor record and awful set of happenstance since his arrival in Austin. Not that this state of mind is all that unusual for the second-year boss under fire.

Hours later, in the Cotton Bowl, his Longhorns had Oklahoma on the run. All day long.

Strong’s team played physical. It ran the ball 58 times and in such dominating fashion, Texas had not one but two 100-yard rushers, and quarterback Jerrod Heard had to pass only 11 times to avoid complete boredom. His defensive line wore out the Sooners and put OU quarterback Baker Mayfield on his back six times. When he was upright, Texas harassed him into short gains on scrambles. For much of the day, the quarterback was running for his life.

So was Charlie. He was running for his coaching life.

The finish line is a long ways off, but Strong finally got into the race with a resounding 24-17 win over 10th-ranked and unbeaten OU, spoiling the Sooners’ national title hopes and jump-starting a Texas program that sorely needed a shred of positive momentum. This was a breakthrough victory, but is meaningful only if the Longhorns follow it up with more such efforts and reach a bowl game for Strong’s second straight season. To do that, Texas must win four of its last six, though it does have three more home games with Kansas State, Kansas and Texas Tech.

“We looked God-awful last week,” a relieved Strong said of the 50-7 beatdown by TCU. “The players were saying they didn’t want me to get fired.”

National pundits were calling for Strong’s head, but he never let that bother him. He knows he’s not out of the woods yet, not with an 8-11 record overall, but it’s a robust, fresh start. His boss liked it.

“A couple of plays here and there, and we could be 4-2 instead of 2-4,” said Texas athletic director Mike Perrin, who said he went to Tuesday’s practice and liked what he saw. “I feel good about it. Not only does this win show he can coach, but he can also motivate. These young men left everything on the field against a really good football team.”

Thursday’s practice was even better. At the staff meeting the following morning, Strong told his assistants that he “won’t be shocked” if the team played unbelievably well against OU. And it did for 60 sustained minutes, which suggests many more positive Saturdays. The team showed it can.

There was no fluke. There were no bitterly contested officiating calls. Texas didn’t resort to trick plays, unless you call a pass a trick play. Moreso, it was the consummate team effort. As well as Juice Heard played, his backup, Tyrone Swoopes, also was outstanding, throwing a touchdown pass and running for another. Play-caller Jay Norvell deserves a huge pat on the back for resurrecting Swoopes.

Texas may be the best 2-4 team in the country, as absurd as that sounds, if you judge only by the impressive win over OU.

In his finest performance since he was hired to replace Mack Brown, he thoroughly out-coached his counterpart. Bob Stoops wasted timeouts, forgot how to teach tackling and was left grasping for answers against a Texas team that ran with abandon.

Strong’s first win in this rivalry left him relieved and happy for his players. Texas’ painful 1-4 start was taking its toll on the 55-year-old coach who is desperately trying to get traction for his program. The late Darrell Royal, the man who made this program and stamped it with the same pride the team showed Saturday, retired at the age of 52. Now it’s Strong who, like DKR, hopes to dance with what brung him — a run-dominated offense, a physical defense, no special teams mistakes and a mentally strong team.

This win buys Strong some time and validates what he’s selling, although he can’t take any steps backward. Texas’ next three are winnable games: Home against beat-up Kansas State, then at lowly Iowa State, then home against even lower Kansas. Win those, and Texas is 5-4 and has a chance to reverse this tidal wave of negativity and show progress.

“Charlie has poured himself into these players,” Norvell said. “He’s a people person. He has never blamed the players.”

Strong has never lost his patience or his cool. He’s been a rock through all the upheaval with a new president, new AD, new play-caller and a slew of inexperienced freshmen in key roles. He’s relied on old hands like former boss Lou Holtz and his predecessor, Mack.

Strong undoubtedly is a good head coach. But without positive results, that statement has no meaning, no validation. He got that for the first time with a signature win over Texas’ No. 1 arch-rival despite being a 17-point underdog.

Strong said he’s preached consistency and faith to his team. He’s been unwavering.

“Every day they hear from me, ‘You’re a good team. You’re good players. You have to keep battling,'” Strong said. “There’s no quit in this team.”

Nor in Charlie. Now maybe he’ll get a good night’s sleep. And then it’s back to work.