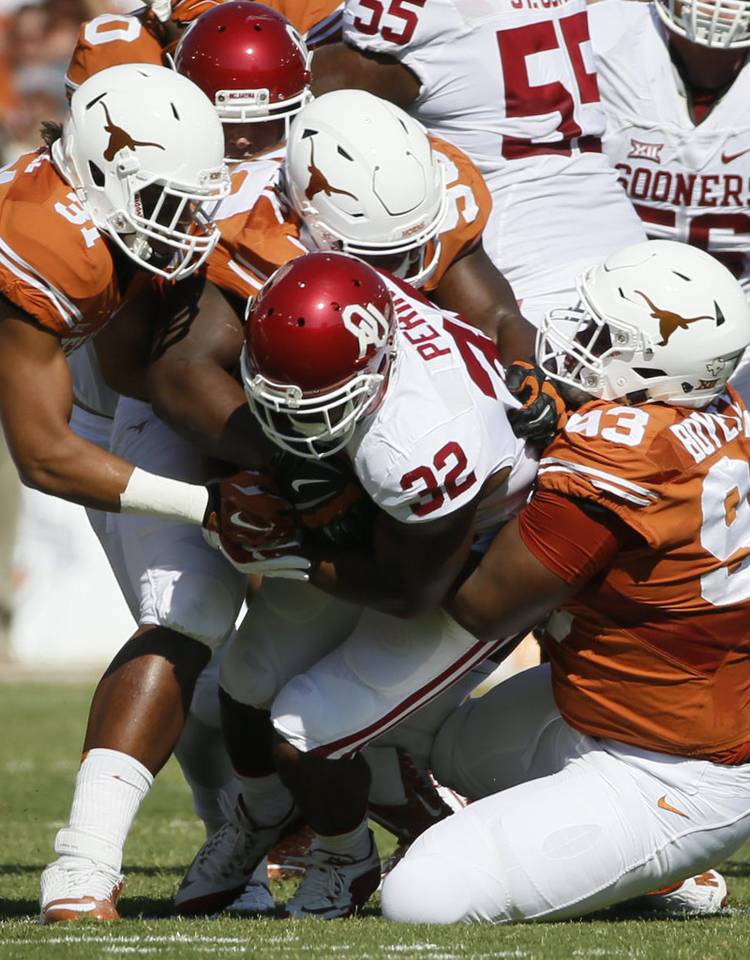 DALLAS — Turns out they weren’t serving deep-fried Charlie Strong at the State Fair after all.

Instead, it was the Texas defense dishing up some Sooner Surprise on Saturday.

The defense shut Oklahoma down and delivered some feel-good football to a win-starved fan base that spent the past week in the ice tub after the TCU annihilation. Only a rivalry win like this could calm the turbulence in his program, and in Strong’s 19th game at Texas, his team did it the way he likes it: Defense leading the way.

Texas leading wire to wire in an upset? I didn’t see this coming, and for the ones who honestly believed the Horns would win, please send me six numbers for Wednesday night’s Texas Lotto drawing.

Good for Charlie. He laughed for the first time in what seems like forever, and while that Golden Hat-and-burnt orange mock turtleneck combination won’t get him any runway invites, the Longhorns are sitting much prettier at 2-4 than 1-5.

So much rain has fallen since Strong took over this program that you could see the relief on his face. For one afternoon, the Longhorns actually followed his original blueprint for success — ball control on offense and, most important, a violent mentality on defense.

“All week long we (said) we were going to pressure,” Strong said. “I guaranteed you early that we would pressure every snap.”

Pressure they did. I’m not sure TCU’s Trevone Boykin even noticed them last week. Then they unexpectedly show up as the big bully on the block against their fiercest rival.

Give it up for a defense that gave up very little Saturday. The Horns somehow culled together the horrific experience that was 50-7 in Fort Worth and played with passion, precision and purpose against the nation’s ninth-highest scoring team.

It was a comprehensive defensive masterpiece served up by Strong and coordinator Vance Bedford, who hasn’t exactly been a whiz in the football kitchen lately. His crew was downright nasty for four quarters. They held reigning Big 12 rushing champion Samaje Perine to 36 yards on 10 carries, 15 of which came on one play, and got after the Sooners quarterback all day long.

Baker Mayfield sprinted down the field with both Horns down in pregame, then spent the rest of the afternoon trying to avoid being gored by Texas’ burnt orange snorters up front. The Horns, who had only seven sacks in their first five games, dropped him six times for 45 yards in losses. OU quarterbacks were sacked only 10 times in the first four games.

Even when Mayfield made plays — and he certainly was clutch on a fourth-down scramble that kept the Sooners in the game in the fourth quarter — his head was on a swivel because Texas spent most of the afternoon in the Oklahoma backfield.

“We knew he couldn’t make accurate throws on the move,” said defensive tackle Paul Boyette, Jr. “So that was the whole plan moving forward … to make him move his feet and make him feel our presence.”

So what changed? That’s an easy one. The defense finally got tired of being bad and decided to do something about it. This was bigger than Xs and Os. It was all about effort and desire by a group that wasn’t expected to beat the Sooners.

“It was passion, heart, and energy,” said linebacker Malik Jefferson, who had two sacks. “It was a little bit of everything, and everybody had it today.”

Now if Bedford can just  bottle up that formula and reproduce it over the next six games, the Horns may actually find themselves playing in a (gasp) bowl game. Realistically, we can’t be certain which defense will show up against Kansas State after the bye week, but for one glorious afternoon, the Longhorns provided proof that playmakers are capable of doing big things on the other side of the ball.

Strong summed it up best, and this applies especially to the defense:

Bohls: Huge win, but much work for Strong before he sleeps easily