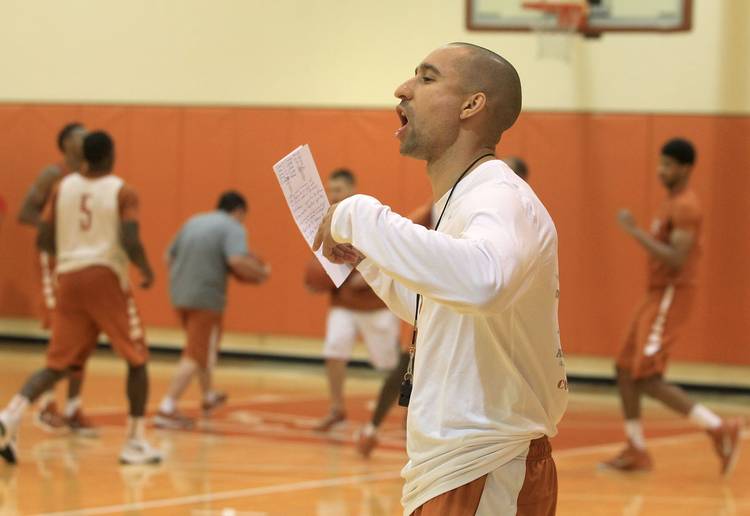 Shaka Smart didn’t travel to Dallas to watch the Texas-OU game. There was basketball business to be handled back at the house.

But he was watching. While he worked on the practice plan for the week and other duties that come with his new gig, Texas’ basketball coach kept an eye on a flat screen in his office that was tuned in to his buddy Charlie Strong’s Red River redemption.

“I get really into the games, because I consider Charlie a close friend,” Smart said Tuesday.

Smart pulled several lessons out of the football team’s program-turning win over Oklahoma. He talks to Strong, so one can assume he was well aware of the locker room tension that existed after the Horns dropped three straight games, including what could have been a soul-taking 50-7 loss at TCU. The OU win was a real hope creator that has spread throughout Texas athletics.

Smart and Strong are both in the same business with the same mission.  As Smart prepares for his first season, he has already shared an important team-building lesson with his players. He realized the win was much bigger than just the final score and told his team as much. The basketball team’s theme for the week was “collective enthusiasm,” something that was dripping from the pores of Strong’s team as it answered the call despite being a 17-point underdog.

“They just had a different edge,” Smart said.  “They had a different way about them. They hit harder. They were more connected as a group. I don’t know what was said inside the locker room or anything like that, but that was a different football team from the outside looking in.”

It takes more than Xs and Os to win in big-time collegiate sports, and Smart is a big believer in the game within the game. He took a few psychology courses in college and earned a reputation for embracing the mental side of the game just as much as the physical havoc his teams have been known to create on both ends of the court.

It’s part of the reason he pointed to the OU win as such an important teaching tool.

The changing of a culture doesn’t happen overnight. Smart has taken some important mental notes during Chuck’s up-and-down sophomore season. He understands that the pressure will be on him to post great numbers out of the gate — they expect instant success in these parts — because Rick Barnes left plenty of groceries in the fridge, including point guard Isaiah Taylor, big Cam Ridley and Prince Ibeh, forward Connor Lammert, guard Javan Felix and the ultimate glue guy, DeMarcus Holland.

Add freshman guard Kerwin Roach and some other potential contributors and Smart’s team has the look of a potential winner, which is different from reserving a book of hotel rooms for the Final Four in Houston before Game 1. Baby steps.

Like Strong’s predecessor, Barnes had some success but was ultimately let go because he couldn’t extricate his program from a stale patch of underachieving seasons. The Horns haven’t played in an Elite Eight game since D.J. Augustin and Memphis’ Derrick Rose squared off in the 2008 South Regional Final in Houston, and now pin their hopes on a 38-year-old Energizer Bunny whose goal is have his team play as fast as he coaches.

Strong and Smart are inexorably bound, not only because former athletic director Steve Patterson brought them in to replace a pair of long timers, but also because they  became the first two black coaches to head the two biggest team sports on campus. Cultural angles aside, the two will be joined at the hip for a good long while, assuming the basketball team meets or exceeds its potential and the football team trends upward next season.

By the time hoops  officially tips off the season against Washington in China on Nov. 13, football will be nine games into the season and maybe (just maybe) sitting at 5-4. And who knows, the football team just might must put up a few more signature wins that Smart can apply as teachable moments for the guys that play indoors.

“If we can decide that the game is more important than any one of us can do individually, then we can do some great things,” he said.