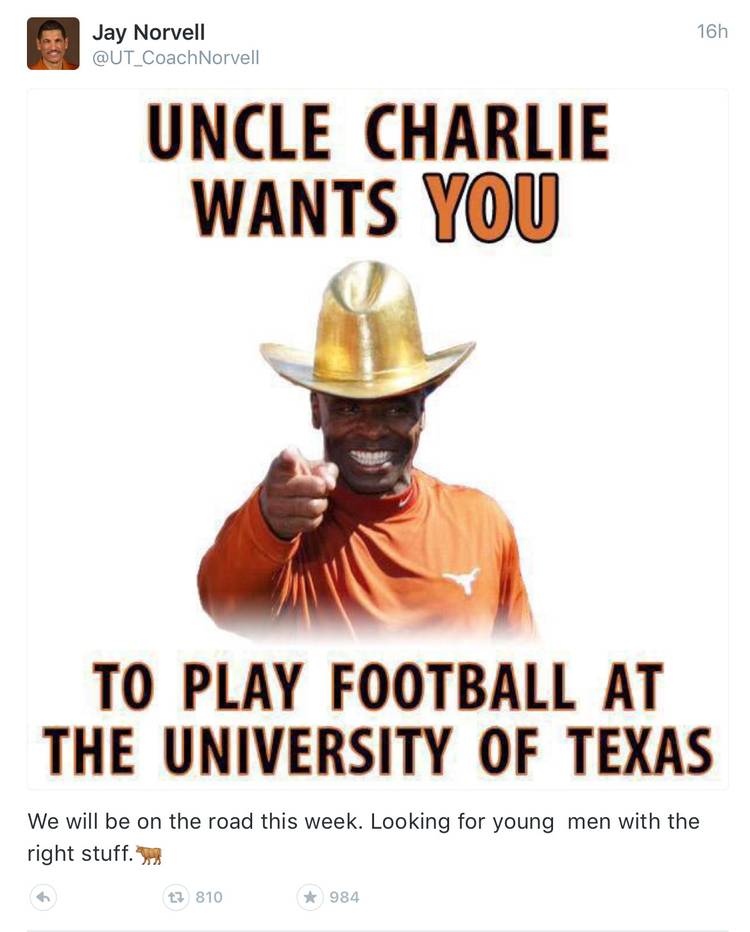 Texas play-caller Jay Norvell tweeted out this photo after this past season's win over Oklahoma. The UT coaches immediately hit the road recruiting.

Other schools gobble up commitments from high school juniors going into their senior seasons. Strong wants to see how their senior years play out. He believes some recruits are simply “making reservations” with no real intent on going there.

Other schools showcase 21st-century locker rooms, barber shop chairs and waterfalls in the training room. This could be get-off-my-lawn thinking, but Strong doesn’t believe he needs all that to be successful.

Other schools use social media flash and make promises about playing time and championships. Strong talks to recruits, or more specifically their parents, about core values and the literal value of a University of Texas degree.

While that sounds fantastic in a utopian college football society, the numbers here in October bring you back down to Earth. Texas has only nine commitments for its 2016 class while Texas A&M has 16 and counting. Baylor, TCU and Oklahoma State all have 15 each. Oklahoma checks in with 11.

According to Rivals’ national recruiting rankings, the Horns currently sit 57th nationally, just ahead of Louisiana Tech. In the Big 12 pecking order, that’s good enough for seventh, ahead of Kansas, Kansas State and Iowa State.

The 2017 class is getting some traction, though. The Horns got a commitment from Bullard tight end Major Tennison on Wednesday night. Then, Texarkana Liberty-Eylau defensive end Lagaryonn Carson, one of the nation’s best linemen, committed on Thursday. The 2017 class now has four commitments.

But 2016 is front and center. It cannot be overstated how important it is for Texas to put another solid class behind the 2015 group, which was considered a top-10 collection by most recruiting services. A majority of those recruits are now on the field playing as freshmen. Strong must bring in another bushel of potential every-down players.

That’s why this off week is so critical. UT coaches fanned out Thursday and Friday to see as many recruits and games possible. The Horns are 2-4, but with last week’s win over Oklahoma, Strong’s assistants now have something to tout.

Let’s be honest: What could this staff have sold before last week? Every coach sells playing time. Every coach touts the value of a college degree. Every coach believes his program is the best.

Strong believes Texas should sell itself, and he’ll get no argument from devotees like Malik Jefferson or Jerrod Heard. But today’s recruits look at Baylor and see a possible three-time Big 12 champion. They look at TCU and see a possible playoff contender. The Aggies are currently  tied for first in the SEC West.

Strong has to convince 17-year-olds, many of whom have probably never been challenged athletically in their life, that there is value in building something from the ground up. To do that, he must convince them Texas is cool.

That’s why linebackers coach Brian Jean-Mary tweeted out multiple times from the Austin City Limits music festival last week, some including Drake. The Horns have only an average presence on social media. Auburn tracks every team’s social media footprint and ranks the top 25 on Facebook, Twitter, etc.

That’s where Strong’s support staff comes in. Mike Giglio leads a four-person recruiting staff, according to the UT website. Texas offers no biographical information on Giglio, and he was not made available for this story. Nor did Giglio respond to emailed questions from the American-Statesman.

According to his LinkedIn profile, Giglio graduated from Florida with two degrees, started helping the Gators with recruiting and went to Louisville with Strong in 2010. What exactly does Giglio do? According to NCAA rules, non-coaching staff members are not allowed to make or receive calls from prospects or their coaches or engage in off-campus recruiting.

“He goes and finds out all the information on every recruit and he passes it to the position coach,” Strong said. “So every coach, every position coach is responsible for recruiting his position. So then what I do is come in behind all of them.”

Again, from the decision to wait longer in the process to who oversees it on a day-to-day basis, football recruiting at Texas requires a leap of faith. Should Strong be worried?

“No, because I always say this. Signing day is not until the first Wednesday (of February), not until that day,” he said. “So they commit and then mid-semester, we’re going to still recruit them.”