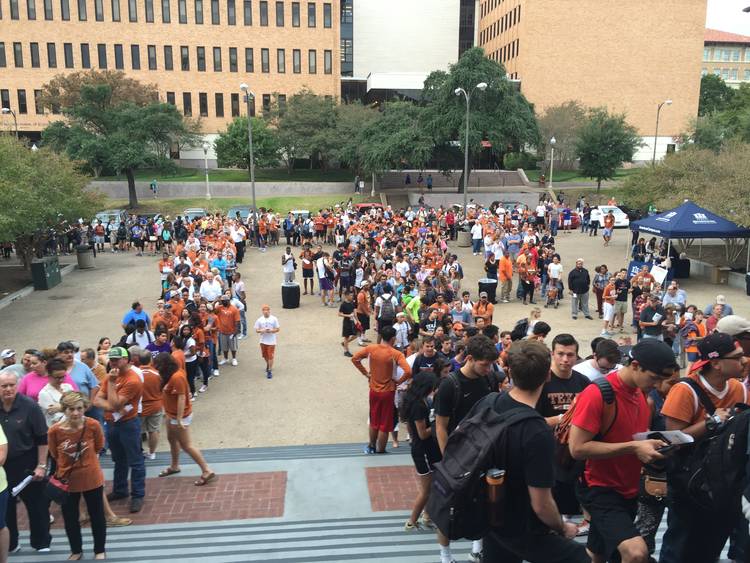 Normally, this space is labeled “Eyes on Texas,” but these eyes simply couldn’t believe what they saw Wednesday night outside Gregory Gym.

Thousands of fans lined up an hour before the doors opened just so they could watch a Texas men’s basketball scrimmage. The line snaked around the corner at Speedway and 21st Street and stretched nearly to Royal-Memorial Stadium.

All those people … for practice.

New Texas coach Shaka Smart had to be impressed. And why not? Texas is a basketball power! A basketball force? Blue blood?

Well, Texas has a basketball team, of this we can be sure.

The announced crowd of 3,129 fans jammed the facility. When configured for basketball, the 85-year-old gym holds 3,200, a school official said.

“I told the guys let’s stop and say hi to everyone and thank them for coming,” Smart said after the 30-minute intrasquad scrimmage. “It means a lot, particular in mid-October when we’re still a long way away, really a month away, from our first home game.

“But it’s a great sign for our team and our guys that if we do play with enthusiasm and aggressiveness and do play together and make good things happen on the floor, there’s going to be a lot of support here,” he added.

It was an interesting mix, too. Older fans stuffed the upper deck while current students took the seats down low. Members of the UT women’s team were there, as were a handful of men’s recruits, including five-star center Jarrett Allen of St. Stephen’s.

Everyone wanted a sneak peek at what the Longhorns have been doing. Is this team playing faster? Are they diving after loose balls and playing with reckless abandon? Bottom line: Is this team any better than last year’s?

It’s way too early to tell, frankly. There were some individual notables, though:

“I’m only like 6-7 on a good day with some shoes on,” said Cleare, who joked about his lack of length compared to teammates. “So I’m not really giant like Prince and Cam who have 7-foot wingspans, with my little T-Rexes (arms) here. I have to use my body, so I have to be crafty in the paint area. But I have a lot of work to do.”

From a team perspective, Smart simply wants to see more nastiness, more edge. Some players have it, but overall, “we’re still working on that,” he said.

It’s hard to get nasty with teammates considering they’ve been practicing all month. The first exhibition game isn’t until Nov. 6, and the season opener isn’t until Nov. 13. So there’s plenty of boring, old practices still to come.

That’s why Smart liked the environment Wednesday night. All those fans created a spark, a different vibe.

“This is going to be a really valuable tape for us moving forward,” Smart said. “There’s a ton of things that we can point to them and say this isn’t what we do. But that’s OK. Basketball is a game of mistakes, and we’re going to learn from those mistakes.”

Everything about Texas basketball has a different vibe these days. Such is life at a basketball school.