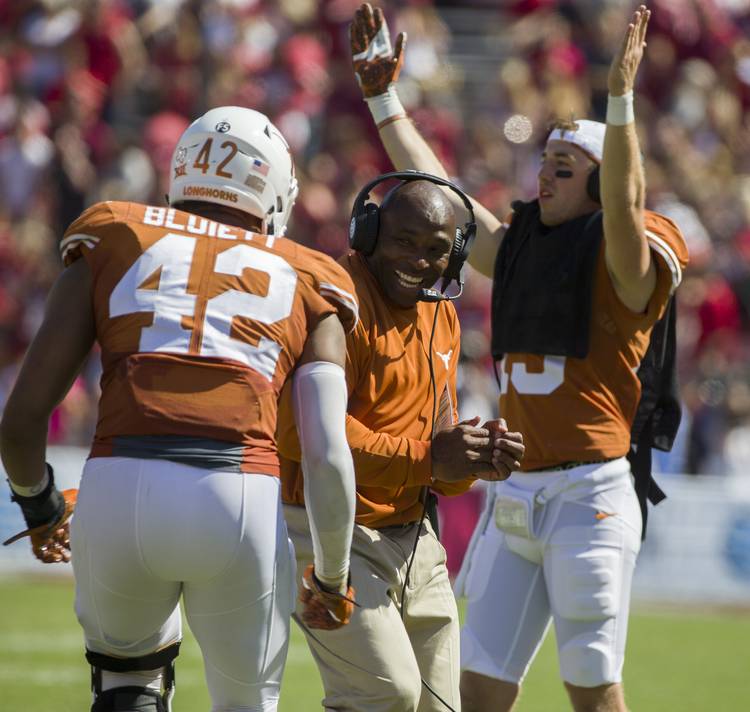 Memo to Longhorn Nation: You have more in common with the reeling Kansas State Wildcats than you think.

“I was watching the (Kansas State-Oklahoma) game and that wasn’t the K-State I thought I would see,” said Texas safety Duke Thomas.

Sure, the Cats are reeling after OU smoked them 55-0 at Bill Snyder Family Stadium last week.

Sure, Thomas and the fan base are emboldened after that unforeseen spanking of the Sooners two weeks ago.

Now the Bevo backers are using phrases like “get on a roll” and “play in a bowl game.” It’s amazing how thoughts have turned away from questioning your embattled head coach and toward making it to a bowl game after that brutal 1-4 start.

Charlie Strong doesn’t need me to tell him that the old man on the other sideline has done more with less than any coach in the history of the college game. Plus, Snyder has become accustomed to handing it to Texas over the last decade. K-State football has won six of the last seven meetings dating back to the year after Texas won the 2005 national championship.

Shoot, even after Snyder first retired following the 2005 season, the Wildcats were befuddling the Longhorns. His replacement, Ron Prince, scored 40-plus on Mack Brown in the next two meetings, including a 20-point drubbing in Austin back in 2007. A then-unheralded wideout by the name of Jordy Nelson shot up the NFL’s draft charts that day with 12 catches for 116 yards, a touchdown and an 89-yard punt return for a touchdown.

Snyder came out of retirement in 2008 and has continued his school’s mastery of the Horns with three wins in the last four meetings, including the 23-0 drubbing last season, the first shutout handed to Texas since OU’s 12-0 win in 2004.

We’ll all agree that 12-0 isn’t close to the 55-0 result that OU put on K-State, or even 50-7 — that was Texas on the business end at TCU — but the Horns would be well served to take the Wildcats more seriously than the Sooners took Texas at the Cotton Bowl.

If you took a closer look at it, the similarities between today’s K-State team and the Texas of two weeks ago are evident.

Texas dropped a pair of heartbreakers to Cal and Oklahoma State before the dismemberment in Fort Worth. Somehow, the Horns were able to literally pull themselves back together for that season-saving win over Oklahoma.

“One thing about the players in this program, they know what the standards are, and they try to live up to them,” Strong said. “I know it hasn’t been the way we would love for it to be, but they’re still going to work and do everything you ask them to do, and it wasn’t where you felt like the earth was falling in on us. It was never that.”

Strong’s injury-plagued opponent will come in here with some pride on the line. The Wildcats blew leads of 15 and 18 points in losses to Oklahoma State and TCU before the OU undoing. The worst blowout loss of the Snyder era prompted the face of the program to write a  letter of apology to Kansas State’s students.

“I know you are pained by the outcome, as I am,” Snyder wrote. “I hope you will appreciate our players for never giving up even in the face of adversity and the loss of so many of their teammates.”

Sound familiar? Proud college football coach takes a critical hit and faces a crossroads game away from home against a team that’s favored to hold serve at home.

This may sound weird, but the Sooners didn’t do the Longhorns any favors with that beatdown.

The Horns realize they’re a 2-4 team and the only thing that will make us believe that the OU win was no fluke would be a win over K-State followed by a a first true road win over Iowa State.

The worst scenario would be Texas staring at a 2-5 record after breathing life into a wounded bunch.

“I see them with fire in their eyes,” senior running back Johnathan Gray said. “They’ve been in the doghouse this week and they’re going to try and come in and do what they can to try and win this game.”

Texas has been there.

Saturday is no time to go back.

Bohls: An ugly Texas win, but a pretty Texas victory