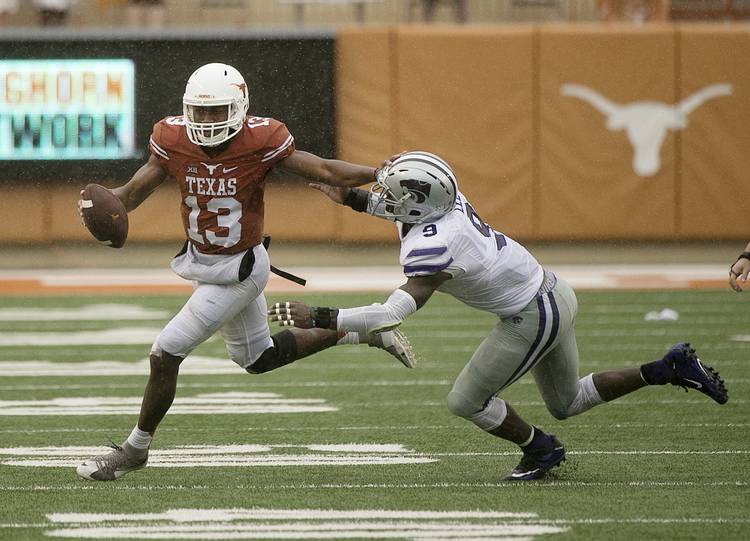 Jerrod Heard couldn’t grip the ball on Saturday, so Texas ran it.

And ran it some more.

Did I mention the Longhorns ran it 53 times?

It’s how Charlie Strong would prefer to win games: Down and dirty with two solid running backs, a quarterback with game-breaking moves in the open field and a defense that bends but doesn’t break.

Ground Chuck worked to the tune of a 23-9 win over weapon-challenged Kansas State in a torrential downpour at DKR, but that same recipe will be a struggle against better offenses like Texas Tech, West Virginia and Baylor moving forward.

Even two-win Iowa State — Texas’ next opponent — pulled out a big ol’ bottle of pesky against Baylor on Saturday, scoring 27 points in a loss despite being a 37-point underdog.

Now, I get that the most important goal was to get halfway to the six wins needed to qualify for yet another in-state bowl game, but in order to keep this momentum going, the Horns are going to have to get more from the passing game. Much more.

Heard’s first three completions came on six-inch shovel passes to Daje Johnson behind the line of scrimmage, which of course were designed to get the ball in the hands of Texas’ best playmaker not named Jerrod Heard. Nothing wrong with that, but there were opportunities to make plays down the field as well.

At one point early in the game,  Heard told Strong he couldn’t grip the ball, which was probably music to Strong’s ears since he was clearly not interested in putting the ball in the air when his power running game was working so well.

“If he was going to throw the ball, it was going to be a shot-put out there and I didn’t want the ball to kind of hang and then all of a sudden we turn the ball over,” Strong said.

In defense of the redshirt freshman, to ask Heard to throw what was the equivalent of small bowling ball downfield in those conditions was a bit unfair, especially when it wasn’t needed to get a win.

The smart play on this day was to rely on Heard’s legs and pound running backs Johnathan Gray and D’Onta Foreman against an injury-plagued K-State team that’s starting to resemble  the worst in recent memory under Bill Snyder.

So there wasn’t a need to pass, but that day is coming. Without the benefit of a degree in meteorology, I’m going to assume that the next few games won’t be played underneath a 100-yard waterfall, which means Heard will regain his grip on the ball and will have opportunities to get players like John Burt, Armanti Foreman, Marcus Johnson and Daje Johnson involved vertically.

While he’s nowhere near a finished product as a passer, Heard has shown an ability to connect on deep throws this season. He will have to if Texas has any hopes of getting to a bowl game because defenses have already figured out that they would rather keep in the pocket to throw than give him running lanes.

Baylor and Texas Tech are on a short list of the most explosive offenses in college football, and while Texas will make things interesting with their running backs and that improving offensive line, there will come a time when Heard will have to take to the air to get things done.

We got a glimpse in the third quarter when he completed a pair of passes to Caleb Bluiett and Burt to keep a drive going, but glimpses aren’t going to be enough when the high-octane offense come calling.

One thing I really like about Heard: He has unassailable confidence and the type of belief that will squeeze every drop of production out of himself and his teammates. Completing 10 of 15 passes for 99 yards isn’t going to scare anybody, but the kid has figured out how to win games here lately, and that means a lot in these parts considering how things have been over the last season and a half.

Heard told me he spent the entire offseason working on his accuracy while he was clearly the backup to Tyrone Swoopes, and those reps will come into play sooner than he may realize.

The Horns are a team making a move back to respectability,  but to take that next step, Heard will have to go from one-trick pony to two-trick thoroughbred.

Bohls: An ugly Texas win, but a pretty Texas victory