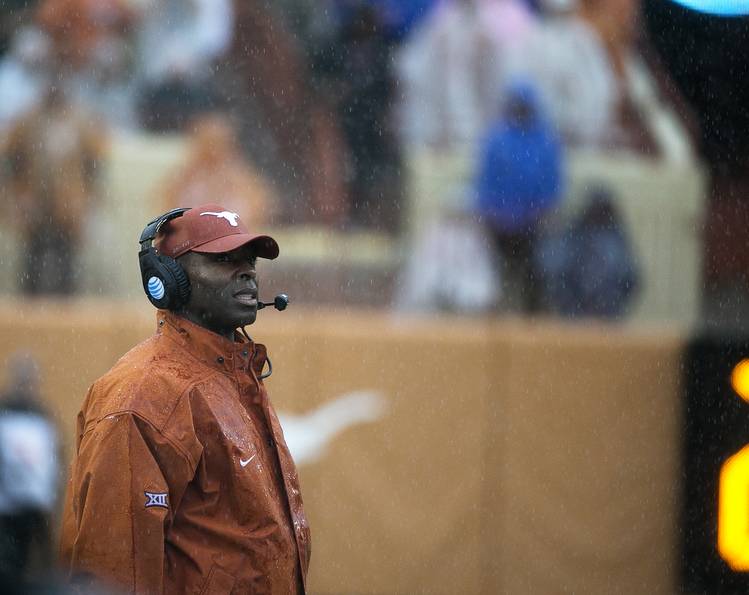 Texas coach Charlie Strong in the rain against Kansas State during the first half of their game at Royal Memorial Stadium on Saturday, October 24, 2015. DEBORAH CANNON / AMERICAN-STATESMAN

The very first question directed to Charlie Strong on Monday got right to the point.

So, Charlie, are you going to Miami?

Laughter ensued, much of it from the Texas head coach himself. Then, a proper denial.

He’s not. Why would he? But then, why should the Hurricanes even be looking for anyone at this point in time? Because that’s the nature of college sports today.

Strong’s full-bore into turning the corner on the job he has, which he calls “the best job in the country.” Besides, Al Golden, who made $2.5 million before he was terminated, made half of what Strong is pulling down, and Miami is trying to sell some coach on a slipping former powerhouse with a small fan base in a state and city dominated by pro sports. Strong ain’t buying, and there’s no reason he would. He has no interest in starting all over.

But that’s not the bigger issue today.

What in the name of 34 years-at-Florida State Bobby Bowden is going on? Why is Miami even looking for a replacement in October? Why are Miami, South Carolina, USC, Illinois, North Texas, Maryland and — well, who’s next, Iowa State? — looking for a new head coach before Halloween?

“You don’t know how much patience people really have now,” Strong said. “You have to have patience if you want to build it the right way.”

With the firing of Golden over the weekend, a staggering 84 of the 128 FBS programs have undergone head coaching changes within the past two years, according to The Washington Post. That includes eight firings at the 65 Power 5 conference schools, one of them Kansas’ Charlie Weis. USC has practically made midseason firings an art form, letting go of Lane Kiffin at the airport after a tough road loss and dismissing Steve Sarkisian this month after some much-publicized issues with alcohol.

So why the quick hooks? Lots of reasons.

Patience is too thin.

Salaries are too fat.

Too much pressure to win.

Fans are too restless.

The media is too intrusive.

College is the new NFL. Basically, that’s it. Colleges are mirroring the NFL more with every passing day. And that’s not a good thing. But doesn’t everyone copy the NFL these days? The NFL sets the bar from officiating supervisors to scheduling games overseas.

In that league, it’s nothing to make changes in midseason. Miami’s Joe Philbin barely made it off the plane from London and was pink-slipped. Aren’t the Oakland Raiders required by law to fire a head coach every season? They’ve had so many changes, the resident head coach’s parking slot at the football complex is named Reserved for Fill-in-the-Blank. I’m still shocked Bill O’Brien hasn’t been let go at Houston.

The trickle-down effect isn’t good for college campus. Strong mentioned the need for stability and a proper foundation. He talked about having a positive impact on athletes, helping them graduate. He’s right, of course, but do fans really care about that?

Regardless, college is rapidly entering the NFL world where coaches on both levels are on notice annually, depending on the size of their buyouts. Strong has no such worries with a five-year, fully guaranteed contract of $5 million a year. But this pattern of firing coaches at midseason should be an alarming trend to athletic directors and university presidents everywhere.

It’s the new facilities arms war. I can fire my coach before you do. And then, School X can get to the front of the line before School Y fires its coach in December.

So  it isn’t unusual for a coach like Strong to hear from national commentators that he’s on the hot seat at 1-4, then two games later be mentioned by folks at the same ESPN network that another program wants to hire him away at 3-4. You can’t get any more fickle than that.

As he should. That should be more than lip service on the college level even though graduation rates will never be considered on the same level as touchdown-interception ratios. Two years is hardly a proper amount of time for a coach to be evaluated, even if a coach like Strong has a 9-11 record.

Not everyone is cut out for coaching in a fish bowl like Texas, but it’s part of the territory. Strong understands that better than most, having coached at hotbeds like Notre Dame and Florida.

“It’s the university in general,” Longhorn center Taylor Doyle said. “When we do bad, people bash us. When we do well, we’re a team they raise up. But we don’t get caught up in all that.”

Strong gets that as well as anyone.

“I have a great job here,” he said. “I’ve got to get things done here. But I never thought I could keep the dogs off my heels. I knew they were going to come barking.”

And they did. Now they’re barking at someone else’s heels. That won’t change, and it’s one thing about college athletics that administrators can’t get a leash on.

Golden: A good win, but Heard is no passing fancy

Eyes on Texas: No reason to worry over the passing numbers just yet