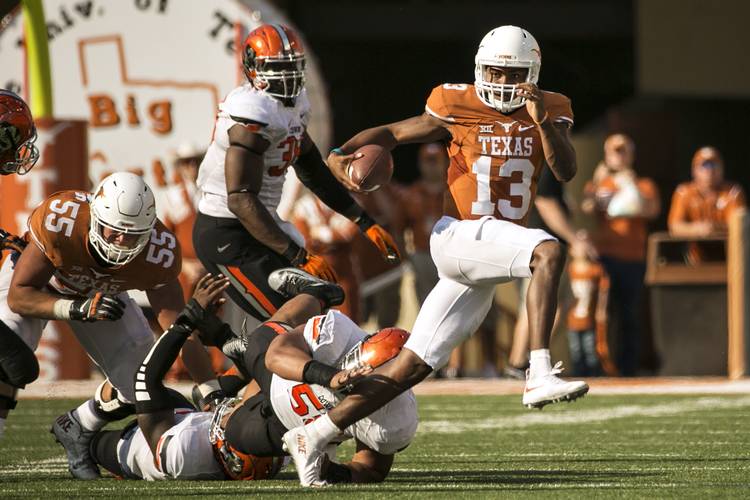 There are certain benefits to being a run-oriented team crafted in the head coach’s vision. You don’t have to worry too much about the passing game.

If Texas was a pass-happy group like Baylor or Texas Tech, then you’d be well within the boundary to question quarterback Jerrod Heard’s recent passing numbers.

Heard threw for 48 yards against TCU and for only 53 against Oklahoma. And those were on sunny, warm days. The redshirt freshmen threw for 99 yards last week in a messy downpour against Kansas State.

Through seven games, Texas has thrown for 990 yards. The Horns are on pace to have their lowest passing output since 1991.

There’s a decent chance the ground-and-pound approach beats Iowa State this week and Kansas the next. But what happens at West Virginia? Or the final two games against Texas Tech and Baylor?

Strong himself said on Monday that for this team to truly turn the corner, the offense must get better at throwing the football. Those paying close attention will remember this was the supposed knock on Heard last spring and August. He’s a fantastic runner, but struggles with throwing accuracy, according to the whispers.

Judging from Jay Norvell’s recent play-calling, you wonder if the coaches prefer to run the ball as much as possible. Strong clearly doesn’t want to gamble right now. That play-calling against OU was all about staying conservative, eating up clock and limiting mistakes.

The Horns did just that against the Wildcats, too. The passing game didn’t open up until the second half, when it became so obvious that K-State packed the line of scrimmage, Heard had to throw.

Heard completed 3 of 4 “passes” — those short, under-handed flips to Daje Johnson — in the first half. He was 5 for 8 for 57 yards in the third quarter and 2 for 3 in the fourth.

“I think we’ll show improvement in the passing game. I’m not overly concerned about it,” Norvell said. “For us, it’s more about finding ways to win one game at a time and doing what we need to do. We’re less concerned about balancing out our yearly stats at this time.”

Optimists can take comfort knowing that this team’s confidence level is rising. That goes for the players and coaches.

Think about this: How many coaching staffs would be confident enough to put in a new, albeit small, set of plays the morning of a game? Texas did just that last Saturday morning at the hotel. The net result saw Tyrone Swoopes run three times for big yardage late and score from 10 yards out to ice the 23-9 win.

And as long as we’re talking about the quarterbacks, take a bow, Shawn Watson.

When Watson was demoted as the team’s play-caller after the Notre Dame fiasco, Strong insisted things would be fine internally.

Who knows how the coaches — grown men with egos of their own — truly handled the assignment shuffle? Strong, Norvell and defensive coordinator Vance Bedford are the only coaches who speak with reporters. Maybe they’re OK with tight ends coach Jeff Traylor getting more say in the running game, maybe not. These are all professionals, Strong said.

But few can argue with the production totals from Watson’s department.

Heard is a dynamic, potentially game-changing runner. Tyrone Swoopes has found a wonderful niche in the short-yardage “18 Wheeler” package that has energized the junior and given UT a new weapon.

The entire football team is getting better, so by deductive reasoning, the passing game should get better over time, right?

Golden: Texas’ newfound success should be handled with care