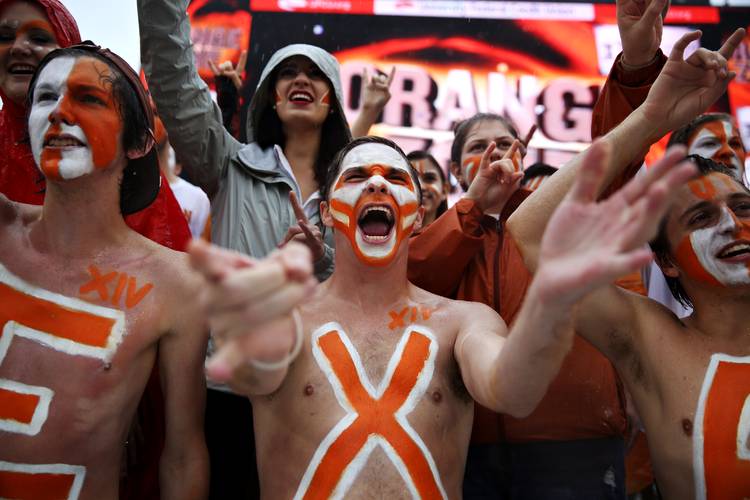 The Hellraisers cheer during the UT game against Kansas State on Saturday, October 24, 2015. Shelby Tauber / AMERICAN-STATESMAN

Most diehard football fans go through the same drill in the days before a season opener.

They print out their team’s schedule, examine it closely, then post it on the refrigerator.  Or for you millennials, save it in a folder on their smart phone.

Sports scribblers like me take it a step further. We print out the sked — that’s journalism slang for schedule — and mark each game as a win or a loss.

Just in case you’re interested, after seven games, I had Texas sitting at 4-3 with wins over Rice (of course),  Cal (gulp), and Oklahoma State (double gulp), and a loss to Oklahoma (insert your ye-of-little-faith line here).

As it stands, the Horns are 3-4, but they are the giddiest 3-4 bunch in the country. That can happen when you have tasted the bile of a 1-4 start and rebounded to taste the sweet nectar of a midseason reawakening.

“We either lay down or we go out fighting,” senior running back Johnathan Gray said. “We talked about what we needed to get done, and now guys are stepping up to the plate.”

The gut punch that was the 1-4 start is now smartly in the rear view, only to be used as a teaching tool. Two wins later, previous unprintable four-letter words that floated down from the stands and onto the message boards have been replaced by more team-friendly terms like “hope,” “wins” and — my favorite — “bowl.”

Who would have thought two games ago, with the specter of Oklahoma looming after the 50-7 beatdown at TCU that made the 38-3 loss to Notre Dame seem like an overtime nailbiter, that Texas would be on a collision course with a .500 record? Remember the locker room feuds on Twitter and the perceived generational gap between the seniors and the freshmen? That stuff went away faster than you can say “two-game winning streak.”

Somehow, Charlie Strong turned it into an us-against-the-wold motivational tool and it worked, thanks to a some good senior leadership and some good fortune between the lines.

“The first six (games), we knew it was going to be a tough schedule,” Strong said. “I told our coaches, ‘They’re going to go as we go. We have to make sure we stay positive, stay upbeat. I know it’s hard. Nobody likes to get their brains beat in, but we still got to keep this team together and still got to keep working.'”

Before Kansas State, Strong reminded his team of its 2-4 record and cautioned the players to not get too full of themselves. The goal hasn’t changed. Strong wants to keep that desperate feeling in the locker room. No time to get comfortable because this group isn’t good enough to win on auto-pilot.

The good news on the Forty is the local tackle football team is coming together at the right time with a schedule that’s falling in its favor as well. After the season, go back to the fridge and check out the printout. You’ll notice the lack of Ls in the middle of the schedule.

This is the time to make a real move toward a bowl game. You won’t face worse teams than the ones you’re facing over the next two weeks. Little wiggle room remains — a loss to Iowa State would be devastating — but the Horns control their own destiny. Two wins would put them at 5-4 entering a tough roadie against West Virginia before closing out with Texas Tech and Baylor.

After the way this season started, Strong will take that scenario all day long and twice on Saturday.

Sports isn’t rocket science, friends.  Winning can make a number of problems disappear. The Longhorns suddenly sound like a team that really expects to take out the competition week in and week out, and that includes conference-leading Baylor, which lost its best player this week. What we have in front of us is a group of players that has gone through the ringer only to answer the challenge and create an improbable opportunity for success over the final stretch.

“All you need is that one spirit,”  Gray said. “We have that now and we don’t want to lose it.”

Eyes on Texas: No reason to worry over the passing numbers just yet

Bohls: Strong was quick to the defense of his offense