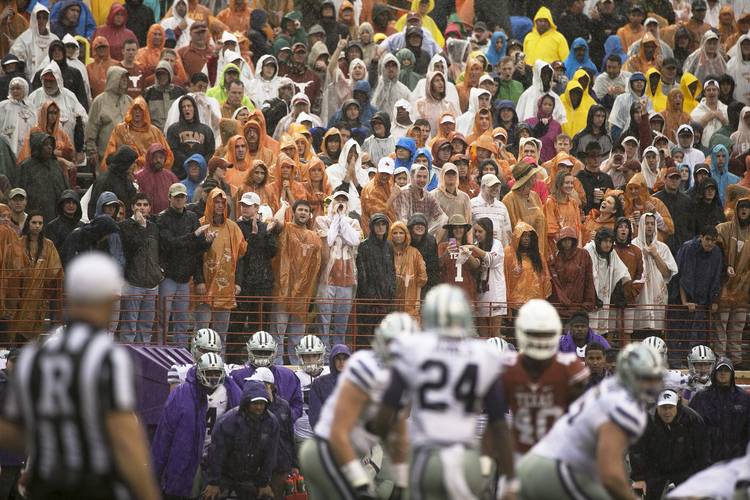 Texas's fans are dressed in rain coats and ponchos as they cheer on their team against Kansas State at Royal Memorial Stadium on Saturday, October 24, 2015. DEBORAH CANNON / AMERICAN-STATESMAN

Not surprisingly after the horrendous performance against Iowa State, the football forecast this week is decidedly gloomy.

And that’s just the outlook for the crowd.

There may be any number of reasons that fans stay away from Royal-Memorial Stadium. Not that they need any extra ones, but a winless Kansas team and the recent memory of a 24-0 shellacking by 2-5 Iowa State alone could combine to produce a half-empty stadium Saturday night.

And college football fans have to decide between going to watch a bad Texas football team play an even worse Kansas team or stay home and watch LSU-Alabama or Clemson-Florida State in two titanic struggles. Or go out to Esther’s Follies. Choices, choices.

The truth of the matter is many fans may not show up because they don’t like the product on the field they’re seeing these days. If that happens, the circumstances could be as devastating as, say, a loss to Iowa State.

And would that mean apathy has set in?

That’s the bottomed-out scenario that no head coach wants and few can survive. Red-hot anger is far better than a strong dose of the I-don’t-care-anymores.

Head coach Charlie Strong is still safe to return next season, the movers, shakers and deciders say, but interim athletic director Mike Perrin is on record as saying, “I don’t like empty seats.” He has likened games to rock concerts and suggested bands are more energized by a full house. Same goes for sports teams. Texas hasn’t released the total number of unsold tickets yet.

Asked if he was worried the fan base may have checked out, Strong said, “I hope they don’t. The team needs them to cheer them on. But it’s human nature. I think the fans will continue to support us.”

Perrin would be wise to put more discounted tickets on the market for the Jayhawks game. Texas is already pushing $25 tickets from the Kansas allotment of 3,850 because the visitors didn’t take their full share. Perrin could add to that total in hopes of drawing more taco-buying, beer-guzzling fans with lesser-priced tickets, but he understands that could tick off the estimated 70,000 season ticket-holders who have paid full price. That number includes students and staff.

Perrin and upper management are discussing the entire ticket structure for next season after deposed athletic director Steve Patterson drastically altered it, raising ticket prices steeply and disallowing the resale of unused tickets at the risk of losing all privileges and their firstborn children.

“But nothing has been decided,” a university spokesman said Monday.

Texas players insist they’re not paying any attention to that facet of the game and won’t be distracted by it. But they might not be fueled by the crowd either.

“I’m not worried,” defensive tackle Hassan Ridgeway said. “One thing I’ve learned is we have a pretty loyal fan base. They came in the rain against K-State. And for the Oklahoma game, we were coming off that TCU loss.”

True, but OU remains a rivalry game, and there’s the State Fair attraction as well. In addition, several thousand tickets were available before the kickoff. And only about 40,000 or so hardcore Longhorns fans showed up in a torrential downpour for the last home game against the Wildcats, but again the team was coming off the biggest win in the Charlie Strong era.

“You know who your real fans are,” defensive tackle Desmond Jackson said. “You can’t really worry about people. The people who actually matter, the ones who come to the games, win, lose or draw, those are the fans I’m proud to have. Not the bandwagon people.”

And if it’s a half-empty stadium?

“If it is, that’s OK,” linebacker Malik Jefferson said. “That’s not my concern. My concern is to play a football game.”

Tight end Caleb Bluiett doesn’t think the fan base has given up on the team.

“I know we have a great fan base,” Bluiett said. “We’ve all gotten a lot of supporting words from our fan base. I want them to know we’ll get this back on track. We can’t take anybody lightly, whether it’s Kansas or Baylor.”

And offensive guard Sedrick Flowers put it in total perspective.

“My dad was a fan of the Houston Texans,” Flowers said, “even when David Carr was there.”

Bohls: Strong was quick to the defense of his offense