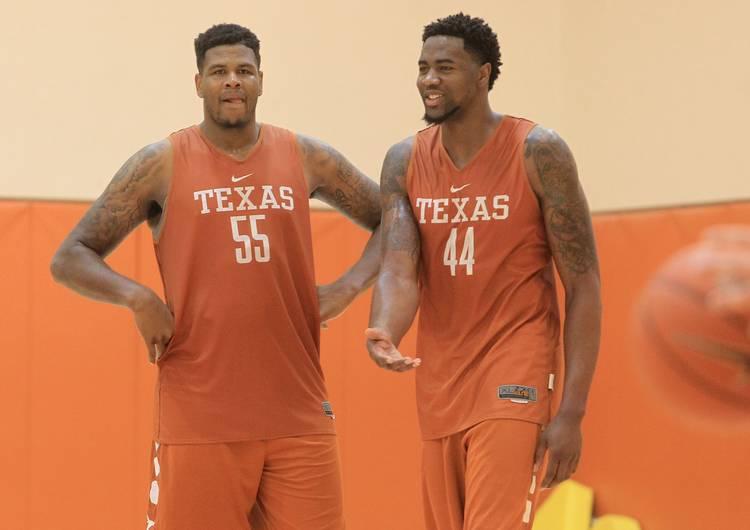 Texas' Cameron Ridley (55) and Prince Ibeh (44) have to be leaders in the middle this season for first-year coach Shaka Smart.(Stephen Spillman / for American Statesman)

Shaka Smart always has a quote of the day. It could be about anything, spoken by anyone. He wants players to focus on the underlying message.

On Wednesday, the quote of the day was about Dennis Rodman, the outrageous, tattooed, part-time U.S. ambassador to North Korea that was once one of the best rebounders in NBA history.

“The quote of the day today was about Dennis Rodman being hungrier for rebounds than anyone else,” Smart said. “There’s a reason why he was the best rebounder. That applies to those guys, in that we need to have that hunger level.”

So much has been made about the Longhorns picking up the pace under Smart. That means there’s a heightened focus on the guards. But what about the big men? Ridley and Ibeh were key reasons why the Horns had excellent interior defense last season.

Can those two, plus a 285-pound Cleare who sat out last season after transferring, get up and down the floor fast enough to keep pace?

UT fans can see for themselves when the Longhorns host Tarleton State in an exhibition game at 5 p.m. Friday at the Erwin Center. Admission is free.

This isn’t a ragtag bunch of Texans driving down from Stephenville. Coach Lonn Reisman’s club was picked to win the Lone Star conference, and three starters return from last year’s 31-4 team. The Texans will start the season ranked second nationally among Division II teams.

Smart isn’t too worried about starting lineups at this point. He even indicated the amount of minutes distributed Friday may not be how it goes one month from now. “That’s really going to be up in the air for some time now,” Smart said.

The coaches want to see Ridley, Ibeh and Cleare running the floor and making what they call “multiple-effort plays.” Can you set a screen, move without the ball, get a rebound, start a run-out and go play defense all within fluid motions?

Ridley served as the trailer on fast-breaks last season. Guards would start the break, and Ridley would occasionally get a follow-up dunk or start the offense at the high post. Ibeh wasn’t much of a runner, at least not on run-outs.

That was the scouting report on Texas. Don’t let the Horns slow it down and lull you into a half-court game. Texas had the fourth-best defense in Division I last season, allowing teams to shoot 36.8 percent. Only Kentucky, North Carolina and Virginia were better.

Texas also finished second nationally in blocks with 265. That would’ve ranked No. 1, but Kentucky went deeper into the NCAA Tournament and finished with 268. If the half-court defense was set, Texas was usually in decent shape.

It’s not like Smart doesn’t know how to use 6-9 or 6-10 players. Larry Sanders was a 6-11 workhorse for Smart at Virginia Commonwealth. Sanders led the team in practically everything. The 6-9 Jamie Skeen had a busy senior season, but he was more like UT’s Connor Lammert, a big man with 3-point range.

Juvonte Reddic, a slender 6-9 player in the 235-pound range, took 363 2-point shots his junior season and 315 more as a senior. Those are pie-in-the-sky numbers for any one of UT’s interior players.

Smart’s really never had big, thick bruisers like he does now. And he’s got three of them. If anything, that’s 15 fouls to use when the Big 12 rasslin’ matches get going in the paint this January.

Texas led the Big 12 in rebounding margin last season at plus-8. It was a total team effort. The Horns didn’t have a single player in the top five on the individual rebounding list. Myles Turner, now rebounding for the Indiana Pacers, was sixth. Departed senior Jon Holmes was eighth.

Rebounding is indeed a mindset. It’s up to Ridley, Ibeh and Cleare to show they can flex some muscle in the middle even though the Horns want to run, run, run.

“I’ve been cautiously optimistic about those guys since we got here,” Smart said. “They certainly have a lot of potential. There’s a lot of good things they can do. They just need to be more consistent. That’s probably the biggest word: Consistency.”

Golden: Why doesn’t Texas know how to win?