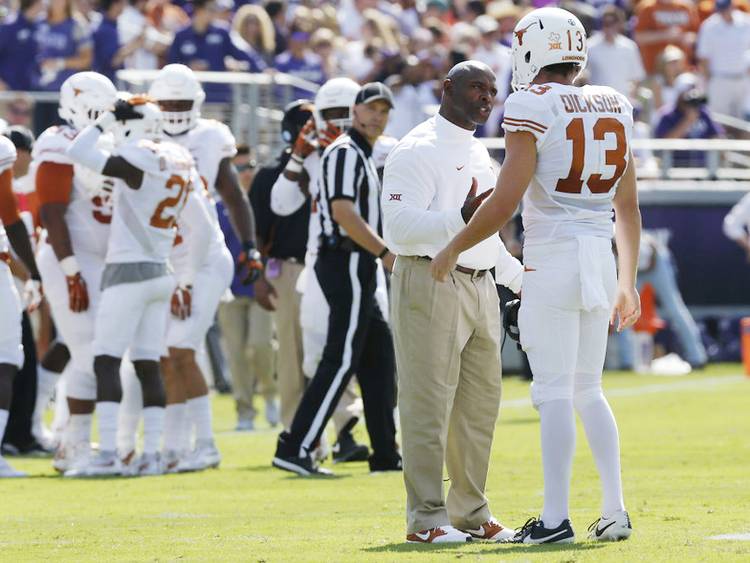 So the Longhorns are 0-11 under Charlie Strong when the other team scores first. Technically, that means if the woeful Kansas Jayhawks stumble into a 3-0 lead on Saturday, the alarmists among us will envision the world as we know it coming to an end, along with Strong’s tenure as head coach.

Seriously, the Horns are good enough to survive an early deficit against an 0-8 team that has lost 34 straight road games — at least I think they are — but do we really want to test this team’s mettle?

“You would like to have said every week that you see that same team that you saw against Oklahoma,” Strong said Monday.”That’s all I ever talk to them about, is will I see that team each and every week? That’s the team you’ve got to see because that team is a team that just played with pride.”

Strong is grasping for answers because this period of losing is pretty new to him. He’s never had to practice this kind of damage of control. He’s blown away that his team shows zero bounce-back when the opponent strikes first. The leaders in the locker room and on the coaching staff, Strong included, have yet to step up to light a sufficient fire under this team’s collective backside when it’s trailing.

I have a simple explanation for the problem. The central figures in this play — Strong and young quarterback Jerrod Heard — were never confronted with such an avalanche of losing. So they have no idea how to deal with tough times.

Strong cut his teeth as an assistant under men like Lou Holtz, Steve Spurrier and Urban Meyer. Those coaches have a combined five national titles and 15 conference championships.

Here’s the money stat: Strong encountered only two losing seasons in 17 seasons working for those men.

Let that marinate for a second.

He was part of losing staffs as the defensive coordinator on Holtz’s 1999 and 2002 South Carolina teams that went 0-11 and 5-7, respectively. The rest has been pretty smooth sailing.

By the time he earned his first head coaching gig at Louisville in 2010, Strong had winning in his DNA. Losing wasn’t even an issue. The winning culture was so ingrained in his head that the two 8-5 finishes at Florida under Ron Zook counted as lean years.

The four years at Louisville that made him Steve Patterson’s choice to replace Mack Brown were merely a product of a winner continuing to win. Under Strong, Louisville put together seasons of 7-6, 7-6, 11-2, and 12-1, plus a 3-1 record in bowl games.

The 37-15 mark validated his reputation as a winner, but this time it was a winning head coach.

Then the storm came.

Quarterback David Ash went down and two handfuls of players were shown the door in Strong’s first year in Austin. The 6-7 finish was fairly passed off as simply a new coaching attempting to change the culture of a program that had gone stale under Brown.

Well the culture has changed in the discipline department, but it has also changed in the win column. Fans used to complain about 10-3 seasons under Mack. Now they’re hoping to make it to six wins and another in-state bowl game.

Before he got here, no one ever bothered to ask at length how he would deal with adversity as a head coach because, aside from those two seasons as an assistant under Dr. Lou, Strong had never been confronted with it.

The same goes for Heard, who came in here as one of the most decorated high school quarterbacks in the country with a pair of Class 4A state championship rings  and the confidence of Steph Curry in a 3-point shooting contest.

The Denton Guyer star has been reduced to a jittery, unsure shell of the quarterback who injected hope back into this program on that one bittersweet evening against Cal when he rang up 527 yards of offense and knocked Vince Young from the UT record book. But defenses have figured out that he has no interest in reading a defense when it feels more natural to use his legs.

Strong and Heard have to find it from somewhere, else the team will go down the drain with them leading the way. They didn’t lose before they got here, but they’re losing now and that’s a culture that will be hard to shake if it festers.

They’re piloting a team that’s not nearly as bad as its Saturday opponent, but is operating with the confidence of a roach at a Raid convention.

As a result, Texas fans are uttering a phrase I never thought I would hear:

We must beat Kansas.

Bohls: Just Texas beats just Kansas, but a win is a win