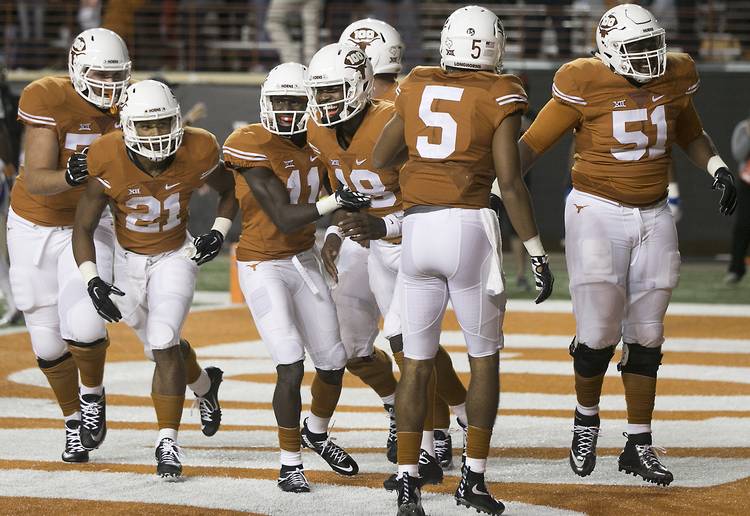 We’re still waiting for Texas to show up on the road.

And no, you can’t count the Oklahoma game because there were plenty of Texas fans in the Cotton Bowl last month.

This discussion is about true road games, the us-against-the-world contests where you get a few small pockets of your fans in the opposing beehive. We’re talking the 38-3 blowout at Notre Dame to start the season. We’re talking the 59-7 Cowtown Beatdown at TCU. And yes, we’re talking the yet-to-be explained 24-0 no-show on Halloween at Iowa State.

Two questions will be answered in Morgantown on Saturday:

1. Will Texas put up a real fight in a true road game?

2. Will a bowl game become a probability at the final gun or a wait-till-next-year proposition?

It’s not known if Strong packed a couple of defibrillators in his luggage just in case the Horns emerge from the locker room as the same group that has befuddled its fans with no-show performance in those true road games.

Here’s what has to absolutely kill this fan base: The 4-5 Horns are basically a clean offense. They have turned the ball over only seven times in their nine games while the defense has 16 takeaways.

That might provide a modicum of hope for a team that has to go into each road game thinking about the blowouts that have happened in previous games away from DKR. The players don’t sound scared, but to a man, none can explain fully why they have showed up time and time again in road games with zero juice.

“Sometimes when you’re on the road, some guys think they’re on vacation,” defensive tackle Desmond Jackson said. “Guys don’t go in with the right mindset.”

I’ve given up trying to figure out why the Longhorns have yet show up with bad intentions in hostile territory. By contrast, the opposition has landed early and often against the Bevos. Texas has been outscored 51-0 in the first quarter of true road games, an ugly number when juxtaposed against the last three games played in the series.

In two of those games, both teams scored more than 40 points, with one game going to overtime.

If we’re keeping score here, it’s been nearly one year since the Horns led a true road opponent in the first quarter. That was at Oklahoma State, where Johnathan Gray’s 6-yard touchdown run gave Texas a 13-0 lead.

Want to take it a step further? Since the last Texas-West Virginia shootout, a 47-40 Texas win in Morgantown in 2013, the Longhorns have topped the 40-point mark only five times in their last 25 games.

So what we have is an emerging battle of running backs — the Texas combo of Gray and D’Onta Foreman versus West Virginia’s Wendell Smallwood and Rushel Shell.

The current UT attack is heavy on the run, light on the pass, and to Strong’s chagrin, lighter on the scoreboard than he would prefer. Nothing in Strong’s demeanor suggests he would want any part of a shootout, but he must get Jerrod Heard engaged early with his arm. We know Heard can run, but it would be naive to think Texas can outrun what is statistically the most prolific running back tandem in the Big 12.

For Texas to keep its bowl hopes in a more realistic realm, the Horns must strike often.

And it wouldn’t hurt to surprise the heck out of all of us by striking first for the first time in, like, forever.

“When someone hits you in the mouth, you have to hit them back,” Gray said. “We haven’t done that on the road.”

Bohls: College athletes’ voices are getting louder. Hear them roar.