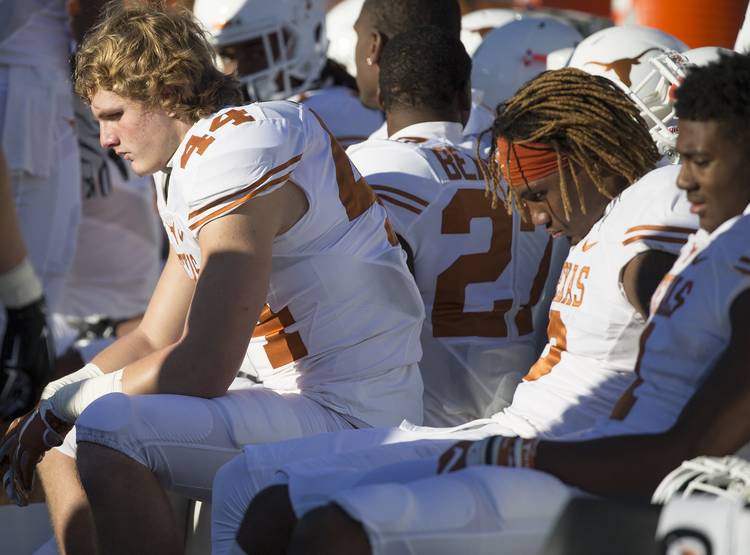 Texas Longhorns players look on as the clock counts down after losing against West Virginia 38-20 on Saturday, Nov. 14, 2015 (RICARDO B. BRAZZIELL / AMERICAN-STATESMAN)

One left jubilantly, needing just one more victory out of its last three games to qualify for a bowl game.

The other left as desperate as it came, drastically needing a do-over.

That won’t happen, however, at least not before 2016. And that Longhorns team cannot bear any resemblance to this year’s version, not if Charlie Strong is interested in long-term survival on his five-year guaranteed contract. If he’s not, I’ve heard wonderful things about Miami’s beaches.

The Longhorns played better on Saturday. They really did. But that’s a relative term because West Virginia (5-4) played much better than Texas’ best effort, combining five inexplicable Texas turnovers and a strong ground game into a convincing 38-20 triumph that puts the Mountaineers within one win of a Liberty Bowl or some such post-season glory.

Texas (4-6) put itself where it’s been this entire year. Hopeless and punchless. Which is why Longhorn Nation has to be asking itself one very fundamental question: Where’s the progress?

There’s been precious little shown this fall, when Texas followed a sensational upset of Oklahoma and a follow-up win over Kansas State with back-to-back losses on the road sandwiched around a perfunctory trashing of league doormat Kansas. And, hey, 51 other FBS teams have four wins or fewer this year, so there’s that.

“In some games we have (shown progress),” Strong said. “In some, we haven’t played well. But we’ve competed, and this was there for us to take it.”

Strong’s record in Austin is a mediocre, and unacceptable, 10-13. Charlie’s said as much himself and knows it’s true. Now there hasn’t been the slightest hint out of this Texas administration that Strong could be relieved of his duties. But this sad-sack season could be costly on the recruiting trail, where Texas struggles to rank higher than the 50s nationally and has commitments from only two Top 50 in-state prospects. Is that any way to run a heretofore college powerhouse?

Of the two dozen or so recruits the Longhorns do attract — none among the top 20 in the state so far — hardly any if at all will be expected to make immediate impacts. That will put a huge onus on these same underclassmen who make up the nucleus of this year’s team.

“It’s very frustrating,” play-caller Jay Norvell said. “We feel we have some capable kids, and we did a lot of things we haven’t done on the road before.”

He’s right. Texas ran the ball at will, finishing with 277 yards on the ground. It responded to adversity by opening the third quarter with one of its best drives of the season that concluded with Daje Johnson’s first touchdown reception of the year. And the Longhorns were within striking distance in the fourth quarter, but fell short. They’re consistently inconsistent.

Now there is a lot of good, young talent at running back, offensive line and in the secondary, some at quarterback and linebacker, and even a little at receiver. But the Longhorns are going to need some killer instinct and distinct playmakers if this operation is to be turned around to avoid what may be three consecutive losing seasons. There will have to be the strongest sense of urgency out of Strong’s bunch from the opening kickoff against Notre Dame next September.

Progress can be measured in different quantifiable ways. And Texas may have the best freshman class in the country. Lord knows Strong isn’t hiding them because they’re easy to find all over the field. Of the starting 22, seven are freshmen and four are sophomores. Five if you count sensational running back D’Onta Foreman, who should be starting but hasn’t.

This is a bad football team that’s ingenious at finding new and creative ways to lose. A missed extra point. A botched punt snap. Total no-shows. And in the 10th game of Texas’ season, penalties galore and turnovers to match from a team that had been plus-9 in turnover margin.

The poor results are reflected in sour, angry players, who had trouble holding down their pent-up anger. Asked if this season is a failure, senior cornerback Duke Thomas just stared at the questioner. The exchange with senior linebacker Peter Jinkens, who has played very well, was almost as terse.

Did West Virginia show any wrinkles you weren’t expecting? “No,” Jinkens answered.

Are you shocked by what’s happening? “Yep,” he replied.

Do you have any explanation for it? “No,” he said before offering, “Is that it?”

I guess it is. Texas has little to play for, unless you believe in miracles and think the Longhorns can run over Texas Tech on Thanksgiving — and they just might — and then knock off high-powered Baylor in Waco.

The entire team is broken emotionally, none moreso than Strong, who has the body language of a gambler wearing a barrel at Vegas. He’s shattered, perplexed, but resolute. He knows he has to be. Asked if he can kiss a bowl goodbye, he said, “We’ve got two games left, so we’ve still got a chance.”

Sadly, with nothing to show for it, Texas showed a modicum of progress on Saturday. It even scored first. The Longhorns continue to resemble one of the nation’s better rushing offenses, and Jerrod Heard had some nice moments as a passer even though he under-threw an open Armanti Foreman for what could have been a touchdown and continues to look to run far too quickly.

Thomas still has some fire.

That’s good because somebody needs to.

Golden: Will Texas finally show up in a true road game?