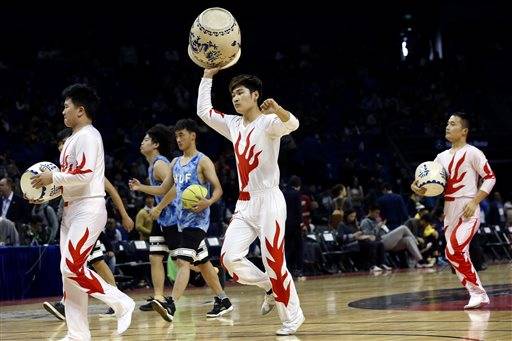 SHANGHAI — For all the cynicism and eye-rolling that goes on whenever university administrators say “It’s all about the kids,” there are times when it truly is all about them, or at least should be.

Both Texas and Washington players had the opportunity of a lifetime last week. They got to spend a week in China on the Pac-12 Conference’s tab. It’s easy for fans to dismiss the whole gambit as a money grab, a way to expand both team’s international brands, and deep down, that’s probably what it was.

But there’s no denying that UT and Washington players had their eyes opened to a completely different world, a place they may never have visited otherwise. Chances are Pittsburgh and Gonzaga players felt the same way about visiting Japan before their game on Friday.

“It’s kind of hard to fathom that we’re on the opposite side of the world from where we’ve lived our whole life,” senior Connor Lammert said.

Years from now, Texas players will remember they lost to Washington at Mercedes-Benz Arena. But they won’t remember many statistical details, like the final score or that Isaiah Taylor had a game-high 29 points. Well, OK, Taylor will. It was only one game in a long season. They will remember the experience, though, and that’s what university administrators always try to get right.

The death-defying traffic, smog, cuisine and overall sense of being a stranger in a strange land is something that’s hard to describe. You have to get out of your comfort zone and see it for yourself.

“It was different,” Taylor said. “I’m not saying I wouldn’t mind playing the game in the States. But getting this experience, coming to China, learning about different culture, seeing a different company like Alibaba … there’s life outside of basketball.”

Ask each player what they liked most about China, and you’ll get vastly different answers.

“Everybody seems like they’re more uniform than we are,” Demarcus Holland said. “The way people dress, we express ourselves more in terms of fashion. But over here, you can see a lot of people dress alike. It just seems like a busy town and everybody’s always working.”

Senior Cam Ridley said, “Biggest challenge was food. We ate whatever they had at the hotel, but we went to Pizza Hut and they had all types. They had calamari on pizza, fish, shrimp. I’m scared to eat just anything out here.”

At least Ridley and his teammates were branching out.

Holland said he had high anxiety about the trip, mainly because of fear of the unknown. How will a bunch of tall 18- to 22-year olds navigate a world without knowing a lick of Chinese?

“Some people can still speak English,” Holland said. “It’s not like you’re in a country where nobody speaks English at all. The people here are very welcoming. They’re happy to have us here, and you can sense they want us here. That’s a good thing to have.”

Chinese basketball officials definitely want to learn from their Western counterparts. That much was evident during that Friday’s panel discussion at Jiao Tong Univeristy. It was jarring to hear one official blast Chinese coaches, saying they are ill-prepared to train a well-rounded athlete.

The Chinese government is sending hundreds of coaches to study abroad over the next two years so they can learn how to be better at their chosen profession. They want to be exposed to different cultures, too.

The Pac-12 has something going in China, although it’s difficult to pinpoint how, where and when the league will see a return on investment. There are 21,000 undergraduate and graduate students at the 12 member institutions. That number should only grow over time.

Sure, the game didn’t go UT’s way. From judging what the players had to say, the overall experience was well worth it. Isn’t that what college is supposed to be all about?

“We haven’t been many places,” Holland said, “but as far as the things I’ve seen, I would recommend people come over and check out the culture and see how they do things.”

Bohls: ‘My All American’ brings back a rush of memories, both good and bittersweet