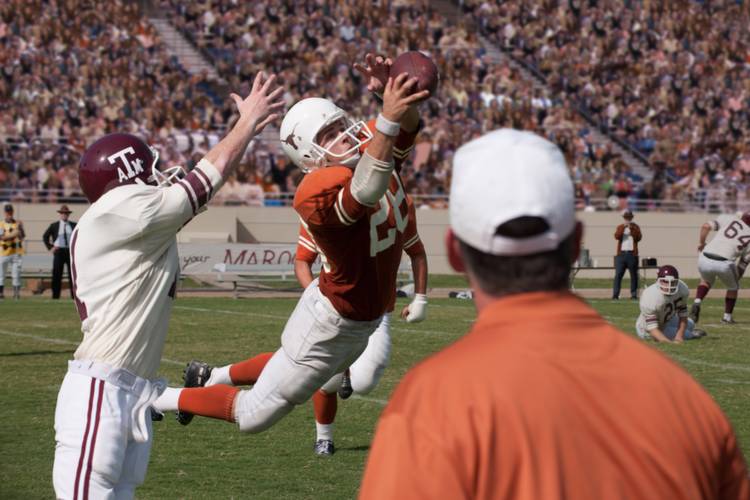 Freddie Steinmark (Finn Wittrock) blocks a pass from a Texas A&M player in "My All American."

Movie critics have panned “My All American,” the sugary retelling of the Freddie Steinmark story that grandfathers all but recite to their grandsons at bedtime in rooms adorned with Longhorn logos. Rotten Tomatoes, the website that tracks reviews for movies, revealed that only 33 percent of critics have given glowing marks to the movie, which is a shame because it could scare some movie-goers away from this wonderful treatment of a subject near and dear to hearts of Longhorns everywhere.

And I see that.

There’s no clear antagonist until the last half hour of the Angelo Pizzo movie, when bone cancer reveals itself in the left leg of the Texas defensive back who literally gave his all for the Longhorns in that climactic 1969 season. That’s the only villain in the film and it’s a particularly evil one.

I’ll admit I’m not the most objective person around when it comes to this movie. I lived it, not nearly to the extent of those featured in the film. I was a UT freshman that year, didn’t miss a home game in that gem of a season that seems so long ago and was so infatuated with the Longhorns that my brother Randy and I were two of the few remnants of fans who stuck around at then-called Memorial Stadium that September day in 1970 when Eddie Phillips unleashed his magic and found Cotton Speyrer over the middle to beat Tommy Prothro’s UCLA Bruins and continue a streak that would eventually hit 30 consecutive wins.

And I realize it’s not the death of JFK on the harsh streets of downtown Dallas or news of the passing of John Lennon at his New York City apartment building on that dark Monday night. But I remember that I was painting the Lutheran Social Services building on 35th Street along with my brother Kent and best friend Joe when we heard the heart-stinging news that Steinmark had been diagnosed with cancer and would never play another football game.

We stood in stunned silence, listening to the news on that transistor radio. And we hurt. We hurt for Freddie.

So I can’t be unbiased when I write of this film unique to Longhorn country. And it’s obvious after interviewing everyone from Pizzo to Juston Street, who was his father personified as No. 16 on the big screen, this movie was special for them, too.

Even for Finn Wittrock, a perfect lookalike as Steinmark, who admits he’d never played football before the two weeks of boot-camp training for the movie. “The story is incredibly resonant,” Wittrock said. “And the story isn’t dead. We’re not talking about ancient history. It’s a living history. I kept thinking, I’d better not mess it up.”

He didn’t. So what if this is a Disney movie in shoulder pads? I’m just fine with that.

As co-producer Paul Schiff told me, “There isn’t a shred of cynicism in the movie. I think it’s a movie that will endure.”

So do I. Meaning it’s a movie I’ll watch over and over, just like “Hoosiers,” my favorite sports movie of all time with its gripping storyline, its vibrant scenery like the bus rides through snowy Indiana roads and its memorable lines. “I’ll make it,” Jimmy says.

And Pizzo made this one with the tender care of a masterful storyteller who kept the story an authentic one. Sure, maybe Freddie wasn’t quite the Boy Scout he’s portrayed, and he had some dark times after his left leg had been amputated as anyone would. But Pizzo, who wrote and directed this movie, wanted it to be genuine and needed to because he was dealing with living, breathing figures.

“James would be extremely proud,” James Street’s wife, Janie, said. “They did the story justice.”

Maybe Aaron Eckhardt doesn’t make me see Darrell Royal if I shut my eyes. Maybe Bill Bradley didn’t take the news he was being replaced at quarterback quite as comically as the movie intended (although that was a funny scene). Perhaps Frank Medina wasn’t portrayed as harshly as he was in real life. And maybe Steve Worster’s character should have dark hair and look a little more swarthy.

But the football action was entirely believable, even though Juston told me he’d never thrown a football before while wearing shoulder pads. I hear James Street when his son says his lines. I’m in that stadium again when Texas whips one opponent after another. And Sarah Bolger, who plays Freddie’s girlfriend Linda, is a little over the top as the adoring girlfriend, but the actress told me that Linda couldn’t have been more gracious, chatting with her over the phone and even sending her photo copies of her diary from that time.

However, it was all real to me, and the memories of the ’60s kept flooding back to me as I sat in the dark theater (with two dear Aggie friends, by the way). I loved it. I dare you not to cry, particularly during the emotional hospital scenes or the uplifting conclusion at the Cotton Bowl.

We loved Freddie. And do to this day if you’re a true Longhorn. But you don’t have to be to enjoy this movie. Maybe it’s not a great work of art but, as Huston Street, Juston’s brother, told me, “He had that subtle James Street-ness. He became my dad. I think Juston nailed it, and I think it will become iconic.”

When I quizzed Pizzo on the red carpet before the Austin premiere a week ago, I couldn’t help but ask if he’d picked out another heart-tugging sports film to bring to the big screen. He shrugged, waved his hand and said, “I’m done with sports.”

I’m not. And neither will you after you’ve invested two hours in this true-to-life story.

Bohls: Smart is making his connections, ready to take flight