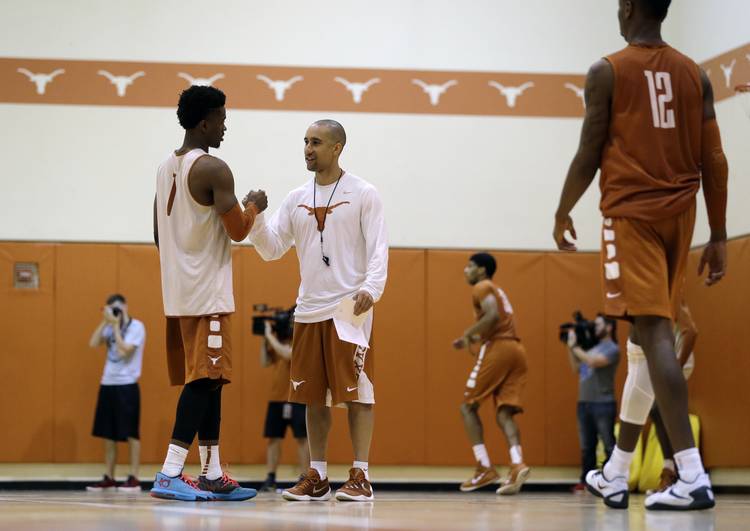 Shaka Smart, given his druthers, probably wouldn’t have planned to have been out of the country for almost two weeks of the early season. By the time the calendar hits December, the new Longhorns basketball coach will have spent 13 days on airplanes, in hotels and at foreign arenas.

That said, he’s looking on the bright side, however dark it might be.

“We’re only two games in,” Smart said Monday. “In knowing what the team will do when the lights are on, we are, relationship-wise, ahead of knowing where we are from a game standpoint. We took a small but significant step, but we have a long way to go. We’re getting to know how we best function together.”

The coaches and players are figuring each other out. How hard the staff is going to push them. Which players practice as they play. Which assistant’s the good cop? How many players need a pat on the back and how many need a pat further south. Who’s going to pout? All these are integral questions that must be answered.

These trips may cost the team some physically, but might enhance it mentally.

The players lost a ton of classroom time (though just one day for The Bahamas tournament). They weren’t in their own environment. Even the Big Macs and Cokes didn’t taste the same over there in China, Smart said. The tedious, 15-hour and 12 1/2-hour flights necessitated a lot of recovery time as the staff and players try to restart their internal clocks.

Oh, and they lost the game, a dreary 77-71 loss to a Washington team that started four freshmen and is picked to finish next to last in the Pac-12.

Asked if the China trip represented more of a downside than upside, Smart chuckled and said, “That’s a loaded question. The loss was a negative, I’ll give you that much.”

Except for point guard Isaiah Taylor, the Longhorns didn’t look any better in Shanghai than they did in Pittsburgh the last time we saw them in their blink-and-you-missed-it NCAA Tournament appearance against Butler.

But there was time for team-bonding, a huge component of Smart’s Virginia Commonwealth days when he made that program a household name. There’s no substitute for that, and Smart pushes that in a big way, whether it’s one-on-ones with the players or rigorous Navy Seal training in Lady Bird Lake.

Smart made the most of his time on the China trip. He didn’t watch a single movie on the flight back and recalled that Jason Kidd once told him a coach had watched a movie on a long plane ride instead of spending time and building camaraderie with his team, a nuance that wasn’t lost on Smart. Not much is.

Smart said he watched the Washington game tape six times. He wrote in his journal, which is fascinating on its own. “And I took a lot of notes,” he said.

Even though his passport for foreign travel is up to date, his team still needs some work. Of course, Smart knows that.

Smart knows he has no ready-made playoff team. He does have mounds of experienced players, none of whom has won big. He knows he has to get through to them, make a deep, abiding connection that will make them buy in for him. Relationships are everything, and Barnes’ connections to his best players like Taylor and Jon Holmes deteriorated. Barnes lost that trust. Smart is building his.

There’s a lot on Smart’s plate these days. He doesn’t have to win right away, but he’s got enough talent that he can, both inside and outside. But he’s got to find some shot-makers, Texas’ annual deficiency.

His staff grades the “shot quality” of every field-goal attempt and scores them in a range of great, good, decent and bad. Few graded high in China when the Longhorns clanked 54 of their 73 shots and 13 of their 15 tries from behind the line.

Smart’s pushing conditioning and running and attacking, factors in the team’s 25-8 advantage in fast-break points in Texas’ 67-56 win over Texas A&M-Corpus Christi in Saturday’s home opener. Texas wants big-time performance out of its bigs, particularly senior Cam Ridley, who posted his 14th career double-double and looks invigorated with this new brand of Longhorn basketball.

But mostly, Smart’s preaching togetherness and unity. They’re the glue that keeps teams upright in good times and bad and keeps them from fracturing when adversity strikes, as it almost inevitable will in a Big 12 where three teams rank among the top seven nationally.

“We need to be tougher-minded,” Smart said. “A team that is more connected. I don’t think our guys realize how much they need each other, when those five guys have to be so utterly connected.”

The connection will come. And not just between flights.

Bohls: ‘My All American’ brings back a rush of memories, both good and bittersweet