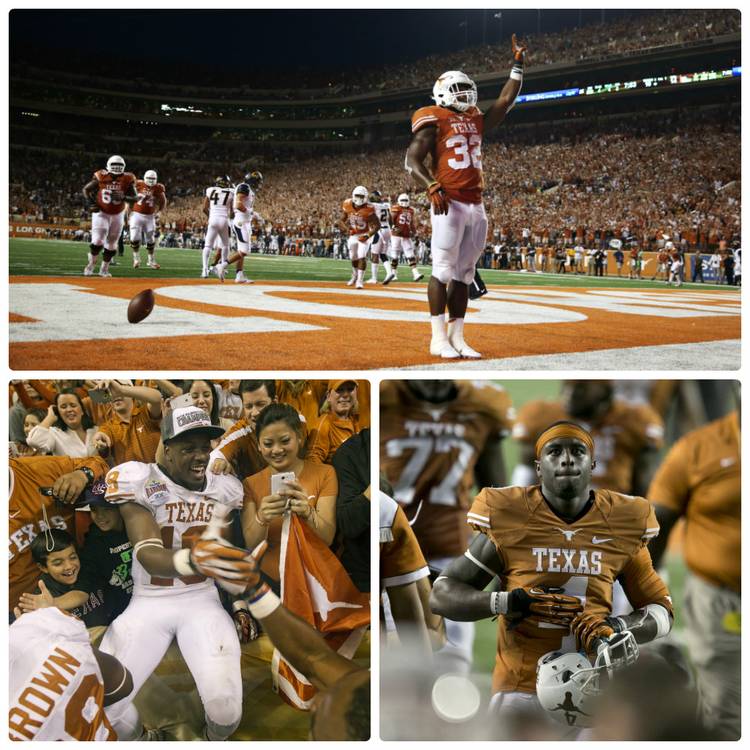 To a man, the seniors on this Texas football team recited the same litany of memories.

The monumental dreams they had as youngsters. The high expectations they had during the height of recruiting. Their first time to suit up in a Longhorn uniform. Their first action on the field. The highlights.

Lots and lots of adversity.

As wide receiver Marcus Johnson said this week, “A few of us were talking about it a couple of days ago. It’s been a blessing really, all the things we’ve been through, but I have another opportunity to go play a game I love. It’s been up and down, and a lot of adversity, but that’s shaped me into the person I am today. It taught me a lot. I’ve had to learn how to overcome, and I wouldn’t want it any other way.”

Well, some things, anyway. There have been way too many humbling experiences on the field this year.

When the 22 true and redshirt seniors take the field at Royal-Memorial Stadium on Thursday night for the final time — five of them as starters — they’ll do so with a tangible sense of deep pride and strong emotion, but also with the piercing knowledge that they didn’t come close to accomplishing what they set out to do.

They won’t leave with any championship rings. They endured a major head coaching change. They didn’t win a Big 12 title or even come close to a national championship. They never played in a major bowl. In fact, that incoming recruiting class of 2012 won only one bowl game, an Alamo Bowl triumph over unheralded Oregon State, lost two others and probably won’t even get a post-season bowl watch or video player this Christmas.

They barely even registered a winning record.

Their 27-22 record pales against most seniors who pass through Texas, and Thursday’s game looks like a 42-38 win over Texas Tech, but these are unusual times. As Charlie Strong desperately tries to resurrect a program that sits at 4-6 and almost certainly will suffer back-to-back losing seasons unless they can knock off the high-scoring Red Raiders and powerful Baylor next week in Waco and find their way to a win in a bowl game, the seniors leave with a better track record off the field than on.

Four seniors have already graduated, six more will next month, and all 22 are on pace to graduate no later than next summer. Strong thought enough of them that he let eight of the walk-on seniors take part in the final kickoff coverage against Kansas.
You may not have heard of Dillon Boldt, Dominic Cruciani, Gaston Davis, Hunter DeGroot, Trey Gonzales, Tyler Lee, Tyler Marriott or Logan Mills, but they sweat and sacrifice just as much as the scholarship seniors. And Boldt, Cruciani, Davis and Gonzales practically lived at the Dell Children’s Hospital on Fridays before home games, lifting up the spirit of suffering youngsters.
Perhaps more than anything else, these seniors can be credited with helping change the culture of embedded entitlement that even Mack Brown conceded had infiltrated the program. The country club is closed, hopefully for good, and Strong can thank players like Duke Thomas and Peter Jinkens and Johnathan Gray for that.

Such would be a meaningful, relevant transformation if it sticks in the future. It wasn’t so long ago that Strong dismissed 10 players from the program for a variety of transgressions, moves that decimated Texas’ depth to the point that only 14 fourth-year seniors remain from a class of 28 signed in 2012.

Two in the original class were five-star recruits. Defensive tackle Malcom Brown left after his junior year, a first-round pick of the Patriots. Johnathan Gray is just 58 yards shy of 10th place for the most rushing yards in school history.

Fifteen warranted four stars, although six of them, like quarterback Connor Brewer and wide receiver Cayleb Jones, left in search of greener pastures.

Most of the seniors say they still keep tabs on former teammates like running back Jalen Overstreet and offensive lineman Curtis Riser, both of whom are playing for Sam Houston State, and running back Joe Bergeron, who one Longhorn said was trying to play football overseas. Since then, Strong hasn’t had to kick a single player off the team, and other than a shoplifting charge in late summer, the Longhorns have minded their Ps and Qs.

“I’m glad I’m not one of those who’s not here,” senior wideout Daje Johnson said. “I  still keep up with them to see how they’re doing. I can tell they miss it. Who? Pretty much everybody who left here. After I get off the phone, I think I’m glad I’m not on the other end.”

Now Johnson is at the end, and he’s glad he’s reached this point. That wasn’t always a guarantee. He has survived a glut of injuries and self-induced suspensions for selfish behavior and hasn’t barely scratched the surface of his potential.

Johnson, arguably the most explosive player on the roster unless it’s injured sophomore running back D’Onta Foreman, who will sit out this game, has scored just a single touchdown this season, that coming in Week 10.

“I’ve had a lot of stuff to overcome, but I pushed through and learned through my mistakes,” he said. “I always had a feeling I’d survive. I always had a dream I’d never quit or give up on myself, and Coach Strong has continued to make me drive.”

While none of these seniors made All-Big 12 or All-American, some like Jinkens and Thomas have had strong seasons. Jinkens in particular excelled and would be the senior MVP of this Texas team.

“We may have a smaller senior class,” Jinkens said, “But a lot of us stuck through it.”

And most of them see the big picture.

“I tell you what, when we were all getting recruited, we all thought we’re going to change things,” H-back Alex De La Torre said. “We’ve had a lot of ups and downs, but I wouldn’t take it back. We all learned how to deal with adversity. If a bad season is the worst thing in your life, you’re doing pretty good because there’s a lot of crappy stuff in the world.”

De La Torre gets it. He has an appreciation for all he’s gone through, the wins and the losses, the sacrifices and the relationships. And sees a better future for Texas.

“You look at the freshman class, and they’ve got the talent,” he said. “The mindset we’ve all adopted. Bring in a few more guys, and they’re going to get this thing rolling.”

Bohls: Texas, Warren are in rush to put the past behind