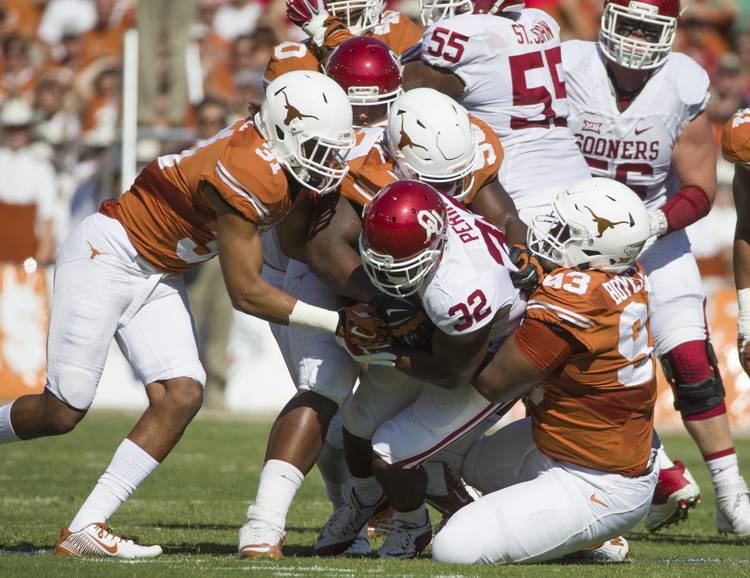 Texas is assured of a losing record for the second consecutive year, but it still knows it was good enough to beat Oklahoma.

How, we don’t exactly know. At this point, not even the Longhorns are sure how they did it even though it came out of the blue and stunned the college football world.

Talk about your paradoxes.

But that’s why they’re called flashes. Here one minute, gone the next. Texas has had moments,  like Jerrod Heard’s breakout game against Cal. And long-distance runs from D’Onta Foreman and new sensation Chris Warren III. And Peter Jinkens’ terrific season.

That said, Texas didn’t sustain anything after OU. Beyond 60 well-played minutes of inspired football against the then-10th ranked Sooners, the Longhorns failed to sustain any level of excellence in a single other game. Charlie Strong has been mystified as the rest of us.

“We play like that against Oklahoma,” Strong said, shaking his head, “and then go lay an egg at Iowa State.”

Strong’s never dodged the criticism, never made excuses. He’s never thrown his players under the bus or any other mode of transportation and may not get this thing turned around. No one knows. Not even Charlie, who has seen his team go 2-3 since OU.

But the 4-7 Longhorns still have something to play for in Saturday’s finale against Baylor, and yes, it’s a broken record to keep saying this about a broken team.

Pride, for starters. (That factor has to kick in eventually, right?)

Momentum, for next season. (Next year can’t be worse, can it?)

Last impressions on impressionable recruits. (“We have until February to chase kids down,” Strong said.)

The remotest of remote chances of a bowl game.

Texas first must knock off 21-point favorite Baylor, which brings to mind a bold prediction from Longhorns quarterback James Brown. When told third-ranked Nebraska was a three-touchdown favorite to beat Texas in the inaugural Big 12 title game in 1996, Brown, the ultimate gamer, said that “maybe we’ll beat them by three touchdowns.”

By nightfall, that had become a guarantee. Then, Texas rolled left. And left the Cornhuskers out of the chase for a national championship.

No players were so bold on Monday.

With the lack of bowl-eligible spots for a few remaining slots on a landscape glutted with 80 bowl teams, Texas could stand a very slight chance of drawing a bowl bid with a win over Baylor and a 5-7 record although other candidates have higher APR numbers that could leave the Horns out.

Would Texas even be interested? “I imagine we would,” Strong said after Monday’s press conference.

And why shouldn’t he, even though some want to immediately declare the season dead and gone and think Strong should devote his full focus on hiring new offensive assistants and landing blue-chippers that could help immediately?

Because it represents a shred of positivity in the darkest of seasons and makes Texas seem marginally relevant, even if it isn’t. Without a bowl berth, it would join 48 other FBS teams that don’t play in the post-season. No one wants to be in the Bowl-less 48.

Now Baylor is likely to make all this foolish talk irrelevant Saturday. The Bears are eager to make amends after losing two of their last three to OU and TCU and falling out of the CFP conversation.

Texas’ upset victory over 16-point favorite OU will remain one of the biggest mysteries of life, right up there with Stonehenge and the Loch Ness monster and crop circles and the Kardashians. Some things just can’t be explained.

Has there been a bigger paradox than a possibly 4-8 football team that lost by 18 points or more to four opponents, yet also whipped up on a Sooners team that is a lock for one of the four College Football Playoff spots?

Doesn’t really matter. Strong would love to be able to tout upsets of OU and Baylor in the living rooms of blue-chippers and be able to change the conversation if it turned to Iowa State and Texas’ passing game.

So does Strong expect other CFP teams like Alabama and Clemson will be ringing him up for advice on how to beat Bob Stoops’ team?

“I don’t know why,” he harrumphed Monday.

We don’t either. Charlie gets it.

“We played so well against Oklahoma,” he said. “I thought we’re going to hit a stretch. It’s a game that will set us up. But we never took off.”

Instead they took Saturdays off, losing to the likes of Iowa State and West Virginia. Of course, they lost to good teams, too, like fringe CFP teams Notre Dame and TCU. OU remains a mystery.

“All season we’ve been saying we’re close, but I think the effort’s there, the will’s there,” senior center Taylor Doyle said. “OU, they’re a great team. And a rivalry game, it doesn’t matter what your record is or what you’ve done prior.”

It has mattered what Strong has done post-OU, however.

Bohls: Texas, Warren are in rush to put the past behind