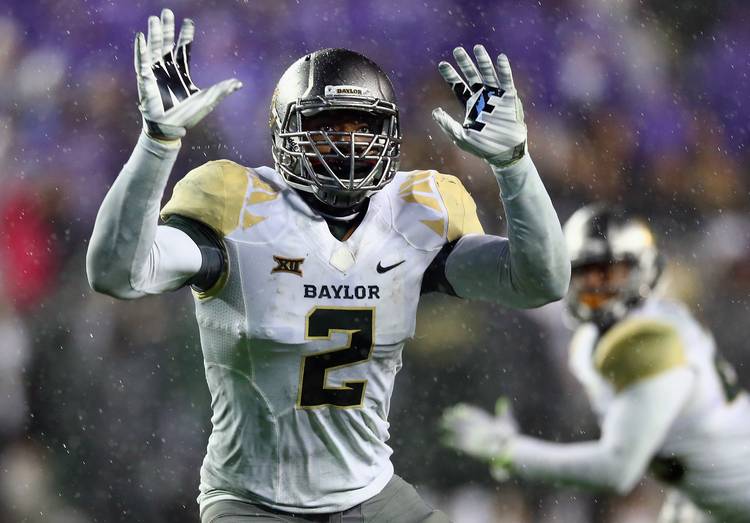 Shawn Oakman #2 of the Baylor Bears during the second half at Amon G. Carter Stadium on November 27, 2015 in Fort Worth, Texas. (Photo by Ronald Martinez/Getty Images)

WACO — Their two-year reign atop the Big 12 is over.

That mudder of a loss in Fort Worth cut them deep.

Now the Baylor Bears are looking for the perfect foil on which to unleash this rare spell of frustration. Enter the punch-drunk Texas Longhorns.

Ah, those brutal Bevos, they of the unrelenting bad luck and head-scratching road no-shows that have plunged Charlie Strong into cut-and-paste mode when asked the same questions about his team’s shortcomings week in and week out.

Baylor’s Art Briles has arrived at the spot where Strong hopes to be in a year or two, where disappointment comes from a 9-2 record.

While 4-7 Texas laments a second straight losing season and the subsequent negative fallout that happens in the areas of fan interest (long since faded), recruiting (plummeting by the second), and national perception (don’t ask), the Bears are angry to be finishing at best tied for second place in the conference.

Briles spoke on Monday about the devastation in his locker room in the days after the Bears were effectively eliminated from conference and national title contention in a rain forest disguised as TCU’s Amon G. Carter Stadium.

“They were all frustrated and disappointed, but alive,” Briles said. “That’s the main thing. If you’re alive, then you can have hope. You can have goals and can have purpose. So that’s where we are.”

The loss could relegate the Bears to a possible Sugar Bowl appearance with a win over Texas. Yeah, I know. First-world problems in Waco. The sheer torture of a week at a major bowl game in a great town for a program coming off the first consecutive Big 12 titles in school history? That has to grate at the guts of everyone in Austin, where it’s been six years since the local team hoisted a Big 12 trophy.

Sure, Briles is working with his third quarterback off the assembly line, and redshirt sophomore Chris Johnson had his issues against the TCU defense and Mother Nature. Still, the Bears are now recognized as a national contender, despite any issues that existed with guys like Seth Russell and Jarrett Stidham not returning to action from the infirmary.

Despite the injuries, the Bears are the new money in college football and are poised to contend for Big 12 titles for years to come. That’s evidenced in the expectations dripping from the ceilings on campus. It’s only been five years since Texas completed a 16-2 run in the series. Now Baylor, a 21-point favorite Saturday, stands ready to make it three straight over the Longhorns, and four in the last five.

It would be an understatement to say these are two teams heading in opposite directions. The numbers don’t lie. UT fans can expect their team to treat Saturday like a bowl game, but should do so at their own peril. I made the mistake of thinking the Horns would treat Iowa State as a bowl game after wins over Oklahoma and Kansas State brought them to within one win of reaching the .500 mark, and we all know how that turned out.

Even so, the Bears believe Texas will come in desperate with nothing to lose.

“We played them last year in a similar situation and they threw everything at us,” Baylor tackle Spencer Drango said. “I expect the same this time.”

The next true road game where Texas does something remarkable will be the first since back-to-back road wins in Lubbock and Stillwater in November 2014. Baylor is 10-1 in swanky new McLane Stadium and would like nothing more than to jettison Texas into the offseason with yet another blowout. Don’t put it past ol’ Art to try and roll up 50-plus points on the wounded Longhorns in their first visit.

“We can have a tremendously fulfilling season taking care of the business at hand,” Briles said.

His Bears have plenty of motivation and enough anger to make a horrible Texas season even worse. They’re about to give Texas a hard time en route to the Big Easy.

Golden, on Perrin: Some to-do’s for the new AD’s Longhorns legacy