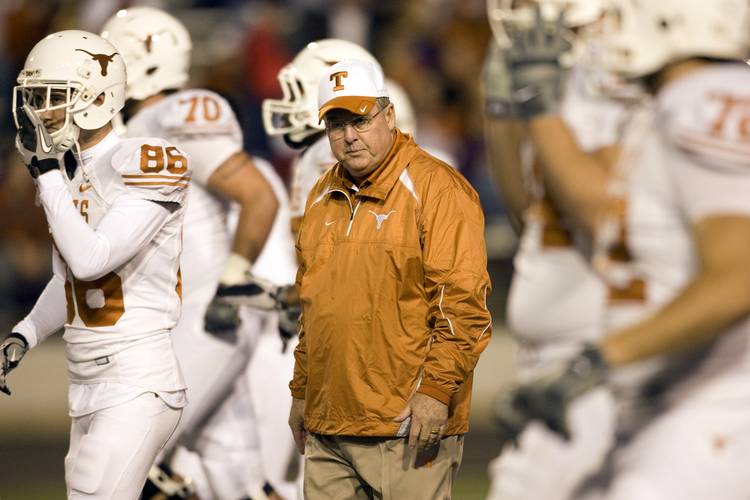 Not a whole lot has changed for Greg Davis in the last five years.

He’s around a big-time college football program that’s competing for a national championship.

He’s developed an unsung quarterback into one of the best in his conference.

Oh, but the wardrobe has changed.

Texas’ former offensive coordinator has invested in a heavy dress coat and a warm down jacket to combat the cold climes in the upper Midwest. Davis got his first taste of snow this winter a couple of weeks ago.

“But I haven’t bought as many pair of shorts,” Davis said this week, “so I’m saving money there.”

Clothes don’t always make the man, but Iowa’s offensive coordinator has helped make the Hawkeyes not only nationally relevant again but into an unbeaten team that’s one step away from qualifying for a College Football Playoff berth.

“I’m one piece of a big puzzle,” Davis said.

Funny how things work out.

Texas fans couldn’t get rid of Davis quickly enough after the 5-7 season of 2010 that was the beginning of the end for Mack Brown’s tenure, and the head coach was in need of a scapegoat. Davis took his medicine with dignity and grace and has more than landed on his feet as play-caller for a 12-0 Iowa team that faces one-loss Michigan State in Saturday’s Big Ten championship game.

He’s one of the best offensive coordinators Texas has ever had, and he’s proving himself yet again by directing an offense that’s so balanced the Hawkeyes have run for 2,444 yards and passed for 2,407 yards. As usual, he defers to his boss and commends head coach Kirk Ferentz for some offseason decisions that have paid big dividends.

For starters, he and Davis picked 6-2 junior C.J. Beathard over incumbent Jake Rudock at quarterback. Rudock left to become the starter at Michigan while Beathard has been remarkably consistent, if not flashy, in keeping the Hawkeyes on track. Davis loves Beathard’s ability to get off accurate throws when the pocket isn’t clean. He ranks only ninth in the Big Ten in passing yards, but fourth in efficiency.

Secondly, Ferentz devoted the offseason to team-bonding and handed out copies of a leadership book called “The Slight Edge: Secret to a Successful Life,” a work that trumpets goal-setting. Each of the 12 players on Iowa’s leadership committee took a chapter and gave a book report.

“It’s about what separates the pretty good from real good,” Davis said. “One chapter that stuck out in my mind was ‘Mastering the Mundane,’ the day-to-day grind. It really hit home with the team. The kids really bought into it.”

Both moves worked to perfection.

Beathard has limited turnovers to a school-record three interceptions and has been solid in the fourth quarter, when he has completed 31 of 47 passes for 436 yards and three touchdowns. The team has rallied around one another so that the Hawkeyes have won with strong running (seven games of 200 yards or more), stingy defense (25 takeaways for a turnover margin of plus-14) and great kicking (game-winning, 57-yard field goal by Marshall Koehn). Their biggest victory, a 30-point road win over 10-2 Northwestern, came despite injuries to the starting tailback, left tackle, right tackle and X-receiver, none of whom made the trip.

“My knee-jerk reaction would be nationally no, we don’t,” Davis said. “We’re kind of a lunch-bucket group that’s hard-nosed and physical. (Northwestern’s) Pat Fitzgerald said we play football the way football’s meant to be played. I don’t think it’s any secret we’re not one of the brand schools. We’re not Ohio State. We’re not Michigan, but I think we’re a pretty solid football team.”

“Yes and no,” Davis said. “This group doesn’t have the same talent of the team we took to the Rose Bowl. It’s not that we don’t have good players. We have a bunch of good players. We have no four-star or five-star players on the team. Not any. That speaks to the development and Kirk’s way of bringing players along.”

So does Beathard remind Davis of Vince Young?

Not exactly, because Davis never calls a designed run for Beathard outside of an occasional quarterback draw. But he loves the same leadership qualities Beathard has.

“We couldn’t see C.J.’s leadership as long as he was No. 2,” Davis said. “When he was No. 1, all the intangible things you drill into guys start to show up. He has the ability to make things happen with his feet, and he gets the ball out quicker. I think C.J. will be a pro quarterback, but I’m not sure Jake won’t be too. I compare C.J. more to Colt (McCoy). He’s really bright, has a really quick arm and can run.”

A struggling 4-7 Texas team could use a young up-and-comer offensive coordinator like, uh, the 64-year-old Davis, but Davis would have none of it.

Either physically or emotionally. Davis was miffed that his hotel television in Lincoln, Neb., didn’t carry the Texas Tech-Texas game on Thanksgiving night, but he does watch the Longhorns occasionally. So does he think Texas fans miss him yet?

Bohls: For Charlie Strong, eight is enough in 2016 … maybe