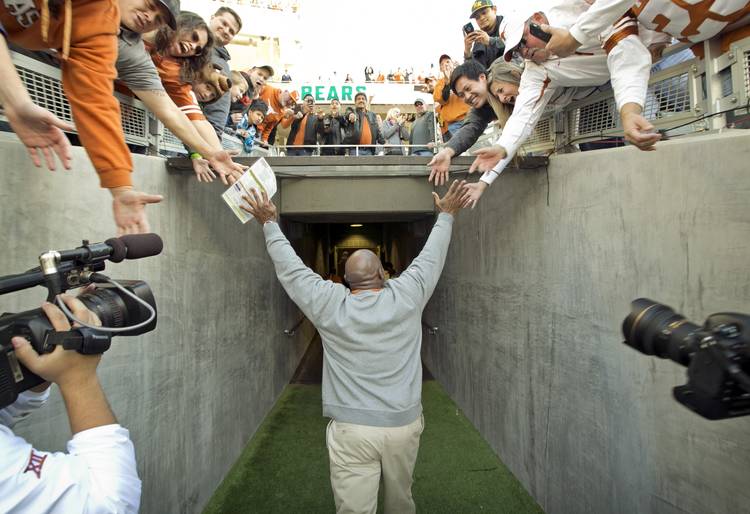 WACO — When his Texas football team reported for fall practice in August, my first question to Charlie Strong was this:

Is it possible your team could be worse this season than it was last year, when it went 6-7?

Strong turned his head sideways and, somewhat flustered, said, “Wow. I don’t know about that.”

We already know the answer to next year’s initial query. The Longhorns have to be better in 2016.

Better than its spotty, pass-challenged offense with two inconsistent quarterbacks and a so-so offensive line but great running backs. Better than a susceptible defense that desperately needs more big uglies up front but has talented youngsters in the secondary. And much better than the 5-7 edition this season that in keeping with its erratic performances topped off a topsy-turvy year with Saturday’s stunning 23-17 upset of 12th-ranked Baylor on the road.

Texas has to be better. Or Charlie had better pack.

It’d be wrong to label this a roller coaster season for the Longhorns because even those carnival ride passengers are on top more often than Strong has been in his 11-14 tenure.

“I don’t want to make any promises,” Strong told the media afterward. “But we have a lot to look forward to.”

Perhaps, but can I get a show of hands for anyone thinking Texas will be a preseason Big 12 contender?

But the Longhorns certainly looked like one Saturday, knocking Baylor out of the Sugar Bowl. Texas can claim wins over arguably the best two teams in the league when the Bears and Sooners are at full strength.

Sure, the Bears started their third-string quarterback and were forced to go with their fourth-stringer — Lynx Hawthorne, a name out of a Shakespearian play — who had been a wide receiver and punt returner all year.

But do you think Strong needs to feel sorry for someone else when his own team was without seven true starters and lost chances at wins this year with a hooked extra point and a muffed snap on a punt? It’s not likely that Art Briles gets a Hallmark sympathy card from Strong any time soon.

You win in college football — maybe any level of football — with a great quarterback and a great head coach. Texas doesn’t have close to either, at the moment. But that could change.

Strong needs to change his staff with a shakeup that should include a new offensive coordinator and probably new line and running back coaches, and put the fear of God into failing defensive boss Vance Bedford. And Strong needs to make sure the new play-caller has a quality quarterback to execute his system, whether it’s Tyrone Swoopes, Jerrod Heard, blue-chipper Shane Buechele enrolling in January or a junior-college or Division I graduate transfer.

“We’re very close,” senior wideout Daje Johnson said. “It’s like we’re right at the edge of being great. The players in the future are going to make that happen.”

I still think Strong can transform Texas back into the power it once was under Mack Brown, but he must show more positive signs than he has in his first two seasons. Otherwise, new athletic director Mike Perrin should forgo the search committee and begin doing earnest research now on possible successors like Tom Herman, Larry Fedora and maybe even Les Miles.

This win was encouraging and represented progress, but only a fool followed this entire burnt orange season and expects a Big 12 championship this time next year, even if Strong said, “We’re close. We’re getting there.”

They’re close-r. That’s all. But if you’re not one of 48 FBS teams that don’t go to a bowl game when 80 do and claim you’re on the precipice of greatness, that’s not logical. The entire narrative changes, starting Sunday. Strong is officially on the clock to turn this program around and desperately needs a minimum of eight wins to begin that process.

Strong and his staff still make too many bad decisions, whether it’s the misguided deep route to Daje Johnson on fourth-and-7 against Texas Tech or the rampant conservatism the Longhorns showed in the second half Saturday, when the head coach and Norvell should have been rolling the dice with so little at stake. That tells me something when Charlie had nothing to lose.

Were they too conservative?

“Probably,” said Norvell, who called two ill-fated, run-of-the-mill Swoopes runs on a pair of third-and-5s that led to a field goal and a punt in the second half. “We were trying to play the best cards we had.”

Translation: He doesn’t have a quarterback he can trust yet. Asked if Texas is settled at the position, Norvell said, “I can’t say that right now. We’re not happy with the way we throw the ball. We’re just not. I don’t think you can be ultra-conservative and win big in this conference. Five of the top 10 teams in scoring are in this league, and to compete, you have to be dynamic and push the ball downfield.”

Norvell also called Texas a team with “a level of immaturity that has to change to be the program it can be. We’ve scratched the surface, but not what it needs to be.”

Redshirting only six of 23 freshmen in last year’s top 10 recruiting class will do that. And Strong needs another big class to move the needle. Not to mention the first-down chains.

So Texas finishes the year with a second monumental upset and nowhere to go. It has some lingering issues. Lots of them, actually, with very few clear answers but one obvious ultimatum: Win eight, Charlie.

Bohls: Greg Davis is picking up at Iowa right where he left off at Texas