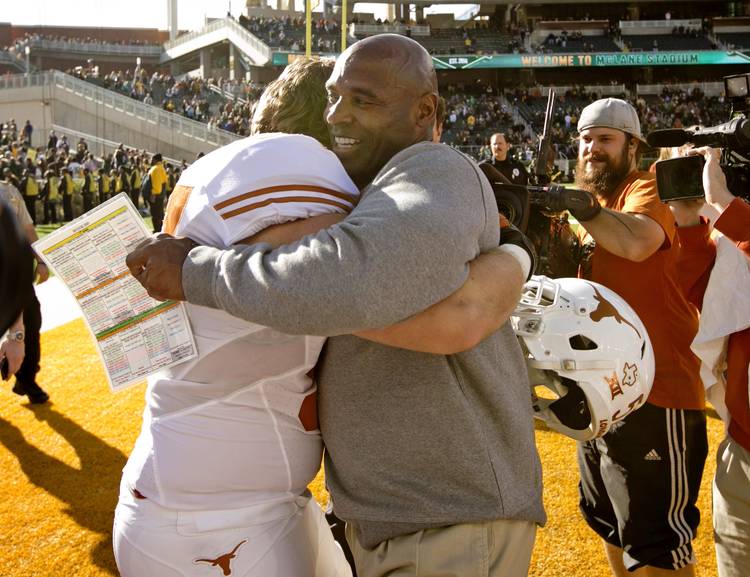 WACO — Charlie Strong came up with the most revealing answer of his two-year Texas tenure following another head-scratching Saturday.

Texas’ head coach sat in the post-game interview session, the 2015 football season in the rear view, trying to make sense of how his team could manage to play so well one week and not bother to show up the next.

This was one of the good days for Texas, but the effect of riding this roller coaster for the last three months had an obvious effect on the man who remains behind schedule in his quest to return this program to its former glory.

“I don’t have any answers for this team,” Strong said. “I wish I did.”

Who can explain a 23-17 road win over a Baylor team that woke up Saturday morning with visions of Sugar Bowls dancing in their heads?

Sure, it came against third- and fourth-string quarterbacks. But this is the Texas defense we’re talking about, statistically the worst in school history. This group made average quarterbacks look like world beaters all season. Remember Iowa State’s Joel Lanning? What about West Virginia’s Skyler Howard? Texas will play a prominent role when their media guide bios are updated next spring.

Adding insult to injury, running back Chris Warren III’s father, a veteran of 11 NFL seasons, tweeted that defensive coordinator Vance Bedford “should be fired on the spot.”

Barbs from players’ parents notwithstanding, the Texas sports information department won’t have to bother updating the bowl section in the spring guide; the Horns finished 5-7 and will miss the holiday festivities for the second time in the last six years.

What we saw on this final Saturday was some Texas Fight, from the first-quarter bench-clearing skirmish that featured lots of pushing and shoving but thankfully no fisticuffs, to the defense bending but not breaking down the stretch.

Strong has to figure this thing out. Blind spots ruined his sophomore season and future occurrences cannot continue if he has any inclination of fulfilling the five-year, $25 million deal he signed to coach here. When I say blind spots, I’m referring to the unexplained no-show performances that plagued his team this season, particularly in true road games. Before Saturday, the Horns had been outscored 150-30 in four true road games. Unacceptable. Inexcusable. Texas.

There is zero rhyme or reason when you look at these scores:

“I think personally we could have beaten everybody we played,” H-back Alex De La Torre said. “We just needed to limit mistakes and the self-inflicted wounds.”

The close losses to Cal, Oklahoma State, and Texas Tech were the kind of losses a fan base can look at as

Strong looked almost punch-drunk after I asked him a question many of you have already contemplated in your conversations: If I told you before the season that you would beat Oklahoma and Baylor, what do you think your record would have been?

The quarterback problems  have been well documented and a rudderless QB ship in the Big 12 is one that’s bound to sink, but the defense we witnessed hold the Bears to 17 points and force four turnovers wasn’t always this fiery. Add the fact that Texas got it done without linebacker Malik Jefferson, safety Dylan Haines, tackle Hassan Ridgeway and linebacker Peter Jinkens, and the scratching becomes more prevalent.

The glass-half-full thinker will enter the spring talking about growing pains that will create more experienced, dependable players next fall.

The glass-half-empty thinker will point to the need to combat the continual breakdowns that turned out to dominate the narrative in a failure of a season.

The fans would gladly settle for something somewhere in the middle. A nice 8-4 finish would make them happier than they’ve been in years.

Looking ahead, Strong has to come up with the right formula — on his staff, in his game plans, and on the field — to get this program back on solid ground.

If not, the next roller coaster ride will be his last at Texas.

Bohls: For Charlie Strong, eight is enough in 2016 … maybe