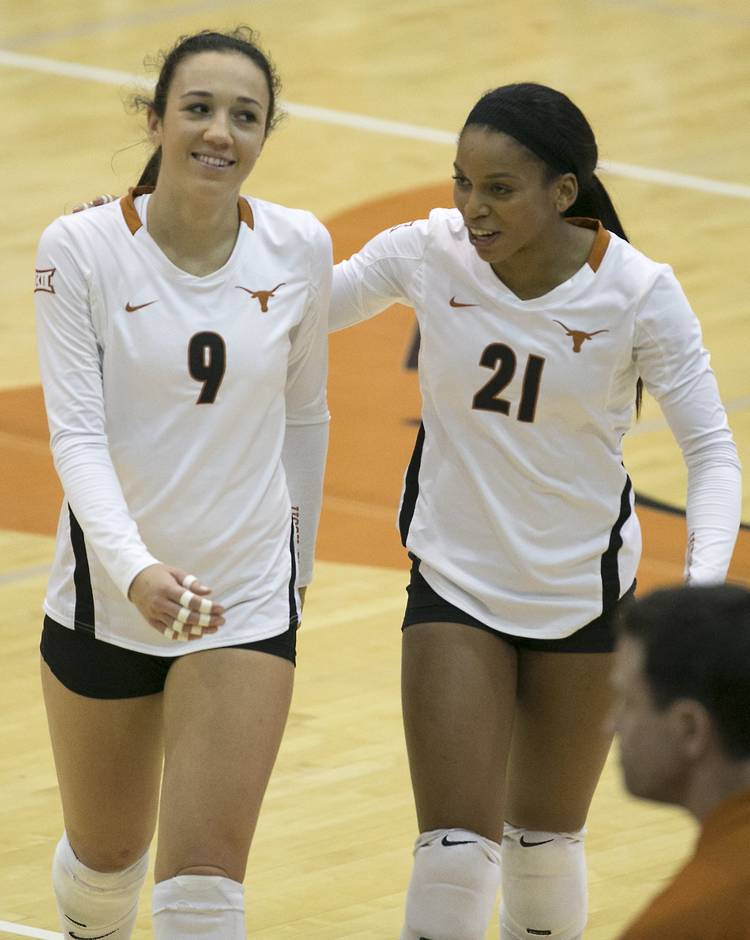 Jerritt Elliott loves his Texas volleyball team for a lot of reasons, but at least partly because the women he coaches, well, they give him a hard time.

Even in the best of times.

And these days definitely qualify as such since Texas is preparing for an NCAA regional semifinal match against 14th-seeded UCLA at Gregory Gym in a loaded field that includes nemesis No. 11 Florida and No. 6 Wisconsin.

“This is one of my favorite teams since I’ve been here,” said senior outside hitter Amy Neal. “Everybody’s actually good friends.”

That includes their coach, because the Texas players routinely bust his chops on the slightest whim.

“He’ll say anything, and I just give it right back,” Neal said, laughing. “I’ll tell him what I think. It’s fun to give him crap whenever he gives me crap.”

Yeah, but that says more about Elliott’s tight relationship with his latest squad than even a hint of insubordination. His Longhorns love him to death.

This, Elliott said, has been “one of the most enjoyable teams I’ve ever had. Why? They’re just fun. And they’re sarcastic with me.”

If that’s a non-sequitur, well, so is this team because it’s a little different from the rest of Elliott’s supremely talented, powerful strikers that have become Texas’ norm.

It’s not that this bunch of players isn’t talented. It is, extremely so, one of the reasons it’s been on a roll all year with just two losses — one at home to these same Gators — is seeded No. 3 nationally, and on the precipice of a Final Four berth.

But that’s like clockwork for Elliott, who has taken Texas to the Final Four six of the last seven years.

This team has been to three straight and — come Saturday night if it can survive defensive-minded UCLA on Friday, then the winner of the Florida-Wisconsin game — will become the first class in school history to reach four consecutive Final Fours.

The three seniors — Neal, middle blocker Molly McCage and libero Kat Brooks — all played as freshmen to some degree for the 2012 team that won the national championship, Elliott’s only title here.

“I think we’ve got a little more balance, but we’re not your typical Texas team,” Elliott said. “Normally we’re very tall and physical, but we can dominate at a lot of positions. This team has a really unique bond.”

There’s no reason to think Texas can’t win another one. Elliott’s been the Nick Saban of college volleyball, stacking one highly-regarded recruiting class on top of another one. His 2015 class ranked second, but Texas has been without a pair of tremendous outside hitters in freshman Micaya White (stress fracture) and USC transfer Ebony Nwanebu, who played one match versus Nebraska and was dominating from the back row before a back injury and other ailments ended her year.

When they return at full strength, they’ll be like another recruiting class next fall. And word has it that Elliott’s 2017 class may be his best ever. Libero Cat McCoy picked Texas over USC but visited Florida and elsewhere. “You come to Texas,” McCoy said, “and not making it to the Final Four is a disappointment.”

Texas has become such a brand name in volleyball that the name alone gets Elliott in living rooms. Well, much of the time, he doesn’t even have to venture that far.

By and large, blue-chippers come to him.

“They come here now,” Elliott said. “And they commit so early. When we got here, we were coming off a 10-18 season and were starting over. Now if we want somebody, 90 to 95 percent of them are going to take a look at us. Nobody comes to Austin and says, ‘That’s a bad city.’ Even the parents want to come on a two-day stay-cation.”

Most of their kids just stay, period. Elliott knows he can sell a winning program along with top facilities, great academics and a super city, but also a cohesive atmosphere. You know, sarcasm and all.

Elliott encouraged Neal, a Lake Travis product who struggled to get on the floor her first year and even then only as a defensive player. She longed to be an outside hitter, and the spring after her initial season she got the chance on the Longhorns’ team trip to Europe. Neal eventually gained Elliott’s trust.

“I didn’t want to be a libero,” Neal said. “Everybody told me to stay here, and it ended up being worth it.”

Today she leads her team into Texas’ 10th straight regional semifinal as the Big 12 player of the year. She’s not unlike another Lake Travis product, Baker Mayfield, a high school friend of Neal and her boyfriend. The Oklahoma quarterback showed up at a Texas match a week ago. They root for each other, they were both conference player of the year in their sports, and both are in the hunt for national championships.

“He’s one of my good friends,” Neal said. “He sat with my parents. Baker’s all over everything. He’s awesome.”

So’s Neal, who has a tunnel-visioned focus this time of year.

“I don’t want this season to end yet,” she said. “I don’t think we’ve peaked peaked yet. I try not to think of the pressure, just working hard to get to the Final Four again. That’d be awesome.”

Golden: Will Texas’ threes fall against No. 3 Carolina?