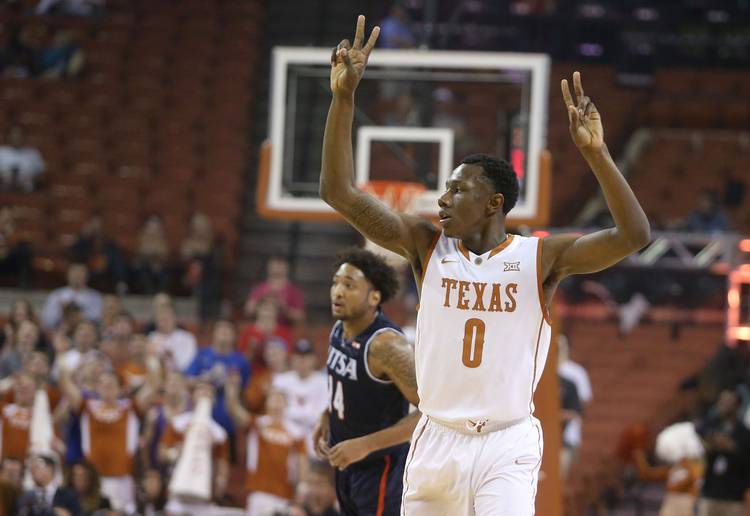 Shaka Smart was more than happy to see some jump shots find the bottom of the net.

He said as much after the game.

But behind the praise was a subtle yet unspoken question: Will those shots go down against an opponent that’s several levels above UT-San Antonio?

The three-pointers were falling with such alarming regularity in the Longhorns’ 116-point uprising that the gym janitor must have considered pulling out the fire extinguisher. Texas hit 15 of 30 triples,  just three makes off the school record set in 1997 against Kansas State. Now for those you who have played organized hoops, you’ve seen teams get on a hot streak and shoot their opponents into submission.

Sometimes, that can lead to the unexpected, like what happened 30 years ago when Villanova made 78 percent of its field-goal attempts to beat heavily favored Georgetown for the national championship. Or on a lesser level, what happened Tuesday night when the Texas Longhorns hit everything they threw up against an opponent they were expected to handle.

Which brings us to the discussion at hand.

Third-ranked North Carolina rolls into Club Erwin on Saturday, presenting a new challenge to Smart’s Horns, who had their best offensive show of the season Tuesday in their 66-point romp.  UNC coach Roy Williams won’t be dressing Michael Jordan, Sam Perkins or James Worthy  for this trip but his 7-1 crew will present one rim-rattlin’ challenge before what Smart hopes is a packed house, 12,000 or so north of the estimated 3,000 that attended the UTSA rout.

Texas has options on the offensive end, the biggest being center Cam Ridley, who has been throwing his weight around in the most positive way possible lately. So the biggest question centers around what happens when the Heels pack the lane as expected, limiting Ridley’s touches and forcing the Horns to fire away from the outside.

Will the jumpers continue to fall, especially against players wearing uniforms that are synonymous with college basketball royalty? It’s one thing drop an Acme anvil on the Roadrunners. It’s quite another to do the same against the Heels and All-America candidate Marcus Paige, who have scored 80-plus points in six of their eight games and boast a lineup of five double-digit scorers.

“It seems like when there’s a game like (UTSA), the ball tends to go down, not just here but just in general,” Smart said. “Some things tend to go your way and the outside shots tend to go in.”

Translation?  Texas was supposed to beat UTSA and when the pressure is minimal, which most often happens in non-conference home games,  players tend to play more relaxed, which can lead to big scoring outputs. When the pressure is turned up, though, the soothing sound of leather meeting nylon can often be replaced by bothersome clanks off the rim.

While experienced hands Isaiah Taylor and Javan Felix have been through their share of marquee matchups, Shaka is interested to see how talented freshmen Eric Davis, Kerwin Roach and Tevin Mack, respond against an opponent some expect to make a return trip to Texas in the spring for the Final Four in Houston.

Before the UTSA game, Mack had struggled the most offensively to start the season, making just 7 of his first 43 field-goal attempts. That’s 16 percent, which might make for an acceptable tip at Vince Young Steakhouse but isn’t a sign of good marksmanship from a scorer who went for 30 points a game his senior year of high school.   He finally broke out with a 7-for-11 performance against the Roadrunners that included career highs in field goals made (seven) and points (17) and could be a harbinger of good things to come as UT heads into its toughest test to date this season.

Davis and Roach combined for another 25 points. Not bad for a trio that made only 4 of 32 shots in their college debut against Washington.

“It gets stressful after a while, I’m not going to lie,” Mack said. “I was kind of down on myself a little bit after the first couple of games (because) it wasn’t going in. I was wondering why it wasn’t going in after I had a good preseason.”

Smart said Mack is one of those players whose demeanor is usually predicated on if the ‘J’ is falling that night. Mack and his teammates can expect the pressure to be amped up a few notches as the Heels are out to avenge an 86-83 home loss last season to Rick Barnes and Co.

I love that Smart is a big-picture guy who understands this team’s fortunes won’t come down to whether or it not defeats the third-best team in the country in a December game, but with that said, Texas’ performance Saturday (be it good or bad) will serve as a barometer in the two weeks leading up to the Big 12 Conference opener against Texas Tech. Shaka will get a who-are-we? snapshot Saturday.

“Those are the type of games as a player you get really fired up for, and as a coach it’s a great chance to see, as a team, if we can take that big step,” Smart said. “It’s certainly not going to be easy, but I think for our guys, they’re excited to come out and play and see what we can do.”

So Texas takes a huge step up in competition Saturday.

We’ll see if its level of play rises to the occasion.