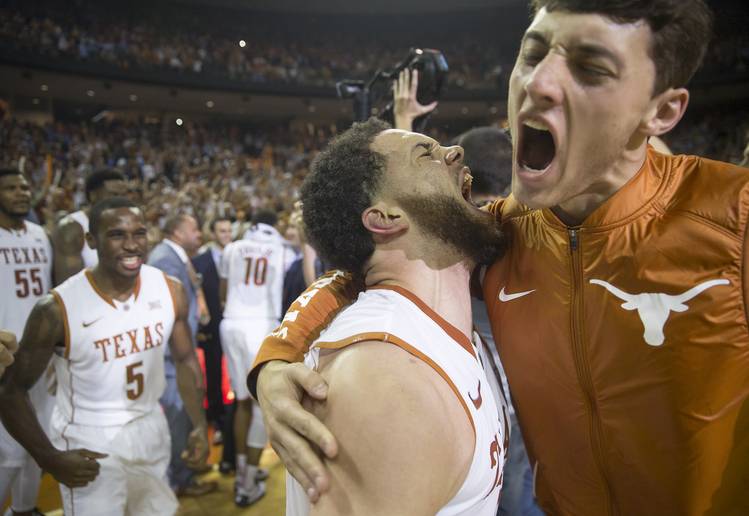 Texas's Javan Felix celebrates a win with Joe Schwartz against North Carolina 84-82 during the second half of an NCAA men's college basketball game at the Frank Erwin Center in Austin, Tex., Saturday, Dec. 12, 2015. RICARDO B. BRAZZIELL/AMERICAN-STATESMAN

Not long after Texas had been dispatched by an average, 10th-seeded Purdue team in the opening round of the 1999 NCAA Tournament, Longhorns coach Rick Barnes stood in the hallway and held a stat sheet in his hands.

He shook his head after his three guards had combined to make only five of 17 shot and scored just 12 points in the four-point loss.

Shaka Smart’s got guards. He’s building a kingdom, but he’s got him some guards.

And now he’s got his first breakthrough victory, a positively electric, 84-82 upset of a No. 3-ranked North Carolina that was a preseason No. 1 college basketball team.

Smart can thank his guards.

He’s got all kinds, too. Short ones, tall ones. Grounded ones, high-flying ones. Old ones, young ones.

Together, those disparate guards responded in style and delivered the biggest victory in Smart’s brief tenure in Austin as the indescribable and relentless Javan Felix sank an 18-foot jumper from the corner for the school’s first win over a Top five team in four years since an upset of No. 2 Kansas on the road.

He and the rest of the guards combined for 65 of Texas’ 84 points and raised the level of play for a Longhorn team trying to find its footing.

“When I walked in the locker room, they mobbed me, and everybody had a water bottle,” Felix said after his 25-point game. “They got me.”

And Felix, the savvy, pudgy senior who never stops shooting, got Carolina. Smart admitted he worried about Felix’s groove and said he thought he “had lost some of his passion” under Barnes. But he quickly noticed that Felix set himself apart with his poise and composure during Texas’ opener against Washington in China.

Felix had the game of his life, a jewel of a performance that will cement him in Longhorn lore for delivering the biggest shot of the game. That shot at the buzzer, which had to be upheld on review, set off bedlam in a sold-out Erwin Center and could jumpstart this 6-3 Texas team into the polls as well as the nation’s consciousness.

In truth, this may have been the biggest buzzer-beater since guard Kenton Paulino launched a winning bucket deep from the wing to sink sixth-seeded West Virginia to send Barnes’ 2006 team to the Elite Eight against ascending LSU. It’s liable to send the Longhorns’ confidence soaring.

Roy Williams sure noticed. He recognized Felix’s great game and gave him a huge compliment, however back-handed it might have seemed.

“He’s got an old-man YMCA game,” the Tar Heels coach said. “That’s not a cut because he made some big shots. He’s old-school sneaky. I’d like to have a bunch of old men YMCA players who play like that down the line. Toughness is part of it. Confidence is part of it. But he and Taylor were a load for us.”

And Smart’s got some old-man guards in the senior Felix and junior point guard Isaiah Taylor, who took over the game down the stretch and had one string of possessions in which he drained a 3-pointer, hit a key floater and found Cam Ridley underneath for what became a three-point play.

“He’s our most dynamic offensive player even if he’s not scoring,” Smart said. “He’s a very good passer.”

Texas remains far from a finished product. But Smart’s got two more than capable guards in the forever-underestimated Felix, the lightning-fast Taylor and a pair of flamboyant freshmen guards in Eric Davis Jr. and Kerwin Roach.

Davis is fearless. He doesn’t know what it’s like to be scared of a big moment. While Taylor drew two quick charging fouls and had to sit in the first half, Felix shifted to the point, and Davis supplied the scoring with 11 of his eventual 16 points. He may be the best shooter on the team although he won’t ever be the volume shooter that Felix is.

Roach is groundless. Gravity doesn’t apply to the triple jump state champion with more hops than a bunny rabbit. He elevates like few others for highlight-reel dunks from way above the rim, but he’s a bit offensively challenged on the perimeter. Roach may be groomed to replace Taylor, who Smarts says is the fastest player he’s ever coached, but he has more trouble playing under control than the at-times unpredictable Taylor.

“They were really good,” Smart said of the two youngsters. “Snoop (Roach) gave us valuable minutes. And Eric, what a huge spark he gave us off the bench. He shot a three early on and gave us a big lift. Those guys are turning into terrific players. They’re not all the way there yet, but they’re getting better.”

Texas pulled out all the stops. And that was just pre-game warmups.

If it wasn’t a flood of orange and white, elongated balloons falling from the rafters or Hookem mascot lowered from the ceiling by a cable, it was the national anthem by an electro-violinist and fireworks on the floor.

This game had pace from the outset, and Texas proved it could match up with the best the ACC has to offer just as Felix outplayed Marcus Paige, the long-limbed star for Carolina. Felix outscored him, 25 to 20, and on one occasion schooled the Tar Heel senior with a spin move that delighted the sellout crowd of 16,540. It was his night.

Texas entered this game, still searching for its true identity, and it may just have found it with some grownup guards and a few others who are growing up before Smart’s very eyes.

None bigger than Felix’s.