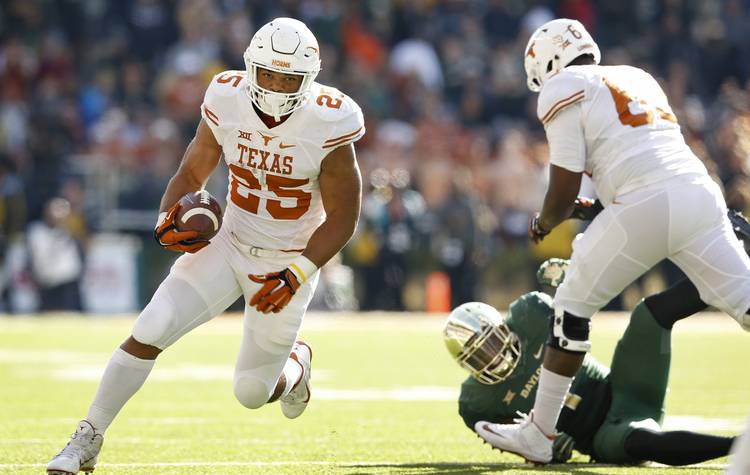 It’s that excruciating time of year to review the preseason predictions for the Texas football team, few of which hit their mark. Charlie, I know your pain.

Appears these 2015 predictions were crazier than most.

With red face and a crow-heavy diet, here goes:

Tyrone Swoopes will start every game this season. What I meant to say was he’d start the first and last game and not a one in between.

Other Swoopesisms back in August:

Will complete 61 percent of his passes. Nope, only 50.5 percent. See above.

Will throw for 2,183 yards. Hard to complete passes from the bench or in a glorified wildcat formation. Threw for 537 yards.

Jerrod Heard will get a few series against Notre Dame (he did), will play sporadically this season (meant to say spasmodically since he started 10 games) and will finish with 254 yards rushing and seven touchdowns (try 556 yards and three touchdowns; who knew Swoopes would become a touchdown machine?).

Johnathan Gray will not rush for 1,000 yards. Alas, he didn’t come close, finishing with 489 yards after missing the last two games. I had him going off for 932 yards and seven TDs.

D’Onta Foreman will be the second-leading rusher with 385 yards and three touchdowns. He did a whole lot more than that. He had 681 yards and five scores before pinkie surgery sidelined him the last two games. He could be next year’s Samaje Perine in the Big 12’s best backfield.

Chris Warren III will rush for 272 yards and one touchdowns. Meant to say he’d get that many in one game against Texas Tech when he went crazy for 276 yards and four scores. He had 382 yards in the last two games of the season. Man’s a stud. Had 470 yards overall.

Connor Williams will be named to the freshman All-America team. He was. So were guard Patrick Vahe and linebacker Malik Jefferson.

John Burt will catch 32 passes for 415 yards and three TDs. The true freshman became Texas’ best deep threat and grabbed 28 balls for 457 yards and two scores, so I was in the neighborhood. Loved him the first time I laid eyes on him in August.

Marcus Johnson will morph into this year’s John Harris role (as the go-to wide receiver) and have 65 catches for 787 yards and eight TDs. He missed more than he morphed, dropping touchdown passes against Iowa State and Texas Tech. He shined against Oklahoma, but that’s about it, finishing with 12 receptions for 130 yards and one touchdown versus the Boomers.

Daje Johnson will have as many drops as catches. He had a few slip through his hands.

He will have at least one long TD run. Not even close, although Texas should have given him more direct handoffs. He had just six carries for 28 yards.

Armanti Foreman will have 24 catches for 438 yards and two TDs. He scored against Rice and Kansas but caught only 11 balls for 182 yards.

DeAndre McNeal will have 17 catches for 212 yards and a TD. Mostly he had a seat on the bench. He played, but I totally whiffed on the bulky tight end, who I thought would explode in 2015.

Vance Bedford’s defense will play as many as eight DBs this year, including Kris Boyd and Holton Hill. He did. Hill played a ton, and Boyd played some and tweeted some, too. In all,17 members of the 23-man recruiting class of 2015 saw the field, and nine of them had starts.

Texas will have nine interceptions. It picked off 13.

Shiro Davis will lead the team in sacks, with six sacks and 10 pressures. Nope. Davis had just two sacks and four pressures, tied for second behind Jefferson’s six quarterback hurries. Senior linebacker Peter Jinkens was the man and had 6½ sacks.

Tank Jackson will be the most disruptive force inside, with 75 tackles and eight tackles for a loss. Jackson never seemed fully healthy and slipped to 31 tackles and 2½ TFL. Different Horns wore the Mr. Disruption tag but never often enough.

Malik Jefferson will be the Big 12’s freshman of the year. He was. He will have 89 tackles. He had 61, second on the team despite missing the last game of the season, in which I’m positive he would have had 28 tackles. Jefferson led the team in pressures with six and had seven tackles for loss, 2½ sacks, one forced fumble and one fumble recovery, which he returned for a TD.

Duke Thomas will have flashes of excellence, but also get burned occasionally.

He did. He ranked third on the team with 58 tackles, brought a ton of intensity and killed it against Baylor to go out with a bang.

Both Michael Dickson and Mitchell Becker will get chances to punt. Dickson kept the job despite one very ill-timed bobbled snap; he got off some boomers and some clangers but generally got better as the season went along.

Finally, here was the season forecast:

Texas will beat Oklahoma. Hey, I got one right. Charlie owns OU.

Texas will lose to Kansas State. No way, in part because Bill Snyder was on, like, his fifth QB.

Texas will almost upset TCU, but lose. At least I didn’t go all in for the upset. Texas was in it right up until the opening kickoff. Thereafter, not so much. That 30-0 first-quarter deficit was a little much to overcome.

Texas will finish 7-5. Invert that. Was counting on those two wins against Cal and Oklahoma State.

Texas will play Texas A&M in the Liberty Bowl. Texas didn’t sniff a bowl, one of just 48 teams to stay home.

Next year Charlie and I both will try to do better.

Bohls: I’ll miss the hell out of Joe

Golden: Texas men are in big trouble (as in big men)