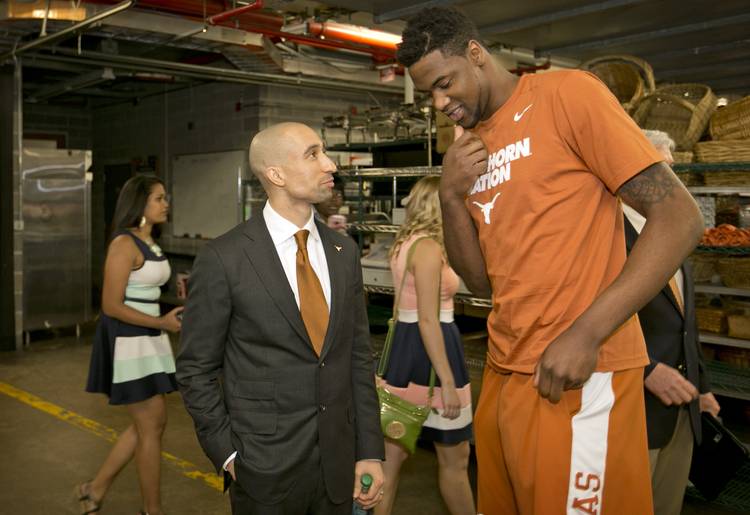 Shaka Smart, talks to his player Prince Ibeh, right, after Smart was introduced as the new basketball coach at the University of Texas on Friday April 3, 2015, at the Frank Erwin Center. JAY JANNER / AMERICAN-STATESMAN

The Texas Longhorns are in a bit of trouble.

Big trouble, if you will.

When I say “big,” I mean the team’s lack of offensive options in the paint — created by the absence of injured center Cameron Ridley — could eventually keep the Horns out of the NCAA basketball tournament.

On the surface, Texas’ 60-57 win over Kansas State on Tuesday night was ugly. Shots weren’t falling, and the Horns suffered through several dry spells before Connor Lammert and Javan Felix delivered down the stretch to secure a much-needed Big 12 victory. With UT’s issues at the post position, an ugly win becomes the twin sister of Halle Berry. You’ll take it.

The Horns are a guard-oriented team now. Ridley’s broken foot could keep him out for the next two months, maybe longer, meaning the pressure will not only be on the backcourt but on posts Prince Ibeh and Shaquille Cleare, who need to produce in the interior. Neither has Ridley’s skills, but combined they could to give the Horns enough production for Texas to stay competitive in the best college basketball league in the country.

The Big 12 isn’t exactly awash in big guys, although Baylor has an All-American in 6-foot-8-inch, 275-pound Rico Gathers, who is averaging 14.1 points and 11.3 rebounds. The other great players in the league are largely perimeter oriented, such as Iowa State forward Georges Niang, Kansas forward Perry Ellis and Oklahoma guard Buddy Hield. Those four would be on conference player of the year ballots right now, and before he broke his foot, Ridley was well on his way to becoming part of that group.

With Ridley out, the Horns will ultimately live and die by something they haven’t done consistently well and that’s shoot from the outside. Texas is making a respectable 35 percent of its three-point attempts, but some of those swishes came when Shaka Smart had a good inside-outside dynamic with Ridley and the guards. In the two games since Ridley’s injury, Texas has made 15 of 51 triples, a .294 percentage that leads me to believe future opponents will invite the Horns to fire away from downtown.

That’s added pressure  on veterans Isaiah Taylor and Felix and the Horns’ three freshmen guards to keep the engine running.

“You have a smaller margin for error when arguably your best player is out,” Smart said, “and it changes how you play offensively because so much was done through him that you just have to do what you do better.”

To his credit, Ibeh scored a season-high seven points and grabbed nine rebounds in a career-high 27 minutes against Kansas State. Cleare added four points and three rebounds. So that’s a combined 11 points and 12 rebounds, which is in the neighborhood of the 12.7 points and 10 rebounds Ridley was giving the team every night. Ibeh said he sometimes drifts mentally when it comes to his own offense, and he lets the guards dictate play. He’s never going to be a guy they run set plays for, but he is plenty big enough to get garbage-man points if he can get his slippery mitts on the ball.

Defensively, Ibeh can’t afford to commit the careless fouls that have dogged him during his college career, especially now that Ridley isn’t there to pick up the slack.

“Even today, there a lot of those where had Cam been playing, I would have been more aggressive,” he said. “I know I can’t do that right now. I have to be more judicious.”

Felix wouldn’t go as far as to paint Texas as a perimeter team but it’s the hand coach Shaka has been dealt. He’s coached small ball in the past so this is nothing new, but things are a lot more challenging than they were at the beginning of the season, when he had the ability to mix his lineups depending on the opponent.

For now, the shots must fall for Texas to remain viable moving forward.

Remember when Shaka called Ridley his most important player earlier this season?

The coming weeks could bring crushing, constant reminders of those words.

Bohls: Charlie and I both off the mark

Golden: It will take more than Taylor for Texas to make the NCAAs