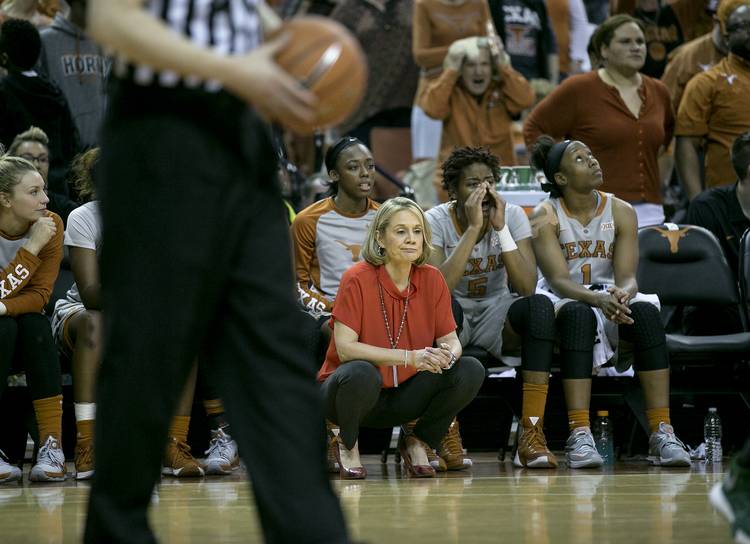 (WOMEN'S COLLEGE BASKETBALL: TEXAS, BAYLOR); The University of Texas Women's basketball team played Baylor at the Frank Erwin Center in Austin, January 17, 2016. This was a key game in the Big 12 race. They'll play again in Waco on the final game of the regular season. Karen Aston of UT on the sidelines of the game they lost to Baylor. LAURA SKELDING/AMERICAN-STATESMAN

On the court. In the press conference. Inside their minds. Everywhere it counts.

Except in the Erwin Center stands, where 8,996 fans — the largest crowd of the season — convened to watch the fourth-ranked Longhorns’ breakthrough moment this season.

But that moment didn’t come.

Instead, sixth-ranked and still underrated Baylor broke Texas 80-67 in this battle of almost unbeatens, a pair of teams whose only collective loss in 34 games had been Baylor’s seven-point defeat at Oklahoma State. The Lady Bears (18-1) broke the Longhorns’ perfect season, broke their 16-game win streak and broke their will.

As they always seem to do.

Not that any one on either side wanted to admit it, the whole silly, just-one-game-and-all notion.

Not Bears outstanding, fiery coach Kim Mulkey — the Dorothy Vader of the Big 12, to borrow from “Star Wars” — who declined to answer a question about Baylor’s usual dominance of a conference it’s won five consecutive times and of a rival it’s now beaten 12 games in a row.

Not Texas’ terrific coach Karen Aston, who commended the fans for showing up in droves with the biggest Erwin Center audience in three years but did concede, “It’s a home game, and obviously it stings that we didn’t hold our court.”

Not a single player on either side since both teams downplayed the significance of the contest.

Hogwash. It wasn’t one game. It was a statement game, and Baylor made the same repetitive statement it usually makes. It’d be wrong to say the Longhorns blew it. They didn’t. They lost to a better team.

But Aston should have owned it more. It’s OK to show some anger, Karen.

She’s got a nice team. A very, very nice team with a lot of good parts, like a stud center in Imani Boyette, a feisty sharpshooter in Brooke McCarty and some depth at guard, although those guards are erratic, as evidenced by the 21 turnovers. And they’re having a spectacular season.

But Mulkey’s got the best player in the conference in Alexis Jones, a big-time scorer in Nina Davis (24 points), physical players who bang in the paint and sure-handed guards like assists leader Niya Johnson. And a likely No. 1 seed, come March. Texas might even be a No. 2 seed.

But of course, as Mulkey plainly knows, these two teams will play again in Waco and perhaps in the Big 12 Tournament. Who needs to stock a bulletin board, although Baylor owns that, too.

When asked if Baylor’s heavy experience in big games might have helped, Mulkey said, “That’s our normal-size crowd at Baylor. We sell over 5 or 6 thousand tickets. A (road) crowd is not going to faze us. But I thought the crowd here was special. They should have that kind of crowd every game.”

Even Texas guard Empress Davenport declined to dish out a compliment to Jones, the magical Baylor swing guard who transferred from Duke, partly to be closer to her wheelchair-using father, after two years that included a torn ACL in one knee and microfracture surgery on the other. Jones put in a career-high 29 points. A real shame she’s not yet 100 percent recovered. She’ll be an All-American and maybe Big 12 player of the year.

You couldn’t find a much better atmosphere than the raucous scene at the Drum, where fans packed the lower bowl and some mezzanine seats, but Texas didn’t get it done. No shame in being second-best to Baylor.

These teams haven’t even reached the midway point of the Big 12. But if Texas wants to be Baylor, it has to beat Baylor, especially on its home court, and that didn’t happen Sunday.

Despite the rankings, Baylor’s clearly better than Texas. It plays a more physical brand of basketball. Notice the Bears shot 12 more at the foul line than the Longhorns and hit a staggering 24 of 25.

Baylor’s more dominant in the paint, where it outscored Texas by 10, even though Aston went big from the outset with both 6-7 Boyette and 6-5 Kelsey Lang in the starting lineup.

Texas was very much competitive. In fact, were it not for a suspect charging call against Lang and a dagger jumper from Jones in the last two minutes, the Longhorns might have clawed all the way back from a 19-point deficit. They did get to within 70-64, but Jones let Texas get no closer.

But there will be others down the road, a road that will take them to Waco.

Golden: It will take more than Taylor for Texas to make the NCAAs

Golden: Texas women will soar minus the turnovers