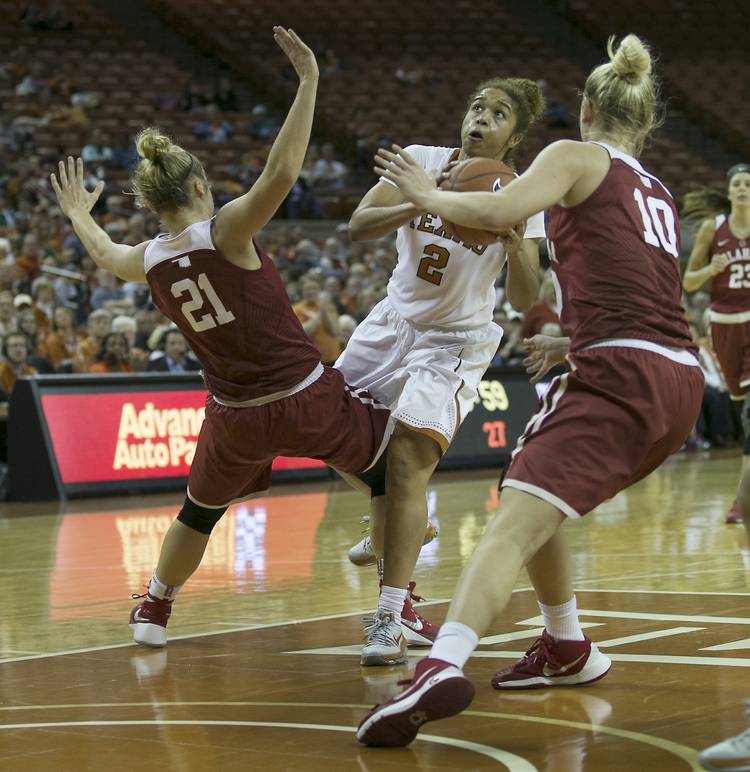 Texas' Celina Rodrigo gets called for an offensive foul during second quarter action against OU.--The Texas Longhorns played host to the Oklahoma Sooners in a Big 12 game at the Erwin Center in Austin, TX Saturday January 23, 2016. RALPH BARRERA/ AMERICAN-STATESMAN

The seven-point win over Oklahoma solidified a nice two-game bounce-back from the disappointing performance against Baylor earlier this month, but one area is keeping a really good team from taking an even larger step toward elite status.

The turnovers aren’t killing Texas right now, but there will come a time when good defense and stellar play from All-American-to-be Imani Boyette inside won’t be enough if the Longhorns don’t limit the number of careless possessions.

Call Saturday’s 83-76 decision what it was: a solid win by Texas over a Sherri Coale-coached team that’s playing well despite not being as athletic as we’ve seen over the years.

Want to see an example of how far the program has come under coach Karen Aston? The Longhorns finished 17 points shy of the century mark despite committing 25 turnovers. That’s an extraordinary number of points when one considers that Texas could have had 25 more opportunities to score.

“If we had 25 turnovers (in the past), I’m not sure we would have scored 83 points,” Aston said. “Some of it is a reflection on me, and some of it is youth, though some of our older players made some uncharacteristic turnovers.”

At 18-1 overall and 7-1 in the Big 12, the sixth-ranked Horns are already one of the best stories of the college basketball season, particularly the 6-foot-7 Boyette, who languished on the bench for the first half of last season before finding her stride. She finished with 18 points and 11 rebounds and was just three blocks shy of a triple-double.

Guards Brooke McCarty, Ariel Atkins and Empress Davenport have made some strides, plus there is plenty of depth in the paint and on the perimeter.

I’ve seen enough of Boyette to know she’s a money player who will get hers on both ends, regardless of the competition, but how far Texas advances in the postseason will largely come down to these guards. That group has tremendous upside but will have to tighten up if the Horns are to go special places in March.

“We just have to slow down,” McCarty said. “We have to calm down and take it one possession at a time.”

One quick glance at the national rankings reveals what we need to know about the importance of taking care of the rock. Top-ranked UConn averages just 12.1 turnovers a game. No. 2 South Carolina? Just 13.5. Notre Dame (15.1), Baylor (15.0), and Maryland (15.3) are in the same neighborhood.

Texas is averaging 17, which indicates the Horns are oh-so-close to making even more noise in national circles if they hunker down in this area.

Coaches understand that turnovers will always be a part of the equation. They can live with mistakes that come from effort: an over-the-back foul here and a dive for a loose ball there. But the ones that are plaguing this really good Texas team are the miscues such as careless passes and out-of-control play.

Women’s athletic director Chris Plonsky has a gleam in her eye when discussing the potential of this ballclub but understands the importance of turnover margin. She’s even thinking about cooking up an idea or two to help.

“I’m going to invite them over for lasagna,” she said. “It’s my mom’s recipe, and I haven’t tried it in awhile, but it’s whatever I can to do cut those turnovers down.”

It’s up to Aston to determine when to tell her players to ease off the pedal and when to mash the gas, because turnovers often happen when players hurry. The biggest concern is losing their aggressive edge for fear of making a mistake. That happened last week against TCU when Texas committed 14 turnovers in the first half before playing clean with only two in the second half.

“To get where we want to be, we have to clean up some stuff,” Aston said.

There’s something to be said for knowing what needs to be fixed. If Aston makes that happen, her team could soar to places we haven’t seen in a good long while around these parts.

Bohls: Baylor too much for Longhorn women — again