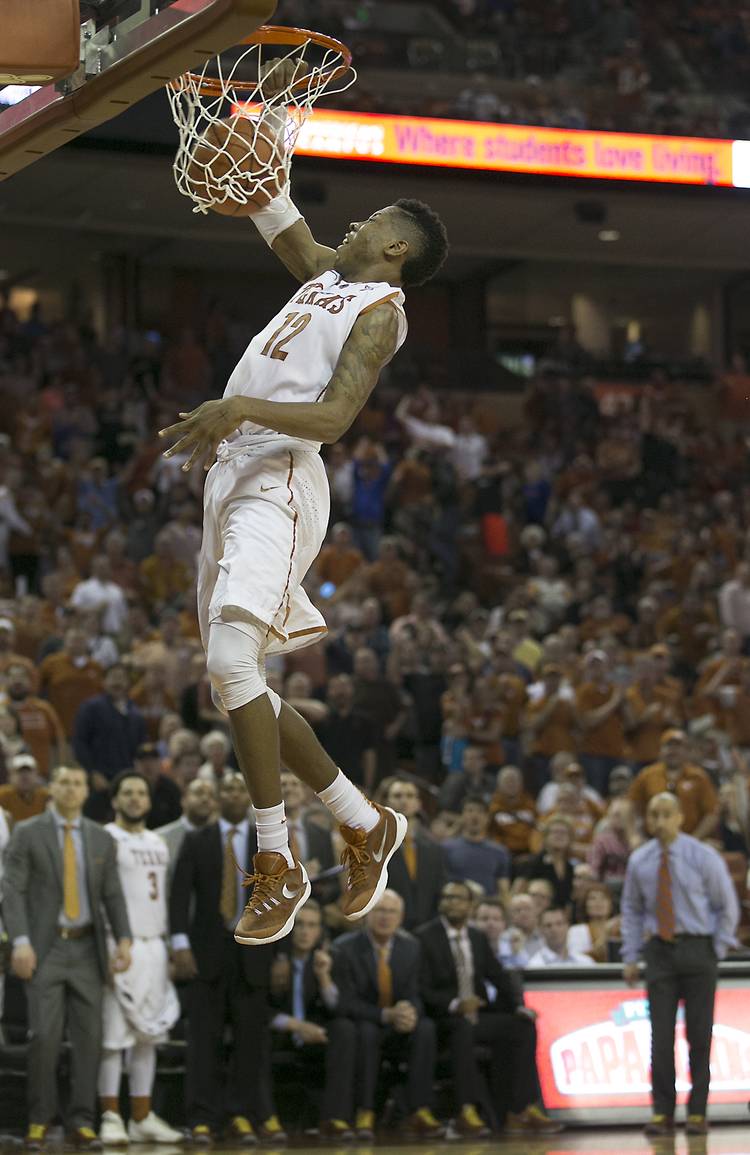 When Texas takes the basketball floor the next time, the calendar will say February.

The Longhorns’ record will say they will be playing in March.

That’s after the Big 12 Tournament March.

Texas is looking that good. And the 14-7 Longhorns are that entertaining, upwardly mobile, energetic and even that confident. Very confident. “I can’t remember when I’ve seen a Texas team that enthusiastic,” former Longhorn hoops coach Leon Black said.

Just don’t suggest they’re peaking because they held off a disappointing Vanderbilt team for a 72-58 victory in the Big 12/SEC Challenge on Saturday, the Horns’ fifth win in six tries. But they’re improving. Drastically. When Prince Ibeh is posting consecutive double-doubles as he has the past two games and dunkmeister Kerwin Roach is elevating — literally and figuratively — his game, Texas might be taking off. Those two combined for seven dunks as the undersized Longhorns put up 40 points in the paint.

Shaka Smart had some fun with questions about his team’s growth and potential. And, yes, its chances for an NCAA Tournament bid.

“I haven’t gotten my invite to the NCAA selection committee yet,” Smart good-naturedly smart-alecked. “I think we could be (an NCAA Tournament team). But we’ve got to keep getting better.”

His Longhorns are definitely doing that.

Even after watching his team play perhaps its best first half of the year, holding Vandy to 16 points and zero treys, Smart isn’t going to get caught up in all the talk. Not when he’s playing in the best conference in the land and his team has three of its next four games on the road against Baylor, Oklahoma and Iowa State.

“I know when you turn a page on the calendar to February, everybody talks about bracketology and the bubble and locks,” Smart said. “There is a bubble, and a lot of the teams that are on it are not on it when it counts. In 2011, we were one of the last teams selected. And when we got selected, my friends Jay Bilas and Dick Vitale and the whole crew at ESPN, they buried us. But it didn’t matter. We were in it.”

Right up through the final weekend. While no one will suggest Texas will mimic Smart’s 2011 Virginia Commonwealth team that streaked to the Final Four with a win over Kansas, of all teams, it’s easy to see Smart is coaching his team up and gradually integrating his Havoc style here.

Well, sort of. Call it Half-a-Havoc. Maybe it’s Helter with not so much Skelter, but it’s getting there.

Smart’s full-court pressure on both ends of the floor might not have arrived in full yet, but it was on display Saturday when his guard-centric Texas team pressured Vanderbilt into costly turnovers that the Longhorns converted into run-outs and easy fast-break points. For the game, Texas finished with 20 points (to Vandy’s four) off turnovers, a staggering ratio that Smart will take any day. A half-court trap here, a full-court press there. It’s coming.

He’s breeding the same full-speed-ahead, attacking style both offensively and defensively that landed him this Texas gig. Now maybe it’s still in the petri dish stage for his Erwin Center laboratory. Without Cam Ridley, Texas is starved of a bulky center who can be dominant in the paint, but it’s finding its way with an energized, transformed Ibeh, who is blocking shots, dunking with ferocity and, yes, even making 5 of 6 free throws.

Texas will have to rely on this frenetic style because it has neither great perimeter shooters nor a high-scoring frontcourt. But it’s even making free throws now, with 20 of 26 Saturday and 44 of 62 over the past two games. That’s a lot of misses, but the sheer volume reflects the Longhorn guards’ ability to get to the rim.

Granted, 12-9 Vanderbilt might well be the biggest bust in America, but the Commodores are not without talent with two starters projected as potential first-round NBA draft picks. Texas doesn’t shock people with its talent, but it’s streaking and brimming with confidence. And February looming ahead.

Golden: Texas’ talented freshmen can lift Horns into the NCAAs

Bohls: In Charlie Strong, Texas now has itself a new Coach February