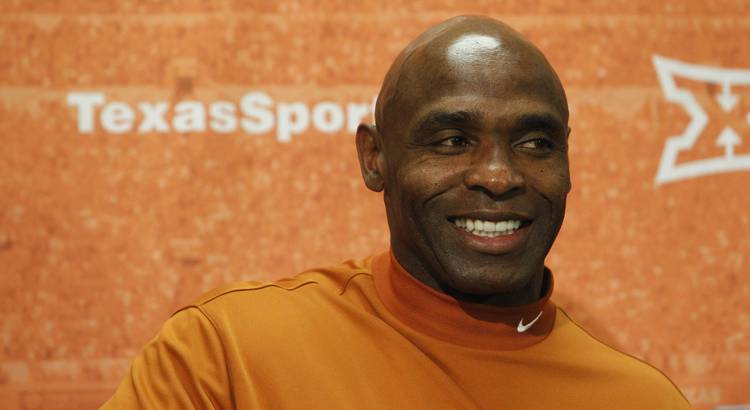 Charlie Strong had his best day as a Longhorn on Wednesday, a certain game in the Cotton Bowl last October notwithstanding.

But if the results from national signing day are any indication, better days are to come. Hopefully, days as soon as this September.

That said, it will be difficult to top Strong’s second full recruiting class, which, with signed letters of intent coming in so fast the Texas fax machine nearly burst into flames, soared the Texas ranking to a composite No. 11 in the nation.

The Longhorns climbed to 11th from, well, nowhere. The group was ranked 32nd on Tuesday.

Strong signed the best safety in the state. He signed four 4-star defensive linemen to address an immediate need with the departures of Tank Jackson and Hassan Ridgeway. He got a stud cornerback, an outstanding offensive tackle and has outstanding wide receivers coming out of his ears. He got autographs from 10 players ranked among the ESPN Top 300.

Banner day doesn’t begin to describe it, unless it’s an awfully big banner.

And it reflected any number of positives for a program that had floundered with a pair of losing seasons, no bowl game in Year 2 and a tedious search for an offensive coordinator that necessitated a spot on the private plane for the university president the day after he appeared before the Supreme Court.

In the court of public opinion on Wednesday, however, Strong struck a key blow for himself. These last two recruiting classes are so strong, they might even help buy him a fourth year in Austin if the 2016 record doesn’t reach eight wins.

Texas now has itself a new Coach February. And that works because the original one won a national championship and produced a Heisman Trophy winner, a couple of Rose Bowl wins and the most high-water moments in school history in 40 years. Even if Strong and Mack Brown don’t do it alike. Brown would have his next class near full before the first kickoff in September whereas Strong doesn’t get serious about it until the last tackle in December. (Or November, if there’s no bowl game.)

Strong practices patience like few others. He read recently that some 380 players had decommitted this recruiting season, which shows the value of those early pledges. So he bided his time and flipped players from LSU, Michigan, Georgia, Oklahoma and Kansas State and swayed safety Brandon Jones from Texas A&M. He got ’em, big and small. He got big ol’ 328-pound defensive lineman Chris Daniels and Lil’Jordan Humphrey, “the best name of them all,” Strong said.

In all, only 32 players visited the Austin campus, and 24 signed. Pretty nice success rate.

“When they make commitments, you know who to attack, and I didn’t want them to attack us,” Strong said. “I don’t panic.”

The class underscores the power of Strong as a recruiting giant. Get alone with him in a living room, and he’s likely to leave with the blue-chipper and maybe even the sofa. He gets what he wants, virtue of two classes that have each led the Big 12 and ranked in the top 11 nationally. He’s persistent, but he’s also down-home and as genuine as front-porch lemonade.

In between sampling Houston linebacker Jeffrey McCulloch’s mother’s ribs, cabbage and cornbread and going back for seconds for Manor linebacker Erick Fowler’s mother’s pancakes, Strong has cemented relationships with the players, their mommas and papas, their sisters, even Euless Trinity defensive lineman Jordan Elliott’s great-grandmother. He builds a trust and a bond that transcends the football field.

Charlie will shake down everyone in the family tree and unloosen his belt buckle for every family recipe. He’s good people, and that shows up in dining rooms and dens across the state.

Bobby Burton of 247Sports called the late flurry by Strong “as good as it’s been done at Texas. Of course, Mack had a different way. Just shows there’s more than one way to skin the cat.”

Which is fine, so long as the cat gets skinned. Flurry? Heck, Strong landed a whopping nine four-star prospects since Jan. 28 alone, and seven in the final 24-hour span.

Texas’ sensational class grabbed the national limelight and didn’t let it go until Elliott, a four-star defensive lineman who at one time was committed to Michigan, Baylor, Houston and, I think, Prussia, was the last to jump aboard.

With the addition of 24 highly regarded players, any number of which may start or play a great deal in 2016, Charlie Strong may have turned the corner. That’s how big this day was.

“From a talent perspective, absolutely,” Burton said. “I’d expect four to five full-time starters by the end of the season and 12 to 15 contributors. Still gotta see what the offense looks like, though.”

But he’s got the talent. Enough to win the Big 12 next fall?

“I knew that was coming,” Strong said Wednesday. “Let me put it together, and we’ll see.”

It’s hard to know how many of these freshmen will start or even contribute immediately. But Strong mentioned the defensive front and offensive line as the priority areas. As Charlie cracked on Wednesday, “If it was up to me, I’d sign 25 big-bodied guys. I don’t think you can have enough big-body guys.”

You don’t. Large, agile defensive linemen are what separates the SEC from the rest of college football.

So it was just a grand day, so big that I’m surprised there’s been no momentum for Charlie for President. But then, we’re still not sure he can win in Iowa. You know, 24-0 and all.

But he got a little closer to turning that corner.