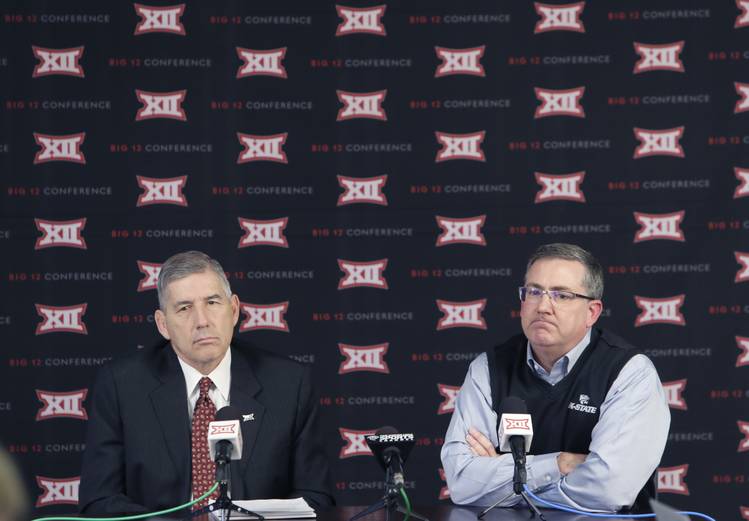 Big 12 commissioner Bob Bowlsby, left, and Kansas State president Kirk Schulz listen to a reporter's question after the conference's meeting Friday, Feb. 5, 2016, in Irving, Texas. Big 12 presidents and chancellors came to one agreement while working through the possibility of a football championship game, expansion and a league-wide television network, they are going to defer all comments to commissioner Bowlsby. (AP Photo/LM Otero)

OK, the members stood together. For this league, troubled with perception problems as well as inter-league strife with destabilizing comments from two of its university presidents, that collective stance represents progress. For now.

And if you believe the campfire kumbaya scenario that commissioner Bob Bowlsby and league board of directors chairman Kirk Schulz portrayed in the two days of meetings here, the Big 12 also stands together with a bright future, David Boren’s and G. Gordon Gee’s splintering recent remarks notwithstanding. That’s what Big 12 fans should take from these gab sessions at the league’s office in Irving.

“I think there’s a unanimity among the 10 schools,” Schulz said. “We’re ready to do what we need to make sure the conference is strong. We’ve come a long way in six months. If we’re committed to the strength and stability of the conference, then it becomes tactical.”

It’s clear the majority in the Big 12 room wanted some to change their tactics.

Boren and Gee, the rest of the league insinuated, pipe down. Neither spoke Friday afterward. Neither did Texas President Gregory L. Fenves. The conference fathers desperately want to paint a picture that they’re all getting along, at least for the time being.

Asked about the perception the league is weak and unstable, an irritated Schulz said, “Frankly, it drives me bananas, all the talk about instability. I don’t necessarily understand why it’s out there.”

Well, he might consider looking south to Norman, for starters.

However, the league is much more stable than it may appear from the outside.

It got a team in the second College Football Playoff after almost getting two in the football Final Four in 2014. Texas Tech’s Kirby Hocutt now chairs the CFP selection committee. The Big 12’s killing it in basketball, although March will reveal a lot, and that hasn’t been the Big 12’s favorite month. It had the biggest distribution of money of any of the Power 5 conferences, but that status will change in the coming months. Its 10 members have big shares of a big pie, but their collective voice has been diminished, at least partly by their own doing. Cue Boren’s remarks.

As for formal action, the league took none this week. Not so much as a straw vote. But they’re still fighting the image of a straw conference, which will almost certainly remain until they grow to 12 or more members or start winning championships in the major sports.

Everything is still on the table, but the table has been moved to the May/June meetings in Irving.

“All 10 CEOs are open to the idea of looking at the number of schools, a championship game and what a (league) network might look like,” Schulz said.

They discussed expansion, but heard no report from the “composition committee” made up of Oklahoma President David Boren, West Virginia’s Gee and Baylor’s Ken Starr. Bowlsby said no individual school candidates were ever discussed in the four-hour meeting Friday. The leaders are so emphatic about their so-called contentment that they won’t even call it an expansion committee, even correcting a reporter who used that phrase.

Schulz said the 10 presidents of the Big 12 schools — actually TCU has a chancellor, and Oklahoma State and Kansas sent general counsel proxies — went around the table and gave their opinions, none of which was shared with the media.

Boren ducked out and declined requests for interviews, deferring to the conference leadership. But he has been outspoken in the last months, including nine days ago with an hour-long impromptu session after the school’s board of regents meeting.

He talked of being tired of being “the little brother” to the other Power 5 conferences by being smaller. He’s talked of a league being “psychologically disadvantaged.” He’s touted a championship football game, wants to add two more teams and favors a league-wide network.

All are still possible. And none of that is possible. The Big 12 Network might be the least likely because it would call for Texas to fold its lucrative Longhorn Network into a conference plan and probably be reimbursed for its annual take of $15 million. All the other nine schools have third-tier rights of their own, but nothing close to Texas’ income. Asked how much money Kansas State makes off its network, Schulz deadpanned, “We make tens of dollars.”

One athletic director told the American-Statesman this week that “we have to protect the brand. And our biggest brands are Texas and Oklahoma.”

One of those doesn’t seem all that protected these days.

Schulz, however, put it best.

“If you’re having a family argument, is it better to do it at Applebee’s or at home?” Schulz said. “I think we’re at a point where we decided today that, when we have the family arguments, we’re going to do it at home with the door shut.”

The door’s still open for a title game as well as slightly ajar for a league-wide TV network and a bigger conference through expansion. And so long as Boren and Gee stay mum, the door’s not coming off its hinges.