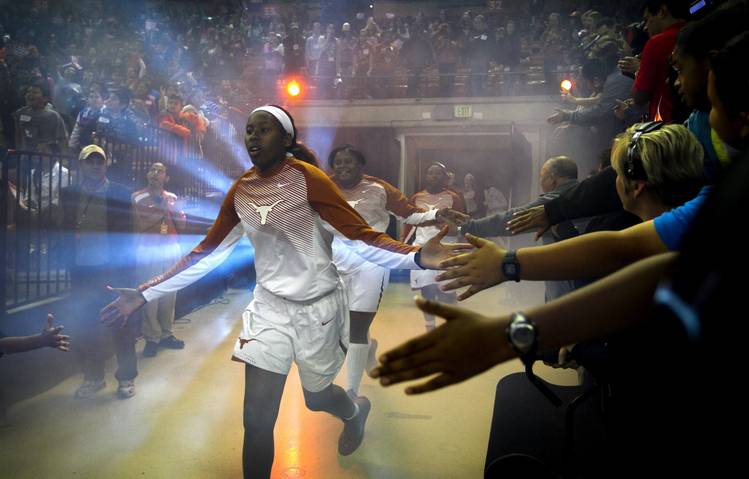 Cathy Self-Morgan can remember the game as if it were yesterday.

Her Duncanville Pantherettes were losing to Manvel in the finals of a basketball tournament game in Pasadena. Not just losing. Getting killed. By 20.

And at halftime, the legendary coach let her team have it. And then she stepped aside.

It was Ariel Atkins’ turn.

In choice words that might not have been entirely family appropriate, Atkins blistered her teammates. The then-junior guard ripped into them as well as herself.

“She unleashed on these girls,” Self-Morgan recalled. “She had them all up in her face, and she was right in the middle of them. We would not be refused that game.”

Duncanville went on to win. As it did most of the time, evidenced by a 105-game winning streak and back-to-back state championships during Atkins’ time there.

After all, as Self-Morgan points out, Atkins only had three losses her entire high school career. One of them came in the finals of a Class 6A state championship — to Manvel, oddly enough — and current Longhorns teammate Jordan Hosey. That defeat didn’t sit too well, either.

“Losing your last game is like a stab in the heart,” recalled Atkins, who fouled out of the game in the closing minutes. “It was devastating.”

She’s not losing a whole lot more often in college.

As a sophomore guard for sixth-ranked Texas, Atkins plays for a team that beat 20th-ranked Oklahoma State on Wednesday night for its 22nd win in 23 games. She made just her second start of the season, which might as well have been the second start of her career.

Atkins, you see, was just 14 games into her collegiate career a year ago when she went down in a freak accident in a Dec. 11 practice that required post-season ankle surgery and months of painful rehab and delayed a brilliant future.

“I stepped on a teammate’s foot and tore everything in my ankle,” said Atkins, who missed eight games because of the injury. “My leg went numb. I couldn’t feel anything.”

After months of grueling workouts, regular laps in the Gregory Gym Aquatic Complex and lots of frustration, Atkins still wasn’t ready for this season and missedthe first nine games, which “seemed like forever.” She tried art, drawing the map of Texas in crayon and etching the world with the help of her artistic teammate Diani Akigbogun. She was comforted by family and friends. She relied on her Christian faith.

“You can’t really harp on the past,” she said. “But I know we can make some noise here.”

This 5-foot-10, left-handed guard is just now rounding into form as the “complete package” that Self-Morgan says she is. By the time she finishes up at Texas, she could mature into the best player that Karen Aston has ever had in Austin. She’s nowhere close to a finished product. The streaking Longhorns continue to feed off Imani Boyette inside and the knifing drives by the spectacular Brooke McCarty, but the fiery, competitive Atkins’ time is coming.

She had a 22-point, 11-rebound game against Iowa State and followed it up with 16 points, four rebounds and two steals against Oklahoma State. But she was also asked, along with Empress Davenport, another Duncanville product, to defend likely Big 12 player of the year Brittney Martin. Atkins is barely scratching the surface of her talents. Is she 100 percent physically? “No,” she said, “I’m 98-ish.”

She’s very athletic, she’s the best free throw shooter on the team at 84 percent, and she’s a terrific shooter on the perimeter. How terrific? She once told a reporter when she was at Duncanville that she wanted to shoot 100 percent. Not at the line, but from the field.

“I felt I could. I still think I could shoot 80 percent,” she said. “In college? No, not with the defensive players we play. This is a very good league.”

And Atkins someday may be in a league of her own. Self-Morgan brags on her like she’s one of her kids. She goes on so much that she ends her description with “and about every other positive adjective there is.” Atkins describes herself as “quietly bossy.”

She wants it all so badly.

“Sometimes,” Self-Morgan said, laughing, “I had to push her back and remind her I was the coach. But she backs it up. She averaged taking five charges a game. She’ll do a lot of great things in this game. She’ll go to the WNBA, the Olympics. Just watch out. She’s close right now, but she’s not all there yet.”

That’s Atkins, a soulful, religious person who writes in her journal almost every night, idolizes Tamika Catchings and who hardly goes a day without texting or talking to her younger brother B.J., a rising track star in the 400-meter and 800-meter runs at Duncanville.

Asked how much better can Atkins be, McCarty said, “A lot.”

To which Atkins interjected, “A LOT.”

And that’s the drive and passion that fueled her rise as a McDonald’s All-American and a cornerstone for Texas’ return to national prominence. If the Longhorns are truly to make a profound impact in the near future, Atkins will play a large role.

“I said after the Iowa State game that she’s starting to feel more comfortable,” Aston said. “I’m sure she would say she’s not where she needs to be, and that’s playing every possession without worrying about making mistakes. That’s what’s special about these two (Atkins and McCarty), they play every play.”

Which is exactly how she approached basketball at Duncanville.

A win in her final high school game would have meant three consecutive state titles. A loss, and it might as well have meant the end of the world. Metaphorically speaking.

“She took it very personal,” Self-Morgan said. “She blamed herself, but that whole team was driven. They were all blaming themselves. For the next two to three weeks, it was hard to pull them together. It was hard to stomach. I had to let ‘em know life goes on.”

Life has. And so has her basketball career.