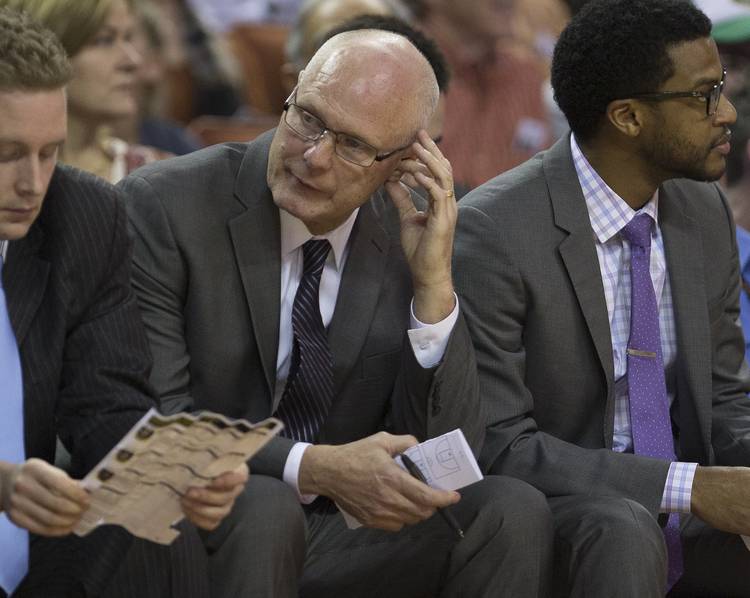 The Mount Pleasant high school basketball team was playing one of its big rivals in Michigan and was losing to Saginaw Eisenhower. Badly.

The other team’s star point guard was going crazy and lit up coach Denny Kuiper’s team for 30 big ones.

Kuiper, always the gracious one, congratulated the opposing coach and told him how lucky he was to have that player.

“’You can have him,’” Kuiper recalled the coach barking. “‘He’s a pain in the butt. You never know the next day if he doesn’t want to practice or his mother’s calling.’

“So it struck me. All coaches are dealing with the same issues. There’s no perfect player. So I chose to see the strengths and not the weaknesses.”

There’s no perfect coach, either. But the balding, trim, 66-year-old Kuiper has helped shape some reasonable facsimiles. Long after his retirement since becoming a high school varsity coach at 23, he is doing his part to remove any imperfections with Shaka Smart’s Texas team. That would be the flaws of the players and the coaches.

While assistant Darrin Horn tutors the big men, David Cason the guards and Mike Morrell the wings, Kuiper’s scope is a little broader. He sees the big picture, but tends to a lot of the little things. Like a player’s temperament and time demands and girlfriend issues and classroom problems. Like a coach’s fractured relationship with a player. Like whatever Smart needs.

He’s been doing this for more than two decades now and has worked with more than two dozen college head coaches, including Indiana’s Tom Crean, who both played for and became an assistant under Kuiper. The two first met when Crean was in elementary school, and they remain close.

“He knows how to hit me with something that strikes me in an inspirational way,” Crean said. “He knows how to tell you the truth, the unvarnished truth. He doesn’t beat around the bush, doesn’t sugar-coat anything. And he’s so smart, he disarms people. He can blend into a group or run it.”

Kuiper’s blending in quite well in Austin.

Horn’s known Kuiper since Crean recruited him to Western Kentucky, and he’s all in. Kuiper, you see, offers a Rubik’s cube way of coaching, seeing challenges from different angles and working toward a finished product. Horn said Kuiper’s advice paid off when dealing with Steve Novak and Travis Diener, two future NBA players he recruited for Marquette.

Crean said Kuiper had a big role in helping Marquette get to the Final Four in 2003 — the same one Texas reached — with those two players as well as a slender, athletic guard named Dwyane Wade.

“You couldn’t find one guy not positively impacted by him,” Crean said. “He’d strike into Travis’ competitive nature, and he could help build confidence in Dwyane. You name it. He had relationships with all of them.”

Kuiper’s doing the same thing at Texas, whether it’s a coach or a student manager.

“He brings a wealth of experience and a different perspective,” Horn said. “A coach will say about getting a player to do something better, ‘I’ve told him 100 times,” and Denny will say maybe you need to tell him in a different way.”

As Kuiper said, “What might motivate Prince Ibeh might not motivate Kendal Yancy. Every player should coach before they play. I know it doesn’t work that way, but if they could, they’d be better players.”

Kuiper’s listed as a special assistant to Smart although his contributions rarely lend themselves to offense or defense. He’s part coach and part guidance counselor, a career arc he began after retiring as a highly successful high school coach in Michigan and earning his master’s degree at Central Michigan. He’s a little bit sports psychologist, a little bit mentor and a whole lot friend and confidante.

“He had a coaching background and a counseling background,” Smart said of Kuiper, “and we really hit it off.”

That was seven years ago. Smart’s and Kuiper’s paths first crossed at VCU when close friend Dave Telep recommended Smart reach out to Kuiper, who lives in Raleigh, N.C., with his wife Terree. And they haven’t parted since. That first year, Smart guesses Kuiper attended three-fourths of VCU’s games. As Kuiper did with Crean’s Marquette team, he helped get VCU to a Final Four.

“Shaka invited me up,” Kuiper said. “and seven years later, he keeps inviting me up.”

The most recent time came last March. Smart was hired by Texas on a Thursday night and was introduced the next afternoon. By then, Kuiper had already loaded up his 2011 white Cadillac and embarked on the 21-hour road trip to Austin.

And just hours later on a Saturday night, Smart was having dinner with Isaiah Taylor, paving the way for a life decision by the Texas point guard, who chose to remain at Texas rather than test the NBA waters. Today, Taylor’s at the forefront of a Smart philosophy that’s grounded on connecting with his players as people as well as point guards. “Coach Kipe is Coach Smart’s wing man,” Taylor said. Senior forward Connor Lammert said Kuiper’s “always thinking two steps ahead.”

On gamedays, he sits right behind where Smart stands and paces the sidelines. The other assistants follow their players’ performances. Kuiper’s studying something different. Like body language, who needs some encouragement, who could have his butt chewed.

Kuiper’s sort of a coach’s coach, if you will. He even wrote a book about it called “Know Yourself As A Coach,” a 157-page treatise on what makes players and coaches tick and how they should connect to improve mentally and emotionally. “I feel like I lived the book with him,” Crean said.

It may not be a John Grisham page-turner, but it should be must reading for every coach, young and old.

In it, Kuiper dispenses sage advice. Like not letting a loss define a coach, wisdom he wishes he’d taken himself when after one loss on a last-second shot, he got into his car and started driving, ending up 90 miles away at a Burger King in Flint, Mich.

Because of his ability to better connect and teach others how to do so, Texas is redefining itself as a selfless, cohesive team that has beaten three Top 10 opponents and positioned itself as a top five seed in the NCAA Tournament.

A lot of the credit goes to “Coach Kipe,” as everyone calls this humble, witty man who carries a 5 handicap in golf and loves a healthy political debate. Smart calls him “a great resource.”

Together they’ve come up with “mini-phrases” like “response” for putting an errant shot or bad game behind them and “stay in the moment.” As one teaching aid in big moments, a Texas coach will press his index finger on his thumb, then separate them to remind a player to inhale and exhale.

”With two minutes left in the game and the score tied, we want five guys with clear heads out there,” Kuiper said. “Not somebody who’s worried because he just missed a shot or he’s not playing that well.”

More often than not, Smart has gotten just that kind of team forgetful of failure. Telep has seen it firsthand.

“I love him, I really love him,” said Telep, a former prep recruiting analyst who now works as a scout for the San Antonio Spurs. “I love his mind. His ability to connect with different generations is amazing. He’s very much father-son with Shaka and part guidance counselor.

“Maybe the best way to put it,” Telep said, “is he is to Shaka Smart what Robert Duvall was to Michael Corleone in ‘The Godfather.’”

He may be Smart’s consigliere who is always looking out for the benefit of the program and the players.

“What Coach Smart told us was he was the team psychiatrist,” Felix said. “He may be the most important dude on our team. Usually people like that don’t get the recognition, but he definitely deserves it. He helps us not get bummed out when times are rough in life, school or basketball.”

You may not have seen Kuiper all season. You might have never heard of him. And most certainly you’ll never hear him take a smidgen of credit for Texas’ breakthrough year. Well, that’s not entirely true.

When first approached, I asked Kuiper if he was the brains of the operation.