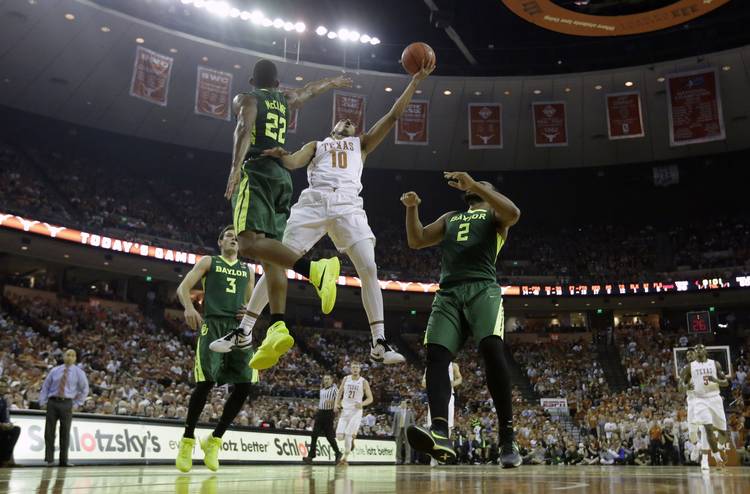 Texas lost to Baylor on Friday.

And that’s no typo.

Yes, the game was played on Saturday, and technically, the 25th-ranked, energized Bears completely undressed the 24th-rated Longhorns 78-64 before a sellout crowd at the Erwin Center in a game that was nowhere near that close. I’ve seen piñata bashings that weren’t this one-sided. As Baylor’s Taurean Prince said when asked to rate his team’s intensity on a 1-10 scale, “Uh, a 15.”

Shaka Smart’s team, not so much. It lost this one long before the opening tip.

The Longhorns, who have been really, really good and surprisingly good this season, came into this rematch with Baylor mentally unprepared, physically soft and emotionally overwhelmed. Or at least that’s how they looked, falling behind 40-22 at the half and never putting any pressure at all on the visitors.

They lost this because somewhere between the second consecutive win over Top 10 West Virginia on Tuesday and Saturday, the Longhorns weren’t focused or got a little full of themselves or didn’t practice hard enough or thought the Bears would fold up as they did in Waco.

Smart’s got to figure out which of those reasons fed into Texas’ worst game of the year. Plus, it’s difficult to beat any team in this league twice, and Baylor, at 5-2 in the Big 12, has more road victories than any other club, Kansas included.

But this game was decided long before 16,540 showed up at the Erwin Center.

Only the particulars of the box score remained to be filled out.

If you want details, know that Baylor forward Johnathan Motley had 24 points and is playing like a Wooden Award contender, Scott Drew’s 1-3-1 expanded zone shrank the Longhorns’ offense and destroyed their confidence, and the Bears all but pitched tents in the paint, scoring a whopping 50 points there. Nobody is going to want to play Baylor in March. The Bears are damn good.

But so are the Longhorns. At least, that’s the impression we have after watching them beat three Top 10 teams this season, including North Carolina, and five ranked teams. And we all know this was one game and Texas was due for a stinker.

To the credit of the Texas players, they owned it.

“We didn’t come out ready to play today,” said junior guard Isaiah Taylor, who credited Baylor. “I don’t think we responded good today. We need to come out with more fight and a sense of urgency.”

The players were accountable. They didn’t hide from it, didn’t shirk their responsibility and know they must have more mental resolve if they truly want to be the best team they can be.

Neither did Smart, who spent almost an hour in the locker room with his dejected team.

Are you mad, Smart was asked at the outset of the press conference.

But he wasn’t mad at his players. He was mad with them. That’s the true genius of a Shaka Smart. He gets it. His locker room is more Oprah than Jerry Springer.

It’s not Smart’s style to berate and bemoan in the locker room, and Texas had enough of that under Rick Barnes. But Smart wants honest dialogue, encourages give and take with his players to better understand their makeup and how to improve. After Saturday’s loss, the majority of the team spoke up and gave the staff opinions. A teaching moment, if you will.

But Smart didn’t buy into any supposition that his might be a mentally fragile team. He’s as genuine and rational and measured a head coach as I’ve been around in four decades, and he answers questions with a thoughtful, analytical style.

When asked if the 17-10 Longhorns were mentally fragile after being beaten down by losing in March and winning only a single NCAA Tournament game the past four seasons, Smart said, “That may be what you’d like to write, but I think words are insufficient to tell the whole story. Yeah, today we are fragile. But other games, we’ve had a terrific response. We’ve hung in there and battled.”

The best part about Saturday’s embarrassment? As tough as this league is, Texas has an immediate chance to redirect any negative momentum and apply it on an important road trip to dangerous Kansas State on Monday night.

Texas wasn’t going to win the Big 12 anyway. Kansas is because that’s what Kansas does. And Texas could falter in March because lately that’s what Texas has done, but I think this team is different and stronger than previous clubs.

To prove it, they’ll have to dig down deep and show some maturity and ticked-off-ness down the stretch with four more games, including home dates with Oklahoma and Kansas in the next nine days.

“This,” Smart said in summation, “is about our team deciding who we are. It’s a reminder to everyone, me included, that who we are is still to be determined. We’re still figuring that out.”

Golden: Morgan Cooper back in business after Tommy John surgery