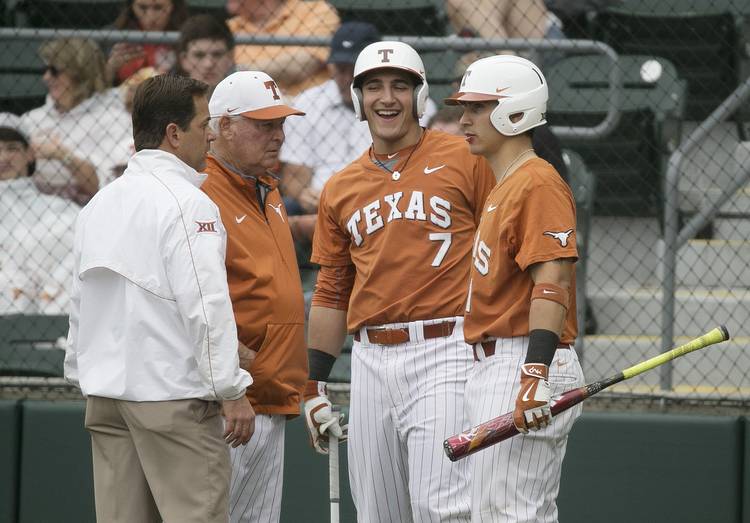 Texas Coach Augie Garrido, second from left, looks at Tres Barrera, far right, before he goes to bat after he was hit by a foul ball against UNLV on Sunday, February 21, 2016. Player Michael Cantu is second from right. DEBORAH CANNON / AMERICAN-STATESMAN

Those words put smiles on the faces of coaches and teammates alike after the redshirt sophomore right-hander returned to the mound for first time since the summer of 2014.

“It was amazing,” said outfielder Patrick Mathis. “I was in right field enjoying every second of it. That guy’s a monster.”

Cooper pitched two innings of no-hit, shutout ball, and the Horns left the first weekend of the 2016 season with visions of a deep pitching rotation dancing in their heads. It’s early and he’s still working his way back, but Cooper walked off the mound after the eighth inning resembling the same pitcher who posted a sparkling 2.89 earned run average in 29 appearances as a freshman.

That was two Novembers and countless rehab sessions ago. The last time we saw him in a Texas uniform was the last time we saw the Longhorns in a College World Series. Cooper pitched 4 2/3 innings in a season-ending loss to Vanderbilt but was confronted the following fall with three words no young pitcher wants to hear.

Some make it back. Others don’t.

The rest of Cooper’s story has yet to be written but the 6-foot-4, 220-pounder brought it in Sunday’s 7-0 win over UNLV. He thew each of his three pitches — fastball, curveball and change-up — for strikes with a pair of strikeouts and one walk over a 34-pitch effort. Most important, he felt no pain in his arm about 14 months after going under the knife.

The long sessions with strength and conditioning coaches Stephen Whalen and Michael West were admittedly a grind. Fall ball was a real mental adjustment. Nothing like the pain of breaking through scar tissue then being forced to sit a week and start over. The throwing program installed by pitching coach Skip Johnson was intended to build strength and push the envelope to help get him back to where he was once when he got here.

“When I was first getting back, it was really frustrating when you had to take a week off, regroup, take a step back and then work back up to it,” Cooper said.

The physical battles that are won and lost coming back from major elbow surgery can best be described by the pitchers who have gone through it, but it’s safe to say it’s far from easy. Cooper got a boost from all the folks pulling for him, but it would not have happened had he not pushed through the mental hurdles that come with such a surgery.

A sign above his locker that read “DON’T OVERDO IT” helped in the process.

Before the seventh inning, Cooper admitted to taking a little mental inventory in the bullpen before stepping to the mound in a real baseball game for the first time in 20 months.

“I looked down at the ground and kind of got the chills a little bit and thought, ‘It’s finally here,’ ” he said. “I’ve been waiting for this for so long. That moment right before was pretty intense, I guess, in my own head. Once I got on the rubber, I was ready to go.”

Keyon Allen was the first batter. He went down swinging. Then Justin Jones popped out to the catcher. Kyle Isbel then fanned on a fastball that reached 92 miles per hour on the gun. Cooper topped out at 94.

“He’s healthy,” said Texas coach Augie Garrido. “We’ve had other pitchers who have come back from Tommy John surgery, and they’re waiting to see if their arm is going to go out again. He has pitched with absolutely no fear.”

Garrido and Johnson have long maintained that stockpiling starting pitching is key to long postseason runs. A healthy Cooper would be my pick for the Friday night starter with lefty Ty Culbreth taking Saturday and Connor Mayes and Kyle Johnston battling for the Sunday spot.

Johnson said Cooper still has that bulldog mentality we witnessed his freshman year. After that long layoff, it’s easy to see that a fire is still burning in that kid’s belly. The next step is building up his innings to see how the arm responds to the rigors of a long college baseball season.

The opposition will get tougher as the season progresses but Cooper should fare well. He has already overcome one rather large obstacle.