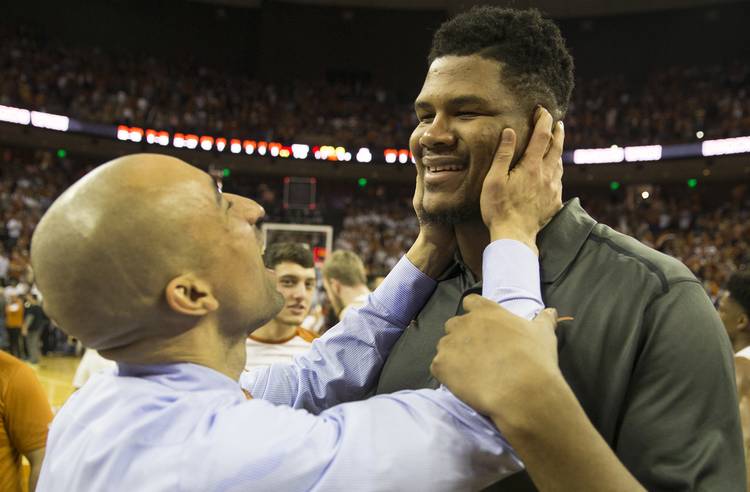 An hour or so after a titanic win over third-ranked Oklahoma on Saturday afternoon, Shaka Smart’s mind raced back to the 14-hour plane ride home from China in mid-November. Funny, it seemed longer.

Of course, Texas had just opened its season with a depressing, six-point loss to a very young Washington team that was picked to finish last in the Pac-12. Smart had gotten his first glimpse of his new team and couldn’t have been blamed if he was checking the small print in his signed Texas contract for loopholes.

It wasn’t just the fact that nobody not named Isaiah Taylor scored more than seven points in the game or that the Longhorns had hit just 2 of 15 3-point shots and missed 17 free throws. It was an ugly eyesore of a game in Mercedes-Benz Arena.

Beauty might be in the eye of the beholder, but so is the prospect of finding something beautiful.

“On the plane coming back from Shanghai, there was a lot of looking around,” recalled Smart, who had bigger concerns than not enough leg room. “I knew we’ve got a long, long, long way to go.”

That journey just got shortened.

For the fourth time this season, Smart’s remodeled team got the better of a Top 10 team, the most such wins by any NCAA club this year. That’s outstanding, and considering UT won three of those without best center Cam Ridley, Smart should be a lock for Big 12 coach of the year, with all due respect to Bill Self. It’s flat-out astonishing that Texas and OU are tied with 10-6 league marks.

For Texas to accomplish this and put itself in the running for maybe a No. 4 seed is nothing short of remarkable. Remember, Smart’s frontcourt is so unimposing offensively that Prince Ibeh and Shaq Cleare combined for just four points Saturday, although Ibeh had a solid game with 10 boards and two blocks.

Texas took down the Sooners and likely national Player of the Year Buddy Hield 76-63 with an impressive 22-0 run in front of a jampacked Erwin Center that was treated to fireworks, balloons, cookies and Texas’ best win of the year.

“Yeah, because it was today,” Smart cracked. “You’ve got to learn I’m a in-the-moment guy. They’ve kind of had our number.”

But this was a special moment. It was a milestone for Smart and Texas, which had been the Sooners’ personal whipping boy of late, having lost five in a row and two straight in Austin. Texas didn’t just beat OU. It jackhammered the Sooners into submission down the stretch, handing them their most lopsided loss of an otherwise spectacular 22-6 season.

It doesn’t take much imagination to consider that, barring a Hield trey at the buzzer in Norman, the Longhorns could have swept OU this year. The same team that bombed against Washington, got smoked by a terrific Texas A&M team in the Bahamas and looked lousy in a home loss to Baylor just seven days ago came within a hair of sweeping Top 10 teams OU and West Virginia. Oh, and Texas beat No. 3 North Carolina and No. 17 Iowa State as well.

Shaka Mania has arrived. And is here to stay.

The 38-year-old coach has gotten his message across so well that the players — four senior starters strong — have bought in, and so have objective, grizzled media and what appeared to be a skeptical but now adoring fan base. He owned it on Saturday when it was Texas this and Texas that. Smart’s feeling so welcome in his new digs that he even felt obliged to remind a bunch of UT students on video that OU, indeed, does suck, the Sooners’ impressive record notwithstanding.

“There’s so much potential here,” Smart said. “So many great things can happen here, not just in basketball. I’m a pretty positive, optimistic guy.”

Kansas, per usual, has the best team and clinched the conference for the umpteenth time, 12th in a row. OU has the best player in Mr. Hield, who topped 30 points for the ninth game with 33 points. But Texas had the better team on this day.

Hield’s so good he should claim two spots on the All-Big 12 team. But Texas got contributions from everyone. From Taylor’s 18 points and zero turnovers to Connor Lammert’s four treys and eight rebounds to freshman Kerwin Roach’s second-half defense (with help) on Hield, who was held to 10 points in the final 20 minutes.

“Buddy’s going to hit tough shots,” Roach said. “You’ve just got to make it as tough as you can on him. When Coach told us we had a 22-0 run, I looked at him like ‘Wow.’ But we’re a pretty good defensive team. We’re definitely capable of beating anybody.”

They’ve shown that already. Which is why there was no court-storming by the 16,540 raucous fans.

And will be again. You can book that.

Smart’s counting on it, too, but can still remember the Longhorns’ resolve back in November and Roach’s plea to assistant coach David Cason at the Shanghai airport to help him work overtime on his ball-handling. That was a long time back, and everyone’s now looking forward to March.

“We have one more game in February,” Smart reminded of the Kansas game Monday. “It’s leap year.”

And no one had a bigger leap of faith than Smart.