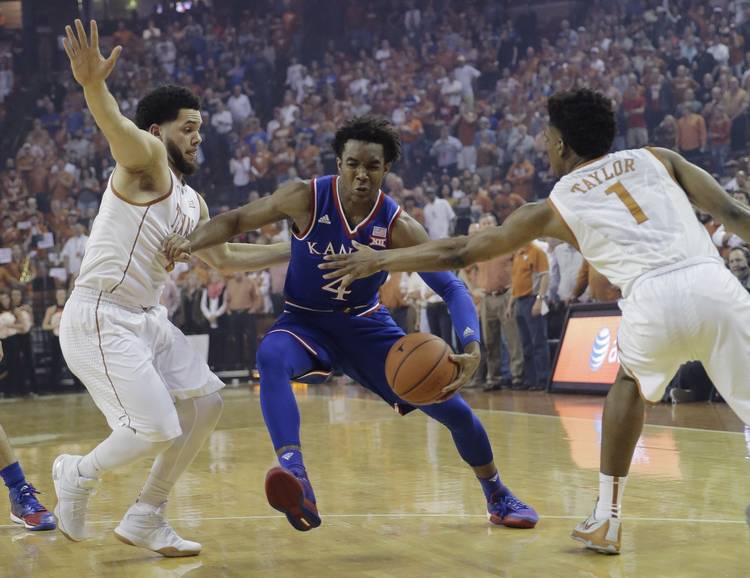 And not in the fun-loving Ashton Kutcher sense.

No, the Texas Longhorns were punked in the worst of way, humbled by a team they nearly beat on the road just five weeks ago.

Even if Texas had played well on Senior Night, there was no guarantee of the program’s first win over a team ranked atop the Associated Press poll.

The Longhorns didn’t come close to the level they displayed in that emotional beatdown of third-ranked Oklahoma just 48 hours earlier and the No. 1 Kansas Jayhawks were more than happy to lope to a very easy 86-56 win.

Of immediate concern to coach Shaka Smart is his team’s Jeckyll-Hyde act over the last three days: world beaters against the Sooners, beaten to a bloody pulp against the Jayhawks.

In his favor, he has a core group of experienced seniors and a junior point guard that should be able to mentally bounce back in the wake of Smart’s first blowout loss as head coach. But not in his favor is the unknown. Could this be a late-season slide that became oh-so familiar near the end of the Rick Barnes era or is it just a small blip?

Smart said he was concerned with how his team would come out for Kansas but no way he saw them falling behind 15-0 on 13 straight missed shots.  I asked him if he was worried about this malaise extending into Friday’s regular-season ender at Oklahoma State.

“There’s always concern for that,” he said. “We didn’t respond very well when we got down. This is a team that we’ve stressed and emphasized moving on to the next thing whatever that may be. Now we need that more than ever.”

It would be too easy to dismiss this loss as a product of being stuck in park after an emotional Senior Night ceremony but the problem is bigger than blinking through tears before the opening tipoff. It has to scare Smart witless to think about the prospect of his team stumbling into an NCAA Tournament game against what will be a quality opponent like it did against the Jayhawks.

Shoot, the Horns were scoreless and down two touchdowns and a field goal while people were still filing into Club Erwin. Perry Ellis, whom I could have sworn played on the 1988 KU national title team with Danny Manning, was too quick and too crafty for Prince Ibeh and the Kansas guards lit up a Texas defense that was lit up early on by Oklahoma’s Buddy Hield.

On the other end, Texas couldn’t throw it in the ocean. Gimpy point guard Isaiah Taylor had his worse game of the season and the Horns were systematically run off their home floor by a team that had no interest in waiting until the weekend to clinch the outright conference title. At one point, Taylor missed three shots from within 12 feet on one possession.

Shooting slumps come and go but the Horns just didn’t fare well in the bounce-back department. No counterpunch. No big shot to get the crowd back in it. No wins on loose ball. Not much, period.
Some might suggest you just throw away the film and wipe the slate clean but that’s not a fix in this case. Smart needs to examine what could have possibly happened post-OU-pre-KU to lead to such a disastrous start and such an embarrassing ending.

“In the past when we’ve had rough games, we’ve responded well,” said Connor Lammert. “We have to come in tomorrow and look at some things. We will come in with some energy and get this taste out of our mouths.”

Looking ahead, the Cowboys are 3-14 in the Big 12 but very capable of taking out Texas at home considering one of their wins was an 86-67 win over Kansas last month. Better Texas teams than this one have came back from Stillwater with an “L” to show for it.

So which Texas team will we see?

It’s the question that will keep Shaka up late over the next few nights.

Golden: Texas basketball dropped the ball on Monday, with little time to regroup