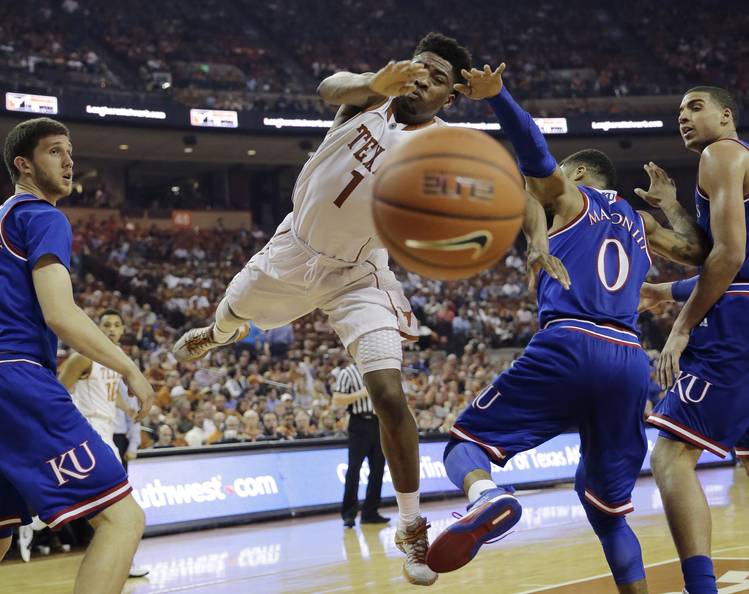 Texas guard Isaiah Taylor (1) looses control of the ball as he tries to drive past Kansas guard Frank Mason III (0) during the second half of an NCAA college basketball game, Monday, Feb. 29, 2016, in Austin, Texas. Kansas won 86-56. (AP Photo/Eric Gay)

It was 9:35 on Monday night, and Texas’ two  basketball teams looked anything but competitive.

At Club Erwin, the men trailed the top-ranked Kansas Jayhawks 67-37 on Big Monday. Two days after the pre-game balloons that fell from the rafters were followed by the much-celebrated fall of then-No. 3 Oklahoma, Texas went down with a whimper.

Meanwhile, up in Waco, the Texas women — who were playing for a share of the Big 12 title against one-loss Baylor — were down 60-30 at a sold-out Ferrell Center after briefly leading by two in the second quarter.

Two teams with twin 30-point deficits at the same moment, on the way to the two worst losses of each team’s season.

Not the best way to usher in March.

Texas coaches Shaka Smart, Karen Aston and women’s assistant Travis Mays have all enjoyed their share of past NCAA Tournament successes, but each knows so much needs to happen for their respective teams to turn Monday’s failures into future fortunes.

At the Erwin Center, where the men lost 86-56, I got the sense that Texas was beaten before the game ever started. They should have changed the pre-game hype song to “Welcome to the Bungle” because the Longhorns looked as if their home rims were from another planet. Smart’s custom is to not take off his jacket until Texas scores, so you can pretty much guess that things got decidedly warm under his collar when Texas missed its first 14 shots to fall behind 15-0.

On Tuesday, after watching the film twice — I’m surprised he didn’t burn it — Smart called out his team, suggesting that some of his players are already satisfied with how this season has progressed and perhaps not so invested in reaching for a higher level. He also talked about having guys on his Final Four team at VCU who were “killers.”

So, do you have any killers on this team, Shaka?

So you have part-time killers?

“It’s a makeup thing,” Smart said. “It’s something that you have inside of you, and I do think that competitiveness is a central trait among all the best teams and the best players. It’s one of those things where the best guys … they don’t turn it on and off. They just have it and we have to keep developing that.”

Smart understands that the “off” switch will add up to an early exit from the Big Dance, especially if big man Cam Ridley and his surgically repaired foot continue  to eschew a jersey and shorts in favor of nice suits on game nights, and if lead guard Isaiah Taylor continues to be hampered by plantar fasciitis in his right foot.

A win over Oklahoma State on Friday would do wonders for this group — a bye in the conference tournament, a 20-win season and the expulsion of that bitter KU aftertaste.

Over on the women’s side, Baylor showed by clinching its sixth straight Big 12 women’s title that there is still a gap in the country between the big dogs — UConn, Baylor, Notre Dame and South Carolina — and teams like 26-3 Texas, which has taken huge steps forward under Aston.

But is the gap between Texas and Baylor that large? Not if the first 15 minutes of Monday’s game was any indication. The Horns gave the Lady Bears all they could handle, but ran into the same wall that doomed them in another road blowout loss to Oklahoma. This time it was a scoreless drought of 6:05 that put the Horns down by double digits with no chance of getting back in it.

It was a classic illustration of a great program doing what it had to do against a good team that it just might meet again in the Big 12 tournament championship game. The Horns, who’ll be seeded second in Oklahoma City, are a team on the rise. But Texas must guard against a Baylor hangover this weekend. And be reminded, they just played for a conference title.

“That cannot be overlooked when you’re changing a culture and rebuilding a program that you want to be at a championship level,” Mays said. “If we didn’t have an opportunity to play for a conference championship, we would be having a different conversation.”

There are three big reasons why the Texas women are closer to making a deep tourney run  than the Texas men:

Mays believes Texas has just as much talent as Baylor, but that the difference is the Lady Bears have played at a high level over a period of time while Texas is figuring out how to deal with this current wave of success.

“We try to remind them how close they are,” said Mays, who starred on Texas’ 1990 Elite Eight team.  “The pieces are in place and the work has been put in. But it’s different between a coaching staff knowing and the players knowing.”

Belief still emanates from each program, and the goals are higher based on what we’ve witnessed over an entertaining regular season. Does that add up to a pair of Sweet 16 appearances or better?

Hopefully we’ll still be talking about Texas hoops in the present tense in three weeks.

Golden: After KU no-show, which Texas team will we see in Stillwater?

Bohls: For Clay Jennings, getting to Texas was better late than never