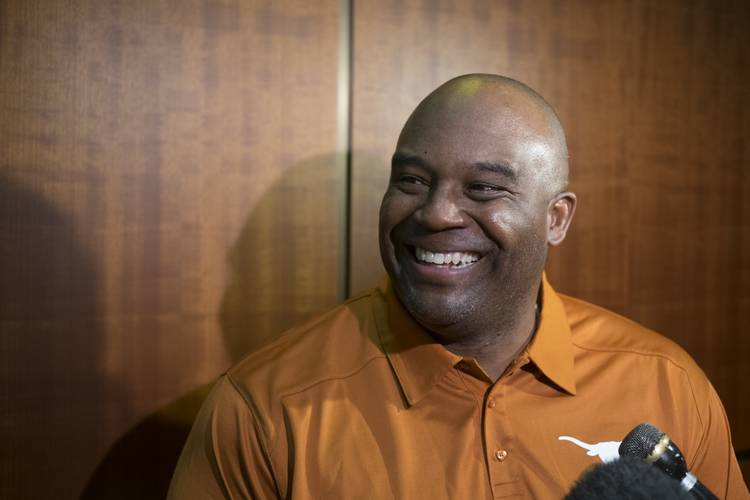 University of Texas assistant coach, Clay Jennings, defensive backs, speaks to the media after during a press conference held at the University of Texas in Austin, Texas, on Monday, Feb. 22, 2016. RODOLFO GONZALEZ / AUSTIN AMERICAN-STATESMAN

Clay Jennings has been in more places in the state of Texas than Whataburger.

He was born in Waco and played high school football there. Walked on at North Texas in Denton. Coached at Sam Houston State in Huntsville, and Baylor in Waco, and TCU in Fort Worth and at Houston.

Yes, he’s been in virtually every area code in the Lone Star State.

And it’s well worth the wait, says this large, gregarious man who has bided his time until he finally got an offer from the University of Texas. Not to play, but to coach.

So no offer from Texas as a high school senior?

“No, not at all,” joked Jennings, one of five new hires by head coach Charlie Strong as the Longhorns prep for spring drills starting Monday. “Baylor didn’t want me either. I only had one other offer to play football. That was to Trinity Valley Community College.”

The big defensive lineman started seven games as a true freshman for the Mean Green and once had three sacks against Alabama in 1995. But he wasn’t exactly a five-star recruit out of Waco La Vega.

“Oh, no,” he said with his barrel laugh, “I was paying people to come see me. If I had two stars, that’s stretching it.”

Jennings, however, doesn’t hold grudges, just memories of all his other stops that led this son of two lifelong Waco educators to Strong’s made-over staff. And now he’s trying to lure those five-star players to Austin although he missed out on Katy running back Kyle Porter and jokes he “lost out to Casper the ghost” because Strong hadn’t yet filled the running backs coaching vacancy.

You can count on Jennings being more than a little visible as an in-state recruiter.

While his path to Austin hasn’t been direct, he jumped at the chance to come even though he was becoming a respected fixture on Bret Bielema’s staff at rising Arkansas and Strong’s long-term future is iffy at best.

“I think you have to be able to believe in the vision,” Jennings said. “That’s what Coach Strong is building his program on. I don’t think the man upstairs would put me in a situation for me to coach out of fear. I think you take a leap of faith.”

“I think nothing about Texas is bad, in my opinion,” he said.

And how did that go over in Arkansas where the Razorbacks are openly hostile about all things Texas?

“I made sure I slept with one eye open,” he cracked.

Folks have had their eyes on Jennings for quite some time.

Jennings has built a solid reputation everywhere he’s been. Even though he was a defensive lineman, he has created a rep as a defensive back guru of sorts and could become the next Duane Akina here. He’s delivered 11 defensive backs to the NFL although that’s not how he figured his career would begin.

When he first decided upon coaching, he approached North Texas head coach Matt Simon about the idea. Simon agreed to make him a grad assistant for the final semester Jennings needed to complete his graduation.

“So I picked up my playbook and was headed to the defensive line room,” Jennings recalled, “and he said, ‘Not so fast. To be a successful coach, you have to learn something different and see how the back helps the front.”

He’s been coaching the back end ever since. Not that it was an instantaneous fit. It took him a while to understand all the nuances.

“The very first time I went out, I was scared,” he said. “It was kind of awkward. A lot of those guys were my teammates. When it was all said and done, I got a better appreciation for the position and defense in general. Between the secondary and defensive line, they have to be best friends.”

Jennings has built a solid reputation everywhere he’s been.

During his six seasons at TCU, the Horned Frogs had 10 all-conference selections at cornerback, including Jason Verrett, a three-star player that came to Fort Worth after being recruited by only Boise State and San Jose State.

The maturation wasn’t immediate. In his debut at Baylor in the 2011 season opener, Verrett was torched by Robert Griffin III.

“Jason was just about ready to give up football,” a TCU source said. “He was really down after the embarrassment of that game when he was beat repeatedly. Clay worked with him, and Jason became arguably the nation’s best cover corner.”

Jennings helped develop Verrett into a two-time All-American as well as a first-round pick and a Pro Bowler with the San Diego Chargers. Bielema lured Jennings to Arkansas for career advancement.

“Coach Bielema is a heckuva recruiter,” Jennings said. “He told me if I had aspirations of being a (defensive) coordinator, I’d have the chance to coach all four (backfield) spots position-wise. Nobody’s pointing fingers at the other room, and you get a high level of accountability.”

Jennings is all about accountability.

Longhorns defensive coordinator Vance Bedford didn’t know Jennings, but Jennings knew of Bedford. He even had a video of Bedford during Bedford’s days as a Chicago Bear.

“He makes me feel old and outdated,” Bedford said. “But Clay came highly recommended. Everything we’ve seen in meetings, he’s a very sharp guy. I’m really impressed with him.”

How could he not? Jennings arrives here with a sense of humor as well as a sense of urgency. He’ll need both.

Golden: Texas basketball dropped the ball on Monday, with little time to regroup

Golden: Ten reasons why this is Charlie Strong’s most important spring