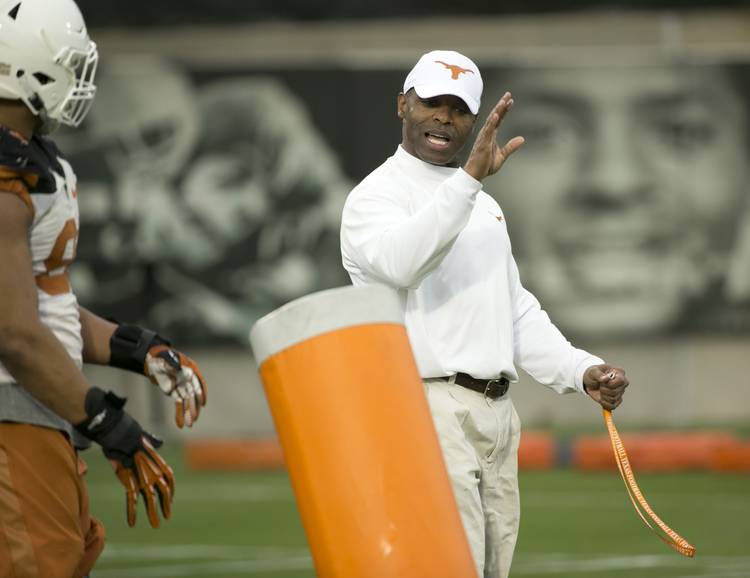 Spring football for Texas is here and with it more questions than at your average, mud-slinging presidential candidate debate.

The answers need to be forthcoming before the spring game concludes on April 16.

Charlie Strong’s future — and his current address — rely on it.

Strong’s on the hot seat. Really, really hot. He’s acknowledged as much nationally and in Monday’s press conference before the first of 15 practices.

Charlie’s not ignoring the heat. He’s embracing it. That’s good, because there will be plenty of it. Texas’ strength of schedule is ranked 26th most difficult and includes five opponents who finished last year ranked in the Top 25 and nine bowl teams, four of which won their post-season games.

And Strong needs to confront it head-on because Red McCombs won’t be the only Texas power broker looking for a change if there’s a third consecutive losing season.

“Most people are willing to give the new offense a chance,” said one Longhorns big hitter. “Part of (the decision) will be how he loses the ones he loses.”

As in, Strong may not be able to endure any more blowout losses like the ones to Notre Dame, TCU and — gulp — Iowa State.

Starting his third year, he said, “This is a critical year for us. There’s a standard here and we need to meet that standard.”

Does the standard suggest 10 wins, 11 wins? It would if Mack Brown were still here. But we’re grading on a curve here. After back-to-back losing seasons, Strong almost definitely needs to win seven to qualify for a bowl game and show tangible, real progress. Eight would be so much better. Nine, and we’re polishing Strong’s coach of the year award.

That’s especially true, given the fact Strong has no idea who his starting quarterback is, whom that quarterback will throw passes to beyond John Burt and who will line up on a suspect defensive front. Strong rightly listed those three areas as the ones most needing upgrades.

But the turnaround of the football team starts where every team starts: “This team is going to go as the quarterback goes,” Strong said.

Will the Longhorns have an efficient offense under new coordinator Sterlin Gilbert that keeps them in games in the wild, wild Big 12 after finishing last in passing last season?

Will Texas find a legitimate, winning quarterback for the first time since Colt McCoy in 2009?

All of these impact the other, but none as much than quarterback.

After all, the LA police allegedly found O.J.’s knife quicker than Texas has a quarterback. What’s interesting is that Strong bluntly said he wouldn’t be opposed to starting a true freshman under center. Or behind center in Gilbert’s new-fangled, up-tempo offense.

Strong boldly said he’d run early-enrollee rookie Shane Buechele out on the field against Notre Dame in the opener if “we feel like he can take us where we need to go, we could play a true freshman at quarterback.”

Strong did say senior-to-be Tyrone Swoopes would take the first practice snap because that’s how the season finished. But by default, because redshirt junior Jerrod Heard was hurt and barely played against Baylor.

Trouble is we’ve seen this act before. Swoopes was outstanding at times in his short-yardage package, but he’s 6-8 as a starter, which won’t exactly inspire confidence. Heard flashed early against Rice and then was an offensive showman in the Cal game, but he regressed, couldn’t read defenses and finished the year as a question mark. Heard’s little better as a starter, at 5-5.

The schedule, as we know, is not exactly friendly. If Mike Perrin truly wanted to support Strong, he should buy out the road game at Cal and replace it with, say, Trump University. Yes, I realize TU is not a Power 5 conference, and I’m sure Aggies everywhere would make as much fun of that TU as the other TU they love to hate.

So what realistically can Charlie achieve in just 15 days?

He needs to find his quarterback in March, not August, and let the team gradually coalesce around that player’s skills and leadership qualities for months, not days. We all remember the renewed faith in Swoopes all last offseason only to see him jettisoned in favor of Heard after one game.

To his credit, Strong said he thought the staff would know “fairly quickly” who would emerge as the starter. I find that hard to believe, considering how few live bullets that player will face. But let’s hope he’s right.

There is no greater sense of urgency than the time between Monday and that opener against the Irish. Strong recognizes that and said as much. After all, a recent ESPN survey revealed Texas is the third most desirable job in the country among the Power 5 conferences, behind only Alabama and Ohio State.

Win big, Charlie, and the desirability only goes up. Have a losing season, and the seat will be just as hot for the next guy sitting in it.

Bohls: Smart’s Longhorns bow out of the Big 12 tourney with no momentum