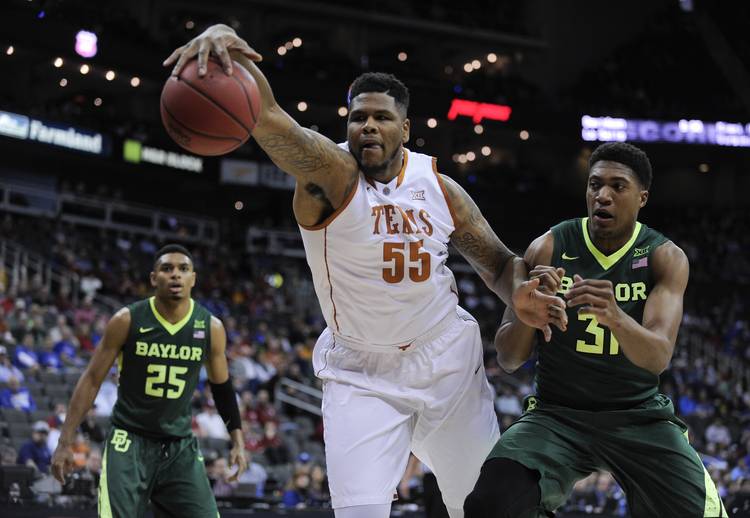 Cameron Ridley #55 of the Texas Longhorns reaches out as he tries to gain control of the ball against Terry Maston #31 of the Baylor Bears in the first half during the quarterfinals of the Big 12 Basketball Tournament at Sprint Center on March 10, 2016 in Kansas City, Missouri. (Photo by Ed Zurga/Getty Images)

Texas won’t have to play Baylor again any time soon. Or any other Big 12 team, for that matter.

That’s the reward for bowing out of the league’s basketball tournament almost before it began with a convincing, 75-61 quarterfinals loss to the really good Bears at the Sprint Center on Thursday.

So is the maddening March malaise of Texas basketball upon us? Quite possible.

The Longhorns know March fades all too well, having failed to reach the Sweet 16 in all but one season since 2006. Texas showed no signs of interrupting that post-season drudgery Thursday with an ill-timed performance that sends out rampant shudders that this team peaked in February. That might work if you’re a Winter Olympian or an ice fisherman, but if you’re a college basketball team, not so much.

Despite a terrific regular season and promising future, the Longhorns fell behind by double digits early, got seriously out-rebounded by an unconscionable margin of 19 and withered under Baylor’s extended zone.

Never mind that coach Shaka Smart pronounced afterward that he thinks his team “is capable of doing some damage in the NCAA Tournament.” Sure, it’s possible. Texas still has an electric point guard, a thriving stretch four in Connor Lammert and a rapidly improving Shaq Cleare and Kerwin Roach.

But nothing in the program’s recent history would suggest an instant turnaround. Plus, there’s that nagging 4-5 record in the last nine games, which includes two beatdowns by Baylor and an embarrassing home debacle against Kansas.

“You’d love to have great momentum going into the tournament,” Smart said, “but I don’t think that necessarily dictates that you don’t have a chance to win. It’s about having a hard edge and having a level of aggressiveness and connectivity as a team.”

The players were down in the dumps. When Demarcus Holland was asked for Smart’s message to the team, the senior guard didn’t mince words.

“That we were basically hypocrites,” Holland said in a stunning condemnation of a 20-12 team that finished fourth in the nation’s best basketball conference. “We didn’t follow through with what we said.”

That assessment’s a bit harsh, but so are the realities surrounding this team, few of which will inspire belief in a long run in the NCAA Tournament where Thursday’s premature exit probably cost Texas a seeding spot, leaving the Horns as a 5 or a 6.

Center Cam Ridley’s probably out or has very limited effectiveness. He played but two minutes, said he felt pain in his left foot at halftime and had a time restriction of only five minutes tops.

Sensational point guard Isaiah Taylor is not at full strength. His plantar fasciitis limits his explosiveness, and any NCAA opponent will focus its defense on keeping him out of the lane as priorities No. 1, 2 and 3. Maybe 4, too.

Shooting guard Javan Felix is in a shooting slump. Even though Felix himself disputed it, Smart said there’s “no question about it.” The senior who hit the game-winner against North Carolina and has hit four treys or more in three games this year went scoreless for only the second time all season and has sunk just four triples in 22 attempts in his last nine games.

While a terrific shot-blocker and shot-alterer, Prince Ibeh’s no offensive player. He had eight points and missed four free throws, four of Texas’ nine misses at the line against Baylor.

Texas missed double-digit layups and has missed at least seven free throws in 16 games this year. Ibeh’s a 42 percent shooter at the line.

“Our guys, most of ’em, feel like they’re caught up in somewhat of a vicious cycle,” Smart said. “They really want to win and they want to do well, but then some things don’t go our way and they get a little down, and that clouds our minds a little bit.”

Texas’ second loss in three games with Baylor unmasked all of its shortcomings. While the Bears’ dynamic Taurean Prince (24 points) can get his shot any time he wants, even against double teams, the Longhorns have no such weapon. Taylor remains an outstanding passer — he had nine assists to only one turnover — and is a great penetrator, but defenses cluster around him, and Smart doesn’t have reliable enough perimeter shooters to make teams pay for their attention on Taylor.

That doesn’t mean Texas can’t win next week and even get to the second weekend. Any team that upsets the Tar Heels, sweeps West Virginia and claims wins over one-time No. 1 Oklahoma, Iowa State and, yes, Baylor, is capable of catching fire in the NCAAs.

As Smart pointed out, “there’s been games where we didn’t play well where we had quote-unquote momentum,” so it’s a fruitless exercise to predict the future with any degree of exactitude.

What he does know is that the Longhorns must play appreciably better. And fast.

Bohls: Best way for Charlie Strong to get off the hot seat? Find his quarterback, finally

Golden: Will new Texas offense be on pace to pile up points?