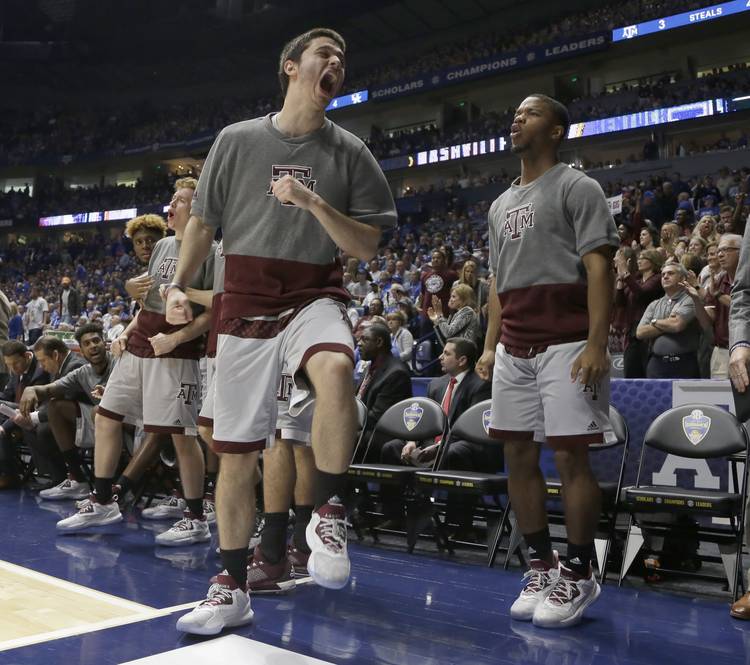 Texas A&M players reacts to a play during the second half of an NCAA college basketball game against Kentucky in the championship of the Southeastern Conference tournament in Nashville, Tenn., Sunday, March 13, 2016. (AP Photo/Mark Humphrey)

After the teams in the West Region were revealed, including his Texas Longhorns, Shaka Smart cautioned his team against distractions.

For those who aren’t into the term, distractions are those little pieces of information that just might take your focus off the task at hand and lead to failure.

Give it to the NCAA Selection Committee. Those folks have a way of bringing out the best in a bracket. To think about Texas’ potential second game on opening weekend in Oklahoma City is to think Hatfields vs. McCoys, Republicans vs. Democrats.

The Texas-Northern Iowa matchup does matter, so let’s address it before we get to the possibility of a grudge match against the Texas A&M Aggies.

The Fighting Kurt Warners actually made it to the Sweet 16 last season, something that hasn’t happened around these parts since 2008. They are a slow-it-down, grind-it-out type of team that will give up the size advantage to the Horns, but they have a point guard in Wes Washpun, who went for 27 points a couple of years ago in a double-overtime loss to Shaka’s VCU team.

Despite having three players who are least 6-7 and one who is 6-11, UNI doesn’t have a player that averages five rebounds per game, so you’re looking at a classic matchup of a good big team — assuming Cam Ridley is back, healthy and ready to roll —  against a good perimeter team.

You know Texas A&M has some big guys too. Sorry, I couldn’t help it.

Sorry, Shaka, but I have to get this one out of the way.

The No. 6-seeded Longhorns vs. the No. 3 Aggies with a spot in the Sweet 16 on the line on Sunday afternoon? That’s nearly as exciting as lining up six lotto numbers on Saturday night, finding out they’re not taking any taxes out, then living for another 50 years without any of your greedy relatives finding out you won.

Talk about a money matchup.

OK, it’s not a Thanksgiving weekend matchup at Kyle or DKR, but what better way to whet the appetites of those who still remember the hate-filled rivalry that was A&M-Texas than a meeting in the area that houses the one school that carries a nice amount of hatred for both schools. Oh yeah, the committee stuck Oklahoma in the same gym this weekend. Priceless.

Shaka’s not talking the Aggies because it’s not what coaches do. They aren’t the look-ahead types. It’s what can you get them beat. Smart understands that the Horns, who haven’t won three straight games in over a month, must pick it up or pack it up. They haven’t really wowed out since they beat Player of the Year Buddy Hield and Oklahoma a couple of weeks ago.

So it’s Northern Iowa all the time.

“I told the guys a lot of people would be talking about that potential matchup, but it’s not something we will focus on at all,” he said. “The rules of the NCAA Tourney dictate you better win the game that’s upon you. Otherwise you will go home.”

Shaka may not be speaking on it, but the power of pen allows me to crank up the hype machine and red-line it when needed. This would be one of those times. There’s no way the Aggies and Longhorns ended up in the same part of a 68-team field by chance. Even Ridley can smell what’s cooking with the West setup.

“It might have been on purpose,” he said. “At the end of the day, all of this stuff is probably over money. A lot of people see Texas and Texas A&M right beside each other, so that’s the matchup they want to see.”

Spoken like someone who truly understands the meaning of television ratings and ticket sales.

Shaka does deserve credit for getting his message across, because his players weren’t too interested in anything Aggie related. Not even the 84-73 loss to A&M in the Bahamas.

“I don’t really remember much about that game,” said guard Javan Felix. “I think we had a lot of guys in foul trouble.”

What about you, Demarcus Holland? What do you remember?

Friday’s 8:50 tipoff against the Northern Iowa Panthers is all that matters.

Golden: Will new Texas offense be on pace to pile up points?