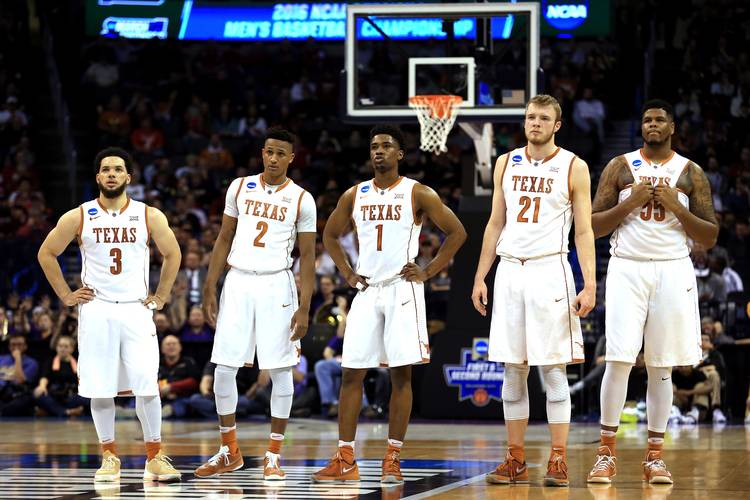 OKLAHOMA CITY — It went in.

There’s no other way around it.

Paul Jesperson’s half-court heave ended Texas’ season and the college careers of a senior class that laid the groundwork for great things to come under Shaka Smart.

“They’ve grown up in a lot of ways late in their careers here and hopefully they set a good example for our younger guys,” Smart said. “They’ve sacrificed in different ways, and that’s something that any program, if you want to be the best you can be, is going to need.”

The 2016 basketball season didn’t have to end this way for the Texas Longhorns.

The NCAA Tournament is the only American sporting event that has never disappointed us. Buzzer beaters are part of its allure. One team celebrates while another leaves the floor in utter disbelief.

The shot was much less believable than most tourney buzzer beats we’ve witnessed.

BYU’s Danny Ainge went coast-to-coast against Notre Dame in 1981, but that was a layup. UConn’s Tate George hit a turnaround jumper to beat Clemson in 1990, but it was a relatively short shot. Christian’s Laettner’s turnaround jumper that beat Kentucky in 1992 came from the free throw line. That’s just 15 feet away.

UCLA’s Tyus Edney drove the length of the court for a layup to beat Missouri in 1995. It was difficult, but it was a layup. Bryce Drew’s shot against Mississippi State in 1998 in this same city was a desperation shot, but it was well past midcourt, near the three-point line.

Jesperson’s shot Friday night was so much different. It was a lightning strike. A prayer. A knife in the gut from an assailant wearing a blindfold.

The walk through the Texas locker room felt like paying your respects to the relatives of the dearly departed at a wake.

I’ve been around Connor Lammert, Prince Ibeh and Javan Felix for years, and each had one thing in common besides age — a toughness that trickled down to their younger teammates.

I saw warriors’ tears from those three as midnight came and went. The clock ran out on Texas, but lessons were learned that will benefit future teams under Smart. This class can hold on to that, though the manner in which their careers ended will long play over and over in the inner reaches of their souls.

It was a crusher.

“It just sucks for my career to end at Texas on a half-court shot,” Felix said. “That’s the biggest thing that’s killing me right now. As a team we played great. We fought. We did everything we could do … They just made one more shot than us.”

Looking over the season, the seniors grew exponentially in the leadership department. The group that spearheaded a rally from a 23-2 run that pushed them to the brink of elimination by humiliation wasn’t the same crew that blamed Rick Barnes’ coaching staff for a general lack of success in their careers. They leave with a sense of ownership and accountability for both their successes and failures. That, friends, is called maturation.

This wasn’t the Connor Lammert who would defer to his teammates if he missed a shot or two. Lamm continued to take shots even if it was in his nature to not want to shoot it too much. He missed a three-pointer that would have given the Horns the lead with under three minutes left, but came back to hit a difficult leaner to tie it.

Prince Ibeh played one of the most impactful games of his career. When he was in the game, the Horns thrived. The stats say Texas was plus-12 in point differential. When he sat, the Panthers, particularly guard Wes Washpun, drove the lane unencumbered. Ibeh’s lone mistake was allowing Klint Carlson to go past him for a layup with 26 seconds left, but Texas would have been long dead had it not been for its center who had to adjust to a new role in Cam Ridley’s absence.

Ridley was a top-five center in America before he broke his foot. He came back for this tournament, but it wasn’t the Cam that was a terror on both ends of the court up until that fateful day at practice leading up to Christmas.

Felix was the mental backbone of this club. While Isaiah Taylor got more pub because of his immense talent, I always went to Felix for the truth because he always gave honest answers, even when he wasn’t playing his best ball. Felix played with this rock-like belief in himself that stood taller than his 5-9 frame. The player whom UNC coach Roy Williams compared to an old dude with skills at the YMCA is a perfect example that game is much more than height and vertical leap. It’s about heart, and Felix has truckloads of it.

Demarcus Holland didn’t have the senior year he had envisioned, and part of it had to do with some tough breaks off the court. To his credit, he kept Texas in the game early with his hustle and his willingness to go in among the trees and fight for rebounds. He was perhaps the most composed of the Longhorns in the locker room, not that he hurt less, but just on outward appearance, he had it together.

“I know the younger guys learned a lot from this year and I know they will teach the newcomers that (are) coming in next year about the way Coach Smart does things,” he said. “I know we’ve got a great staff and they will build great bonds and great connections. I feel the program is going uphill right now.”

To a man, each senior related that Smart had told them he loved them. The program is in good hands because the right coach is on the bench. Help is coming and brighter days lie ahead.

“We set a good culture for years to come, especially under the new era with Coach Smart,” Felix said. “He’s done an unbelievable job and now he has that foundation. And it started with us.”

Golden: If Texas is going to make a run, which freshman will soar?