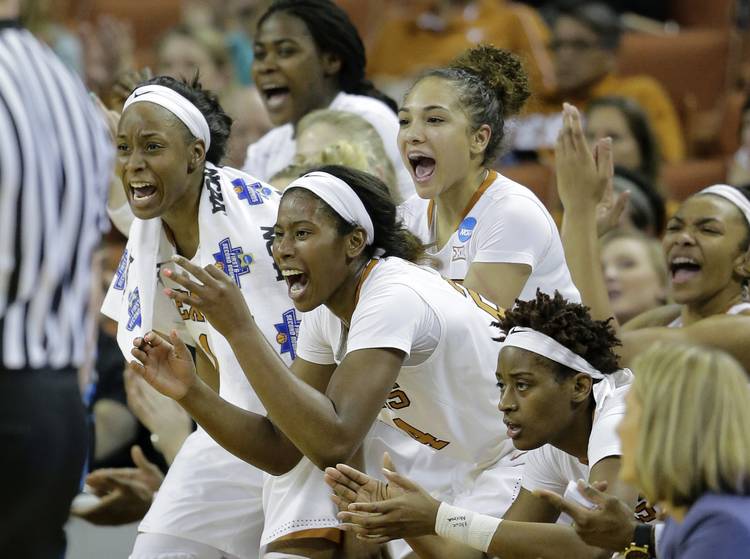 This was a check-list game for Texas. Much like a daily routine.

You know. Check it off. Wake up. Let the dog out. Brush your teeth. Shower. Rinse, repeat.

And in the case of Texas’ first-round NCAA Tournament game against overmatched Alabama State, it was every bit that mundane. There was a heckuva lot of rinsing and repeating.

Except the basketball laundry list read: Show up. Tuck in your shirttail. Empty the bench. (Maybe empty it a little too soon, like in the first quarter.) Celebrate a lopsided win. Advance.

It wasn’t quite that simple, and especially after Texas slopped through the second quarter after jumping to a 17-4 lead. But the Longhorns recovered quite nicely and closed it out in style, crushing the Lady Hornets 86-42 in front of a very sparse crowd of 2,645 at the Erwin Center on Saturday night. This was a supposed-to game as in a 2 seed is supposed to win by 40.

The Longhorns took care of business, but they were hardly tested. Not even remotely. And this was nothing more than a dress rehearsal for a Monday night game that could actually be the real thing.

Tenth-seeded Missouri, which knocked off seventh seed Brigham Young 78-69 in the early game and looked nothing like the last at-large team to get an NCAA bid this year, could prove to be more than a little challenging.

The Tigers are no pushover, so the heavy lifting may begin against them. Much like Texas, Missouri offers a lot of depth and scoring balance. And the Tigers shoot free throws very well, sinking 23 of 28 against BYU.

It’s not a stretch to think this second-round game could come down to Texas’ little guards — for instance, 5-foot-4 Brooke McCarty’s heart might even be bigger than she is — against Missouri’s big guards. Strength against strength. And every Tigers starter is 6-foot or taller, including 6-1 Sophie Cunningham, the SEC Freshman of the Year who was posting up BYU’s undersize guards repeatedly.

Aston will have to be creative in slowing her down as well as forward Jordan Frericks inside. But Aston’s guards were sensational Saturday. Senior Empress Davenport set the tone early, and she, Ariel Atkins, McCarty and Lashann Higgs all scored in double figures and kept up the pressure on the visitors.

They were so wired to start tournament play that Karen Aston feared they might kill each other. She cut short a Friday workout and also Saturday’s shoot-around so they wouldn’t leave it all on the practice court. As Davenport said, “Everybody’s intensity was very high.”

“I really thought guard play really killed us,” Freda Freeman-Jackson said. “They came at us in waves.”

According to her, the Longhorns will keep coming. And soon.

She was so impressed by Texas’ depth and balance, not to mention the imposing 6-7 Imani Boyette inside, that she was predicting big things for Aston’s 29-4 team.

“It’s going to be tough for teams to just beat them,” she said. “They’d have to beat themselves. But I think they stack up with the best of them. If they continue to work, I think they are going to eventually be right there to win a national championship.”

Aston liked the sound of that. But that prediction might be a tad premature.

That’s exactly what she’s striving for. Not respect inside the Big 12 or out. But a real title, and she thinks she knows how to get there, but if Texas gets by Missouri, it could face a No. 3 UCLA and the No. 1 superbully, UConn, in the Huskies’ own backyard.

“We’re getting close, we’re getting there,” Aston said. “I don’t know if we’re quite there, but we’re not going anywhere.”

The best Big 12 team not named Baylor came out with the intensity and passion one would expect from a program that’s desperately trying to re-establish itself as elite. But until they can get out from under Baylor’s thumb and do some real damage in March, Texas will continue to play its waiting game.

More reinforcements are on the way. For the second straight year, Aston has signed a top six national recruiting class. Even though Boyette will be gone next season, four new top players will be here.

But you can’t keep relying on the cavalry to arrive. Eventually a team has to do it now.

“We do have this one little step of mentality and a way of playing that we have to take,” Aston said. “But I’m excited about this team. I don’t think we’re through. I’ll go ahead and say it. If we were to fall short somewhere along the way before the Final Four, this particular team would be disappointed. So I don’t want to sell them short in what they believe in themselves.”

Nor should she. Eventually, Aston wants winning big to become the routine. Rinse, repeat.

Bohls: Now all Jordan Spieth needs to do is, well, do it again