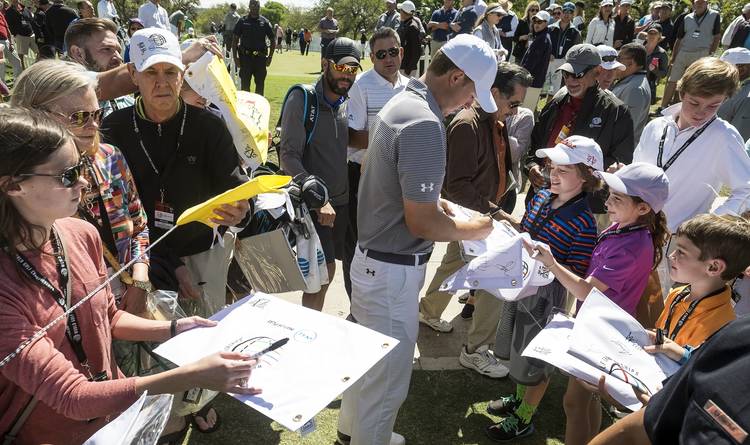 Cody Gribble is focused on having success on the Web.com Tour, but he admits he has another job.

It’s up to him and his other former teammates from Texas’ 2012 national championship team to keep Jordan Spieth grounded. Not that it takes all that much, given Spieth seems to have majored in humility at Texas.

“I’ll give him a bunch of (grief),” Gribble cracked. “We used to call him ‘The Golden Boy.’ I don’t think he likes it very much. He’s very secure with himself, for good reason, but he’s the best person in the world. We’ve got to keep him grounded.”

That’s not likely to be a problem although Spieth will get a hero’s welcome this week at the World Golf Championships-Dell Match Play as the favored son. He played the Austin Country Club course once and sometimes twice a week during his 1 1/2 years at Texas.

Expectations have gone through the roof for Spieth, golf’s 22-year-old superstar who has rocketed to No. 1 in the world. Of course, Spieth’s still chapped he didn’t win the Masters the year before he won it in 2015.

“He’s going to win the Masters again. I’m certain of it,” Gribble said. “And I bet he wins the U.S. Open again. He’s so mentally tough, it’s to a point it’s almost arrogant, but in a completely good way. You’re in complete shock when he loses.”

Spieth has had a ton of decisions since he donned the green jacket in Augusta last April. Which tournaments to play. What endorsements to take. Spoon or fork for his mac and cheese.

Spieth’s world has expanded exponentially since his phenomenal 2015 season that included two major championships, a No. 1 ranking, a FedEx Cup title and, oh yeah, $22 million in earnings and bonuses.

Now he has to grapple with all that comes with it.

He’s engaged in conversation with Stephen Colbert on the “The Late Show,” exchanged high fives with Steph Curry and visited after a Mavericks’ NBA game, shot a funny commercial for ESPN and had a talk with fellow Under Armour client Tom Brady, who knows a thing or two about celebrity.

“He’s obviously in the spotlight, being arguably the greatest — one of the greatest quarterbacks of all times, if not the best,” Spieth said. “So it’s pretty cool just to have that opportunity to talk to him. And he’s been helpful.”

Spieth wasn’t exactly in a cocoon before. After all, he joined Tiger Woods as the only player to ever win multiple U.S. Junior Amateur titles, so his coming-out party came long before he arrived at Augusta National and finished the year with two firsts, a tie for fourth and a second in the majors. For his 16 championship rounds, he was a staggering 54-under par.

“It’s not like that just came up this year,” Spieth said of the attention. “We were in the spotlight before. I played golf before 2015 that I don’t think a lot of people realized.”

“That was one of the great years to ever happen in the history of golf,” said Ben Crenshaw, a two-time Masters winner. “Ben Hogan (at 40) won three majors in 1953 and couldn’t play in the PGA (because of the overlapping schedule). Very few people have a realistic shot of winning the Grand Slam. To sustain the golf he played all year … how he handled himself is remarkable. He just has a knack for playing.”

Now all Spieth has to do is do it again. Phil Mickelson calls it “challenging, but in the end, he’s got such great skill that usually that will come forth.”

Repeating incredible success can be the most difficult thing in sports. The landscape is littered with one-hit wonders like Buster Douglases and Timmy Smiths who streaked across the sports world before retreating rather than repeating. Even Tim Tebow, erstwhile NFL quarterback for a playoff minute. Jeremy Linsanity became sane pretty quickly. Remember Mark “The Bird” Fidrych?

With Spieth, there’s no such worry. He has greatness about him. Never mind that he’s won only once this calendar year after going into last year’s Masters with a win and two runner-ups in his three previous starts.

Jason Day, No. 2 in the world, expressed very mild concern about Spieth’s busy schedule that sent him all over the world from Singapore to Abu Dhabi.

“I said I was worried about him, and I really am,” said Day, the PGA champion who won last week’s Arnold Palmer Invitational. “I just don’t want him to be burned out because he is so much a big part of the game. He’s a young kid that is a dominant player in the game. He’s important to golf.”

For his part, Spieth said he had no regrets about his international travel. His focus seems intact and as intense as ever.

“The Grand Slam’s just another carrot in front of his head,” Gribble said. “He wins, and he wants more. He’s by far the best player in the world, hands down, and I’ll be shocked if he doesn’t complete the Grand Slam by the end of his career. He isn’t even in his prime yet. He’s a once-every-50 years kind of player.”

Now he’s trying to show he’s that kind of play every year.