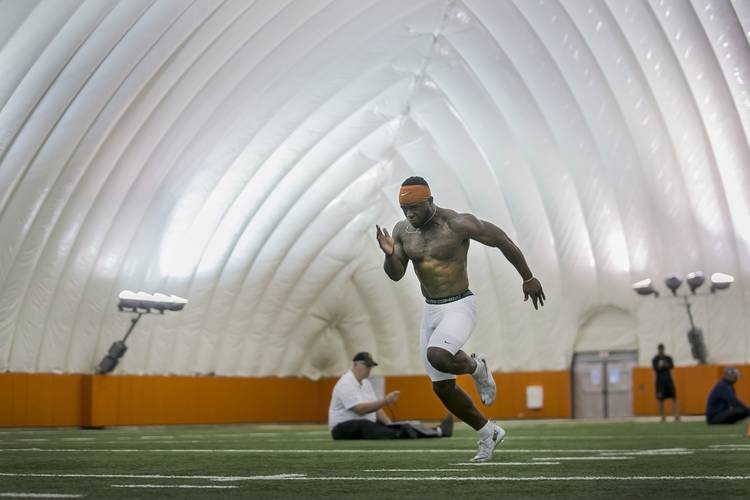 Daje Johnson for NFL scouts as he makes his way through drills during NFL Pro day at the University of Texas on Wednesday, March 23, 2016. RICARDO B. BRAZZIELL/AMERICAN-STATESMAN

The biggest story surrounding Daje Johnson last season was the making of a rap record.

If he wants a career in the NFL, he had better come up with some new material.

Glimpses were all we got out of Johnson over four head-scratching seasons at Texas. A momentary burst of brilliance here, a freakish display of athleticism there. But never anything long enough to make anyone believe he could do it on a consistent basis. Texas fans, and some of us in the media, came to accept him as a flash that would never illuminate permanent, blinding light on a college football field.

Say what you will about all the mini minefields that defined Johnson’s time here, his story hasn’t yet reached its conclusion. He still has a ticket that just might get him past the velvet rope of the NFL and on flat screens across the country on Sundays.

The ticket is speed.

Johnson clocked an unofficial 4.39 seconds in the 40-yard dash at Wednesday’s pro timing day, then backed it up with a 38-inch vertical leap and a 10-9 broad jump. He did injure his hamstring during another 40 sprint, but had already done enough to remind the scouts of something they should already know: He has the type of athleticism that can benefit an NFL team if it’s properly harnessed.

Johnson said he helped his NFL stock with the workout — the stopwatch doesn’t lie — but acknowledged that he didn’t reach his potential at Texas, a college career that was bogged down by a lack of discipline on and off the field.

So what would you have these NFL teams know about you, Daje?

“I’m a hard worker and will come to the team and give it my all,” Johnson said. “I will also try to lead the team as well, because I’ve grown up from the past to now. I’ve learned what it takes to make it and to put yourself in good positions.”

Those are the right words. Actions? Remains to be seen.

You already know that Johnson’s issues have nothing to do with athleticism. He’s undersized at 5-10, 178 pounds but the league is filled with small guys like Darren Sproles, Antonio Brown and his former teammate Quandre Diggs, who are big contributors on their teams. But the biggest question, outside of concerns about his durability, is the same one that’s always accompanied any conversation about him: Will he ever figure it out upstairs?

From first glance, Johnson reminded many of us of Ramonce Taylor, who’s on the short list of the best athletes Mack Brown ever signed, right there with Vince Young, Roy Williams and Jamaal Charles. But just like Ramonce, Johnson couldn’t stay out of his own way. Mack suspended him three times in his first two seasons. Charlie Strong suspended him for the first four games of 2014 and then told Johnson he was down to his final strike before his senior year. And that season got off to a rocky start with the release of Johnson’s ill-conceived “Dealer,” a racy rap track about a street pharmacist.

“Some guys think they can do whatever they want,” Strong said last summer. “Y’all heard that rap song.”

Still, Strong later told us Johnson has come a million miles in the maturity department. His above-average hands caught 37 passes for 415 yards in six games, but then he didn’t have Colt McCoy throwing to him. His biggest two games were a five-catch, 145-yard night against Cal and the win over Rice, when he returned a punt 85 yards for a touchdown.

Who knows, Johnson may end up like former Longhorn Malcolm Brown, a back who spent most of his rookie season on the St. Louis Rams’ practice squad before being promoted to the active roster for the season finale, or like Giants safety Mykkele Thompson, who impressed timing day scouts last March with an electric 4.46 in the 40-yard dash and a 10-9 broad jump that got him selected him in fifth round with a $435,000 salary.

Or it could be over.

The odds are slim, but Johnson’s numbers will get him a look in a training camp somewhere. A better college career might have led to being a draft lock, but it didn’t happen that way.

The question will soon be answered: Can flash mature into cash?

Bohls: Now all Jordan Spieth needs to do is, well, do it again

Golden: What’s scarier for Texas — no playbook or no quarterback?