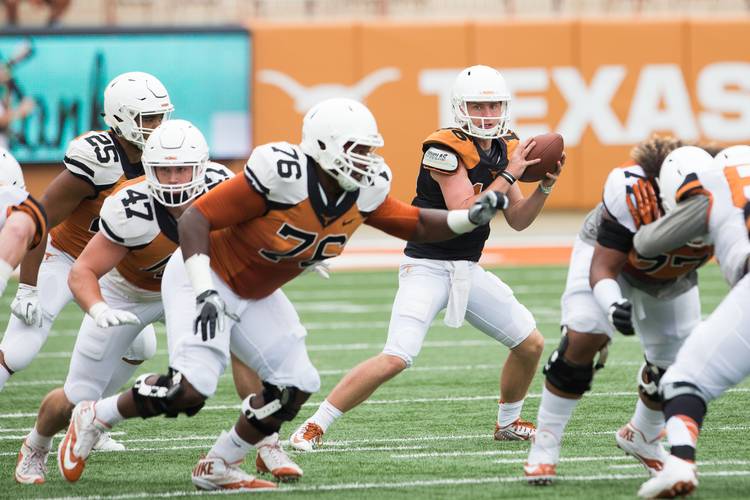 And that’s whatever test you want to use to evaluate Texas’ freshman quarterback. The eyeball test. Hitting receivers in stride. The statistical measuring stick with 22 completions for 299 yards, two touchdowns and no picks. His body language. His arm strength. His poise. Hell, his clean dorm room. You name it.

Buechele won everything there was to win in Saturday’s Orange-White Game.

Except a blanket endorsement by his coaches.

And that should come by mid-August.

Both head coach Charlie Strong and new offensive coordinator Sterlin Gilbert put off the obvious — and probably the inevitable — by all manner of excuse. They need to see the tape. Jerrod Heard sat out with a shoulder sprain. Tyrone Swoopes had two long passes dropped. Notre Dame comes in September, not in April.

But the Fighting Irish could be in Royal-Memorial Stadium next week, and it shouldn’t change what is as obvious as the fact that Strong’s Longhorns will do nothing in 2016 without a proven, competent quarterback. Buechele shows every signs of being that quarterback, and I suggest Charlie name him now. Give him all summer to galvanize the team around him.

Strong would only go so far as to say he’d like to name his starter “way before” the opener on Sept. 4.

There’s less risk in having Buechele line up behind center than there is Swoopes, who can’t catch a break and whose receivers can’t catch his passes, even perfectly thrown ones as both John Burt and DeAndre McNeal flubbed would-be touchdown bombs.

Swoopes, who is 6-8 as a starter, is a known commodity with ample chances to prove — or disprove — himself, but he can remain a highly effective weapon in his short-game package. Heard could be the capable backup if Buechele falters.

If Strong goes with Swoopes and gets mauled by Notre Dame, the fan base will be checking out Shaka Smart’s season-opener before the UTEP football game in Week Two. That could set a dark tone for Strong’s future.

By starting Buechele — with all his upside, his Colt McCoy-ish qualities, his savvy and moxie, and his comfort with this offense after having run it at Arlington Lamar — Strong might even buy himself more time with a so-so 7-5 season. Fans, and perhaps the Tower,  would be more patient if a freshman quarterback is at the helm.

And maybe they wouldn’t even need patience because they seem to have a winner in Buechele.

Golden: What’s scarier for Texas — no playbook or no quarterback?

Golden: For the Texas defense, it’s about getting stops, not breathers